END_OF_DOCUMENT_TOKEN_TO_BE_REPLACED

According to the 2016 Humanitarian Needs Overview, inside Syria, there are:

Additionally, neighbouring countries have taken in 4.7 million Syrian refugees. In the region, there are:

All figures are based on the most recent updates provided by UNHCR, available here.

Five years into the armed conflict in the Syrian Arab Republic, 13.5 million persons are in need of humanitarian assistance inside Syria, including 6.5 million internally displaced (IDPs). In addition, 4.2 million Syrians have taken refuge in the five neighbouring countries Lebanon, Jordan, Turkey, Iraq and Egypt. IOM and humanitarian partners are continuing their services to meet the challenges posed by this protracted crisis, with a particular emphasis on protection, provision of life-saving assistance, as well as early recovery and resilience of affected populations and host communities inside Syria and in the region.

The adoption in July 2014 of the UN Security Council Resolution 2165 - renewed on 17 December 2014 for 12 months (UNSCR 2191) - allowing the UN to deliver humanitarian goods from across borders has opened a new window of opportunity to reach populations in need of assistance who cannot be assisted from Damascus. At the same time, the advances made by the Islamic State of Iraq and al-Sham (ISIS) in Iraq and Syria have increased the severity of the crisis, restricting humanitarian access to some areas, while adding complex regional dynamics to the Syria crisis.

IOM launched an internal strategic Whole-of-Syria planning and programming process in 2014 to allow the organization to utilize either regular programming/cross-line (from Damascus) or cross-border (from neighbouring countries) to be able to respond to sudden displacement and unmet urgent humanitarian needs inside Syria.

As of March 2016, 233 IOM international and national staff currently work on the Whole-of-Syria operations in Syria and in the two hubs in Jordan and Turkey for cross-border activities. Inside Syria IOM has its main office in Damascus and four sub-offices in Aleppo, Al-Hasakeh, Homs, and Tartous. IOM activities take place in all fourteen governorates in Syria.

Through the Syria Humanitarian Response Plan and the Whole of Syria approach, IOM has been able to deliver humanitarian assistance in coordination with other agencies both from inside Syria and through the cross-border hubs in Jordan and Turkey.

In 2016, IOM is planning to reach over 4 million IDPs and host community members. While emergency assistance continue to be the brunt of the IOM response in the form of NFI, shelter, Wash, protection and health, increased activities are focusing on early recovery and livelihood (ERL). This includes livelihood support for vulnerable youth, debris management programming, self-reliance of vulnerable households, and rehabilitation of community infrastructures through cash-for-work schemes, targeting 64,050 beneficiaries overall.

In addition to operations inside Syria, IOM is also assisting Syrian refugees in the neighbouring countries through the Regional Refugee and Resilience Plan. Overall, 4.8 million Syrians have taken refuge in the region (UNHCR March 2016).

Targeting nearly 1.6 million refugees in neighbouring countries and the region in 2016, projects will focus on livelihood assistance, protection, education, social stability, and basic needs humanitarian assistance in the form of shelter, food assistance, health, and NFIs in particular during winter.

In 2015, IOM under the 3RP reached 727,305 direct beneficiaries with humanitarian assistance including basic needs such as NFI, shelter, and health, as well as various protection and livelihood projects to enhance resilience and sustainability within the context of the Syria protracted crisis. This included the provision of school transportation for refugee children, psychosocial activities, cash-for-work, and vocational training.

For more information on the Syria HRP and the 3RP regional response, please refer to the 2016 Appeal, the 2015 Achievements, and the IOM Humanitarian Compendium for Syria. 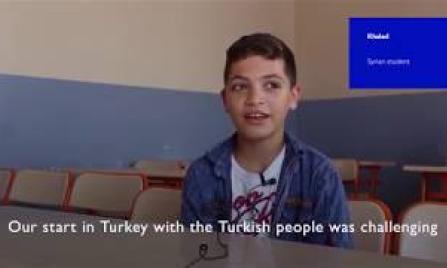