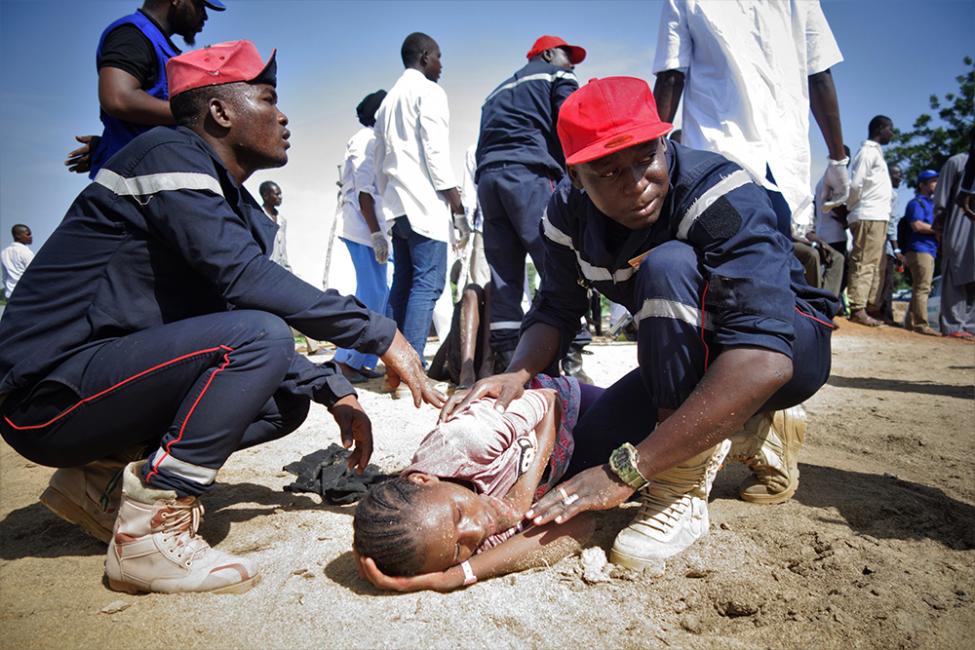 An exercise along the Niger river challenges the response of government and local communities to the sudden mass movement of people. Photo: Monica Chiriac / IOM

The exercise was organized under the project Engaging Communities in Border Management in Niger – Phase II, funded by the US Department of State. This was the fourth simulation exercise organized by IOM in Niger, having previously held similar exercises in 2017 and 2018 – two in Zinder region and one in Agadez region.

Tillabéri, site of this latest exercise, lies in a region covering southwest Niger which is regularly affected by population displacement flows. After the internal armed conflict in neighbouring Mali in 2012, over 50,000 Malians sought refuge in Niger. More recently, intercommunity clashes and the presence of terrorist armed groups in Niger triggered the internal displacement of more than 32,000 Nigeriens.

As with previous exercises, the simulation this week used a scenario conducted under real-life circumstances to test local and regional authorities’ ability to respond to a mass migration movement into Niger, precipitated by a crisis at the border.

This was the first time IOM Niger organized a simulation exercise on the Niger river, which entailed new logistical and coordination challenges. The new setting allowed for new actors to be involved in the exercise, such as the Gendarmerie’s River Brigade and the Environmental Services.

In addition to building the capacities of the authorities in responding to cross-border crises, the simulation exercise also enhanced community involvement in crisis management, as communities from the surrounding area played the roles of both displaced populations and of welcoming community.

“Such exercises provide a unique opportunity for local authorities and communities to be trained in crisis management, in real conditions, through a strong degree of realism,” said Arthur Langouet, IBM Project Manager with IOM Niger. “This is also a means to assess the needs in terms of equipment, training, and technical support for the development of crisis management tools,” Langouet added.

The exercise incorporates a strong community engagement component to foster communication between local communities and authorities. As communities are the first to directly encounter the signs of a crisis, communication with local authorities is crucial in both ensuring a quick and effective crisis response as well as preventing future crises.

The Governor of Tillabéri, Ibrahim Tidjani Katiella, expressed his gratitude towards IOM and stated that the exercise was extremely useful in building the capacity of the Regional Crisis Cell: “I look forward to our future cooperation with IOM for the development of a regional contingency plan.”

At the end of the exercise, IOM distributed 250 hygiene kits to participating community members, and handed over six tents to the Governorate of Tillabéri.

Throughout the next phase of the project, IOM will continue to support capacity building and community engagement activities in Tillabéri, building on the lessons learned through this simulation exercise. Additionally, a second simulation exercise will take place in the region of Tillabéri in 2019.