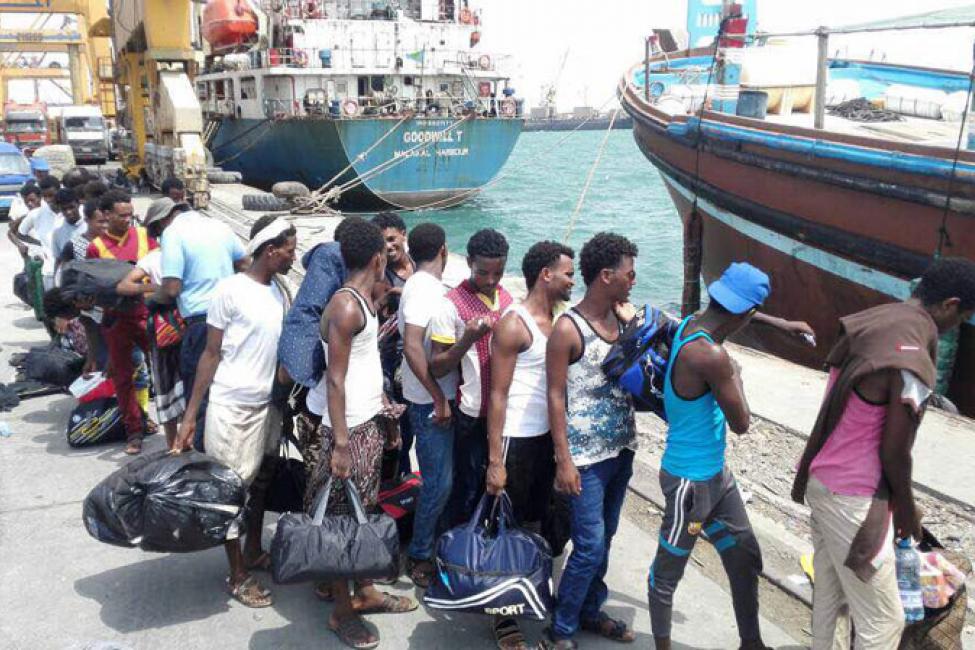 Ethiopian migrants board a boat in Yemen bound for Djibouti. Photo: IOM

Yemen - The UN Migration Agency (IOM) transported 84 stranded migrants from Al Hudaydah Port in Yemen to Djibouti on 21 May. Following a hiatus due to rough seas and security challenges, this was the first voluntary humanitarian return organized out of Yemen in two months.

Most were Ethiopian nationals. The group consisted of 29 unaccompanied migrant boys, seven women and 48 other vulnerable cases. Seven migrants had severe injuries; some were receiving medical care and temporary shelter from IOM in Sana’a, Yemen’s capital. As soon as they were well enough to travel, IOM transported the migrants by bus to Al Hudaydah earlier in the week.

Most of these migrants had intended to transit Yemen to reach Saudi Arabia but found themselves trapped in Yemen’s conflict. Many had their basic human rights violated by migrant smugglers and other criminal gangs. IOM coordinated a trip by Yemeni immigration officials to Al Hudaydah, where they met the migrants and completed the Government's exit formalities.

After a full day's travel by boat, IOM Djibouti received the passengers, provided temporary shelter, and started arranging emergency travel documents through local embassies. The IOM Djibouti team also began coordinating the final part of the journey – starting with their flights to Ethiopia.

IOM staff in Addis Ababa are on standby to provide post-arrival assistance at the airport, particularly for the most vulnerable persons, who may need longer-term reintegration support.

“Yemen is a country that has been ravaged by conflict, has collapsed public services and is now battling a cholera outbreak,” said Laurent de Boeck, IOM Yemen Chief of Mission. “Many of the migrants being helped this weekend were stranded and suffering in Yemen for months. Some had been held in government detention due to their irregular immigration status. All of the migrants are anxious to return home safely,” de Boeck explained.

Stranded migrants frequently reach out to IOM for immediate assistance, hoping for eventual safe passage home. Migrants who have been previously returned with IOM assistance tell their compatriots still stranded in Yemen to contact IOM for protection and assistance.

This latest movement, brings to 515 the total number of migrants in 2017 IOM has helped leave Yemen by sea, sailing from Al Hudaydah to Djibouti, and then onwards to their countries of origin where applicable. These operations are made possible with funding from the Federal Republic of Germany Ministry of Foreign Affairs and the United States Department of State Bureau of Population, Refugees, and Migration (PRM). Cooperation from the Governments of Yemen, Djibouti and Ethiopia has helped to make the operations a success.