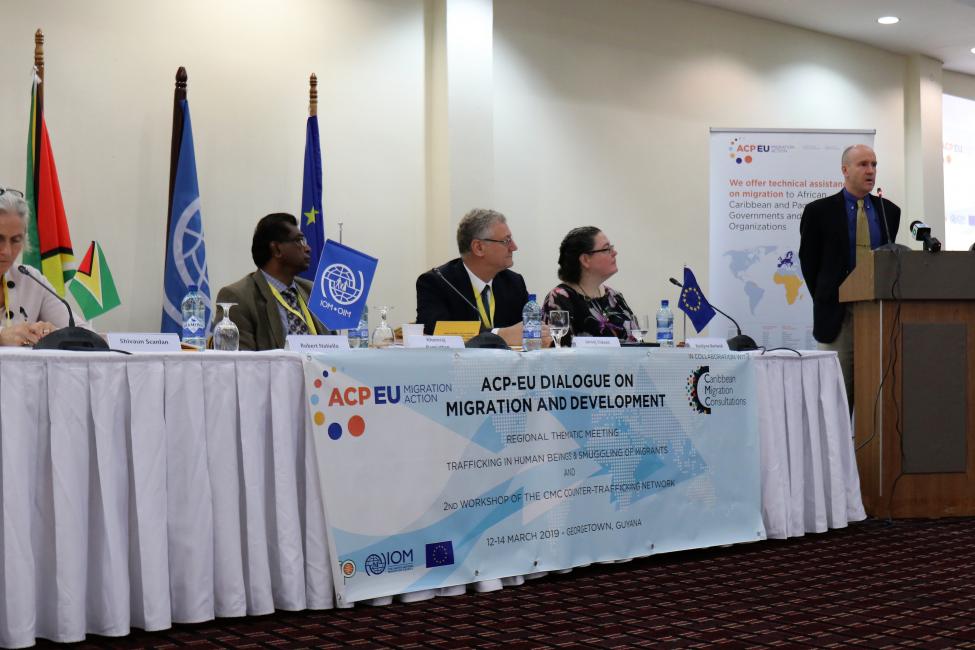 Georgetown – The International Organization for Migration (IOM) and a major Caribbean counter-trafficking network yesterday (14/03) concluded three days of exchange in Guyana on countering the scourges of trafficking in human beings and migrant smuggling, which afflict a region where the number of girl victims of trafficking is among the highest globally.

IOM, in the framework of its ACP-EU Migration Action programme, joined forces with the Caribbean Migration Consultations (CMC) Counter-Trafficking Network this week for the regional thematic meeting which brought together over 50 participants from Caribbean countries, the European Union, high representatives of international and regional organizations and NGOs, to discuss and identify effective means of countering these phenomena in the Caribbean through coordinated, regional actions.

“Trafficking and smuggling are highly profitable businesses involving criminal networks that are very hard to trace by the authorities. The Caribbean, being a diverse region of transit migration, is hit by these serious crimes which often result in grave human rights violations, affecting men, women and children alike,” said Marcelo Pisani, IOM Regional Director for Central and North America and the Caribbean.

“Increasingly, countries across the globe and in the Caribbean region are prioritizing the fight against trafficking in human beings and the smuggling of migrants,” added Pisani. “And they recognize that in doing so, we can contribute to achieving several of the UN Sustainable Development Goals.”

At the meeting, experts shared the state of the art in counter-trafficking and counter-smuggling good practices, discussed the challenges and identified solutions requiring continuing collaboration in the future. It also provided an opportunity for fruitful exchange between law enforcement and victim protection professionals, both essential to a comprehensive approach towards countering trafficking and smuggling.

“This meeting will be very important to generate recommendations specific to the region on trafficking and smuggling,” said Minister of Public Security of Guyana Khemraj Ramjattan in his opening remarks. The recommendations will also serve to inform the Dialogue on Migration and Development between African, Caribbean and Pacific and European Union countries.

IOM, through the Africa Caribbean and Pacific (ACP) – European Union (EU) Migration Action, is working to build national capacities for combating trafficking and smuggling in several Caribbean countries. The Counter-Trafficking Network of the CMC is the first regional network in the Caribbean to focus on assistance and protection of victims of trafficking as well as investigation and prosecution.

“This synergy between the Action and the CMC Counter-Trafficking Network provides an excellent opportunity to build further upon ongoing national and regional efforts to combat these crimes,” stressed Pisani.

The programme is financed by the 10th European Development Fund (EDF) and supported by the ACP Secretariat and the EU. For more information on the ACP-EU Migration Action, go to: www.acpeumigrationaction.iom.int and follow on Twitter: @ACP_EU_Action, Facebook: facebook.com/acpeuaction