Awareness-Raising Caravan Sets Off for Month-long Trip Across Niger 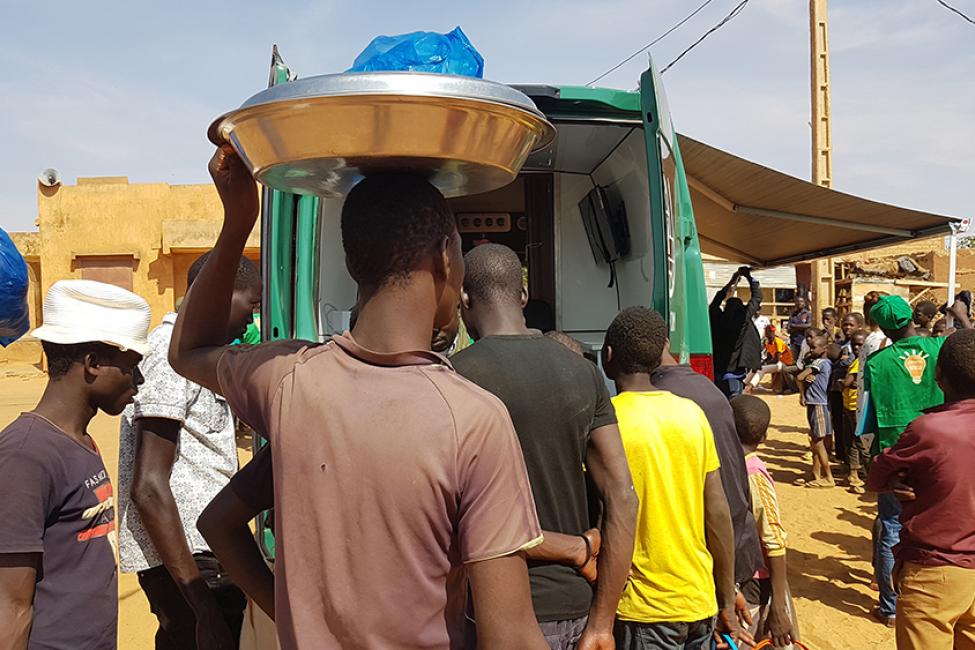 Niamey – An awareness-raising caravan called In da na sa’ni (“If only I had known” in Hausa) left Niamey yesterday (04/04) for a monthlong trip to raise awareness of the risks of irregular migration and its alternatives. The caravan will stop during its 2,300-kilometer journey in areas with a high migrant population, such as Tahoua, Agadez and Arlit, hoping to reach 150,000 people.

The caravan is part of a comprehensive awareness-raising strategy based on behaviour change communications and interpersonal communication which can ultimately contribute to social change. The concept was initiated by the International Organization for Migration (IOM) and falls under the framework of the Migrant Resource and Response Mechanism, supported by the European Union.

“The aim of such initiatives is to create a meaningful dialogue instead of limiting ourselves to one-way communication,” said Stephanie Eeckman, Community Outreach Officer at IOM Niger.

IOM has been providing migrants in transit and potential migrants with access to life-saving information since 2016 when its first orientation office opened in Agadez. This and other awareness-raising activities are implemented through IOM’s four orientation offices in Agadez, Arlit, Dirkou and Niamey, and their 50 community mobilizers (MobComs).

Since the beginning of the year, IOM’s mission in Niger has been leading several innovative outreach activities that have reached close to 35,000 people, bringing the total of migrants and community members reached to 275,000 since 2016.

“We all have a brother, sister, cousin, neighbour who has been through hell trying to cross the desert or the sea. If we do not take the responsibility to give them the correct information before they make their decision, then we have failed them,” said Harouna Koudou Abdourahmane, the agent representing the artists taking part in the caravan.

“Tonight, you made me reflect on my choices. I should have done it before I left, but it’s never too late, is it?” said Komi, a 23-year-old Togolese migrant who is currently transiting through Niger on his way to Europe. Nearly 200,000 migrants crossed Niger in 2018 and 70,000 in 2019. “I might not change my mind tonight, but I will think hard before I decide to continue the journey,” he added.

The caravan will use a variety of tools and will work with local NGOs, community associations and artists for its various outreach activities along the route in order to engage both migrants and host community members.

“I will never take that road. Watching the documentary and hearing that man talk about how he almost died on this journey makes me wonder, why take that risk? No dream is worth dying over,” said Salimat, a 19-year-old who has already pondered leaving his native Niger looking for better opportunities.

IOM’s outreach activities are supported by the Danish International Development Agency (DANIDA) and the EU-IOM Joint Initiative for Migrant Protection and Reintegration in the framework of the Migrant Resource and Response Mechanism (MRRM), funded by the EU Emergency Trust Fund for Africa.