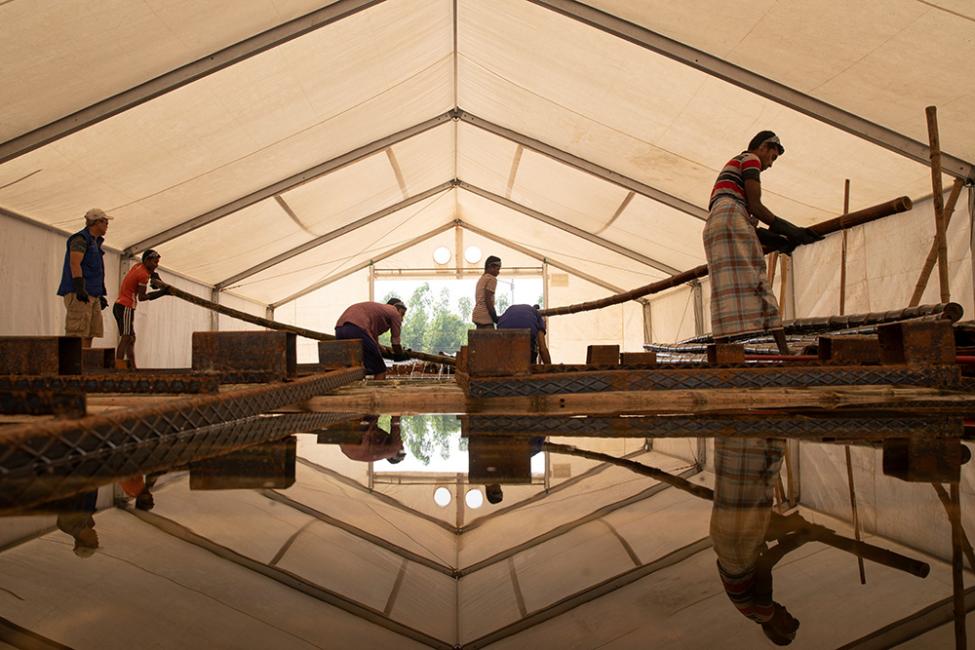 Cox’s Bazar — Work has begun on one of the largest bamboo treatment plants ever installed in an emergency response, as IOM experts tackle a tiny insect that is devastating structures in the world’s biggest refugee settlement.

An infestation of “boring beetles” means the bamboo in almost every shelter in the Rohingya refugee camps in Cox’s Bazar – home to around 240,000 families – needs to be replaced. With just over four months to go until the beginning of the next monsoon season, the race is on to provide families living in the worst-affected shelters with new, more-durable bamboo.

To help meet the challenge, IOM has launched a new treatment facility in the south of Cox’s Bazar, which will be scaled up over coming weeks until it has the capacity to treat around 40,000 pieces of bamboo per month – sufficient to upgrade between 6,000 – 7,000 shelters.

“This is a major project, and one which will help ensure that the refugees do not have to live with the constant threat their shelters will collapse due to damaged bamboo,” said Manuel Pereira, IOM’s Emergency Coordinator in Cox’s Bazar.

Treatment at the plant relies on boron – a natural substance which will be filtered and recycled on site then reused to minimize environmental impact. Plant residue from the treatment process can be used as a fertilizer by nearby farms.

“We use bamboo because it’s cost effective and grows naturally in Bangladesh,” said Yoga Sofyar, a bamboo expert working with IOM, who helped establish the treatment plant. “But once the infestation became apparent, something had to be done. This affects many people and involves a significant amount of money, so we need an effective durable solution. But no one has done anything on this scale before. That has been the challenge.”

Almost a million Rohingya refugees are currently sheltering in Cox’s Bazar. They live in a rapidly constructed city of bamboo and tarpaulins built on the hills of a forested nature reserve in late 2017 after violence in Myanmar drove hundreds of thousands of people across the border into Bangladesh in just a few weeks.

During the emergency response in the weeks and months that followed, millions of pieces of bamboo were brought in from across the country to help build life-saving shelters and medical facilities. Bridges, steps and handrails were also built with bamboo to keep vital access ways open and to shore up vulnerable slopes.

But the scale and urgent need for supplies to upgrade shelters ahead of monsoon, meant organisations were forced to rely on young bamboo that is more susceptible to attack by insects.

“Even with the untreated bamboo IOM used, we would normally have expected the material to last between one to three years. But the infestation is so large and spread so quickly that within six months major damage had already taken place,” said Sofyar.

While the infestation was evident in the dusty residue that covered the bamboo under attack, identifying a solution was less easy. According to Sofyar, bamboo is a traditional construction material in Bangladesh, but its popularity has declined in recent years and there was not sufficient, high quality treated bamboo available.

The answer, IOM experts decided, was to treat the bamboo themselves. But first a suitable site had to be found, as well as a treatment method, that could practically be scaled up to meet the immense demand, with minimal environmental impact.

Following the identification of a site in the south of Cox’s Bazar – close enough to the camps to allow easy transportation, but outside the already overcrowded refugee settlement, a pilot project construction of the treatment facility was launched with funding from the UK, USA and Sweden. With the first four treatment tanks now operational, and a pilot project undertaken, expansion work is now underway.

Installation costs for the plant will be USD 500,000. Operational costs for the next 12 months to allow 100,000 families to upgrade the six core structural poles in their shelters will total USD 2 million.

The treatment extends the bamboo’s durability from months to many years. If shelters are taken down or moved, the treated bamboo can be reclaimed and reused for other purposes, according to Sofyar. “Once it is completed, this will be one of the largest bamboo treatment plants ever installed in an emergency response and we will share the knowledge and experience we have gained here with our partners in Bangladesh and other organisations around the world,” he noted.

The project has also been boosted by the efforts of Rohingya refugees working in a cash for work project. Many were skilled in bamboo craftmanship in Myanmar and are happy to be able to use techniques passed down to them through generations to use in their current situation.

“My father and grandfather used to work with bamboo and wood. In Myanmar I worked with my father and that is how I learned my skills,” said Mohammed Younus, one of the refugees working at the plant. “I feel good being able to do this work here and use my skills to earn some money for my family,” he added.