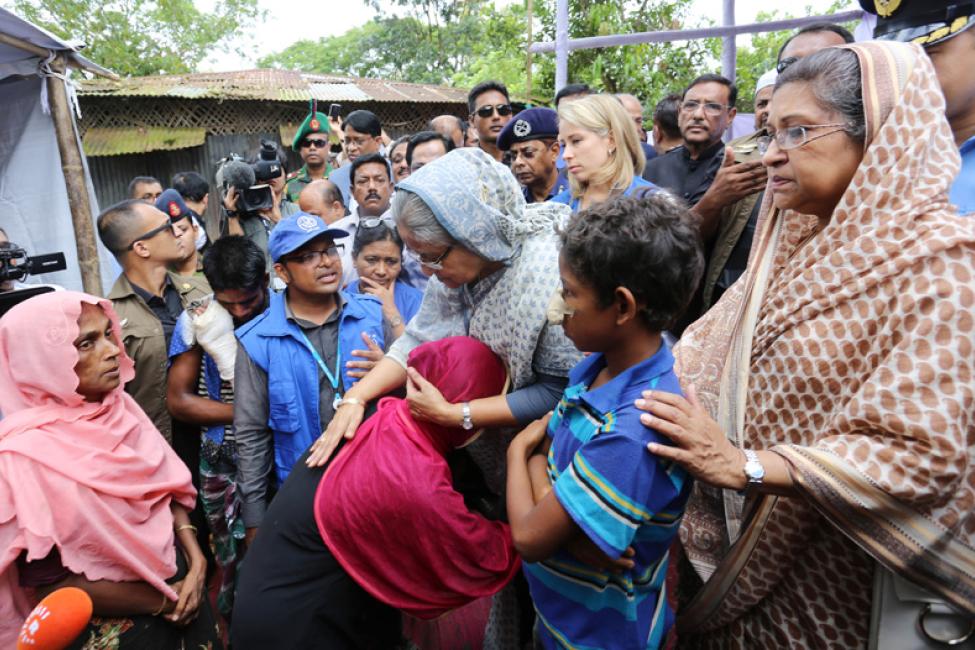 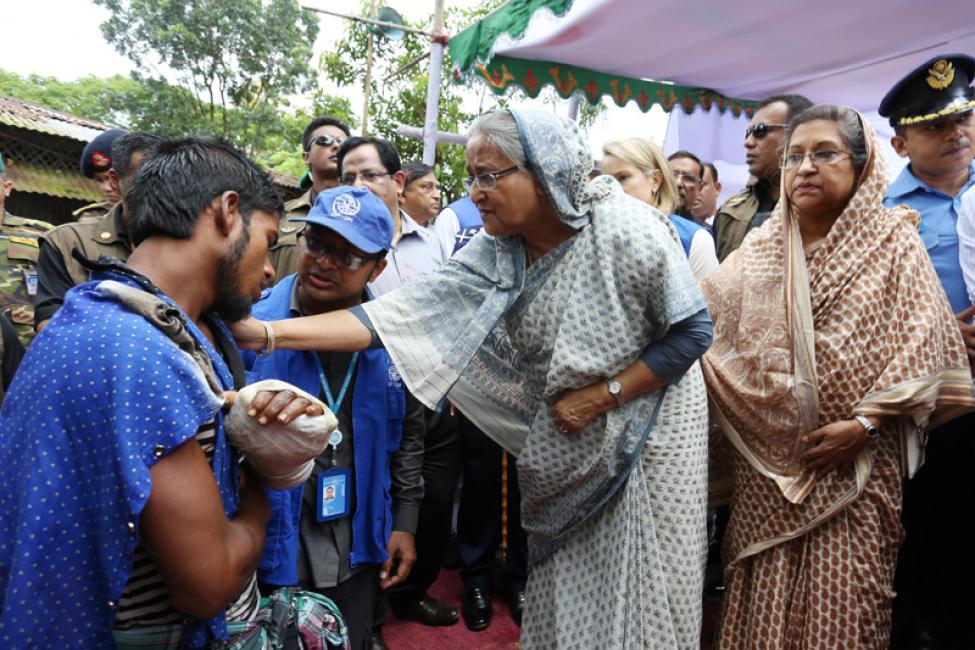 Cox’s Bazar – IOM, the UN Migration Agency, yesterday welcomed a visit by Bangladesh Prime Minister Sheikh Hasina to assess the unfolding humanitarian crisis in Cox’s Bazar. An estimated 370,000 people have fled to the district from neighbouring Myanmar to escape violence since August 25th.

The Prime Minister, accompanied by top officials from her administration, visited Cox’s Bazar to study the worsening humanitarian situation and meet people sheltering in the Kutupalong Refugee Camp.  “We have to give them shelter...food, medication...[for] as long as [Myanmar] doesn't take them back. They are human beings, we cannot just push them back...we are humans [too],” she said.

Speaking with some of the recent arrivals through IOM interpreters, the Prime Minister was visibly saddened by what she heard and asked both members of her government and international agencies to step up support to the most vulnerable of the new arrivals.

IOM is continuing to work closely with the Bangladesh government and is rapidly scaling up its response in a humanitarian crisis that has left existing support structures in Cox’s Bazar reeling. The influx appears to be continuing, with many new arrivals still on the move, and thousands more reportedly waiting to cross the border into Bangladesh.

Many new arrivals are moving from road side encampments, mainly in the southern tip of Cox’s Bazar district, into new spontaneous settlement areas, which are starting to emerge.

Many others are also starting to settle on 1,500 acres of land near the Kutupalong Makeshift Settlement, which the government has demarcated for the temporary settlement  of new arrivals.

The local administration has been broadcasting messages to people camping on roadsides to move to the proposed new settlement area, and humanitarian agencies are gearing up to provide support at the location.

Local communities at the site are sympathetic towards the new arrivals, with the local mosque committee, political and community leaders providing basic assistance, including food, shelter and transport.

New arrivals in all locations are in urgent need of life-saving assistance, including food, water and sanitation, health and protection. According to planners, a rapid, comprehensive multi-sector response is now needed, including 60,000 shelters, 4.5 million litres of water per day, 15,000 latrines, and 1.5 million kilograms of rice per month.

On Sunday IOM appealed for USD 26.1 million to address lifesaving needs through the end of 2017. The IOM appeal is part of a broader appeal (ISCG Preliminary Response Plan) for USD 77.1 million by all Inter Sector Coordination Group (ISCG) agencies operating in Cox’s Bazar.

The United Kingdom Department for International Development (DFID) has agreed to provide IOM with USD 1.15 million. The European Commission (EC) has also committed EUR 3 million to help address the most pressing needs of the new arrivals.

IOM has also allocated USD 2.5 million from its own emergency response fund. Earlier, the UN Central Emergency Response Fund (CERF) confirmed an allocation of USD 7 million across multiple agencies in response to the ISCG appeal. But the funding shortfall is still significant and is likely to increase as people continue to arrive from Myanmar.

ISCG agencies conducted a joint rapid assessment last week and the group is expected to develop a full operational plan incorporating the needs of all Undocumented Myanmar Nationals  and registered refugees in Cox’s Bazar through the end of 2018.