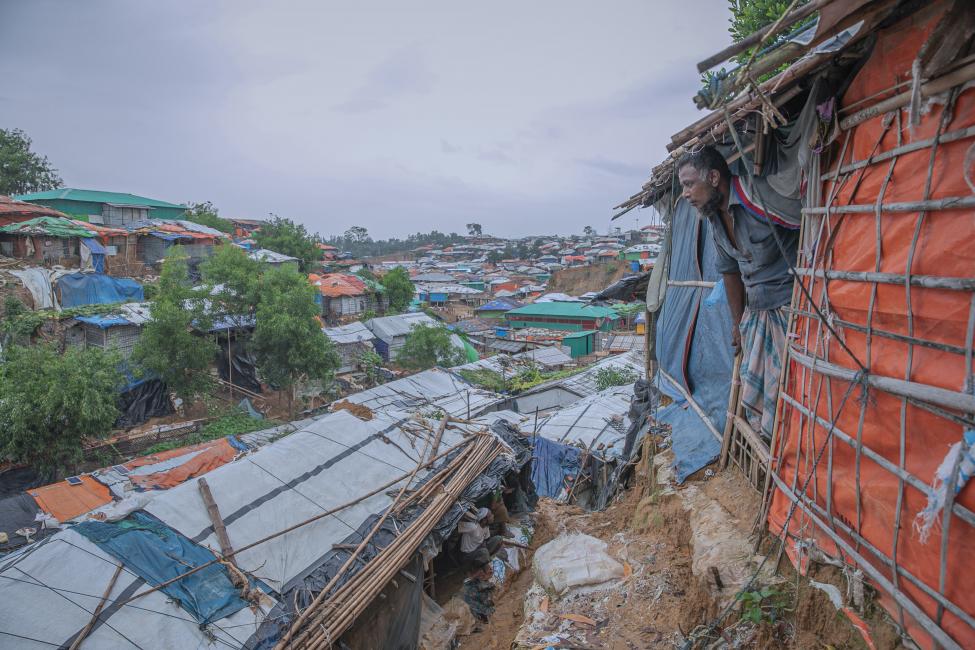 Cox’s Bazar – Unrelenting rain and winds are continuing to batter the Rohingya refugee camps of southern Bangladesh, displacing thousands of people, damaging homes and infrastructure, and increasing the risk of waterborne illnesses. The severe monsoon rains, which have pounded Cox’s Bazar since July 4th are the worst weather the district has experienced for over a year.

“The rain and wind are causing misery on the ground and our teams are working day and night to provide emergency services and relocations to affected people. While we are grappling with the immediate effects of the storms, we still have to remain focused on long-term disaster management," said IOM Bangladesh Deputy Chief of Mission Manuel Pereira.

“IOM supported nearly 6,000 people with emergency items and trained 570 in emergency response on 9-10 July 2019. But we recognize that this storm system is having a major impact on people in the camps and we are only half way through the monsoon season,” he added.

In the past 48 hours, IOM teams have distributed 5,079 plastic tarpaulins to families impacted by the storms. A total of 152 mm of precipitation was recorded in the Kutupalong mega-camp over the past 24 hours.

IOM and its humanitarian partners are continuing to monitor weather and assist affected communities as needed. With rains continuing this morning, IOM engineers are concerned about worsening damage to paths, bridges and drainage systems, if weather conditions do not improve.

As of last night, 998 individuals and 912 households had been impacted by severe weather over the previous 24 hours. IOM teams reported six landslides, eight wind storms and a total 174 people displaced.

ISCG – the coordinating body for aid agencies operating in Cox’s Bazar – says that monsoon-related damage this year could be far worse than in 2018. It reports:

Over 45,000 individuals have been affected since the end of April due to weather-related incidents, compared to 55,000 affected during the whole of last year’s monsoon season.