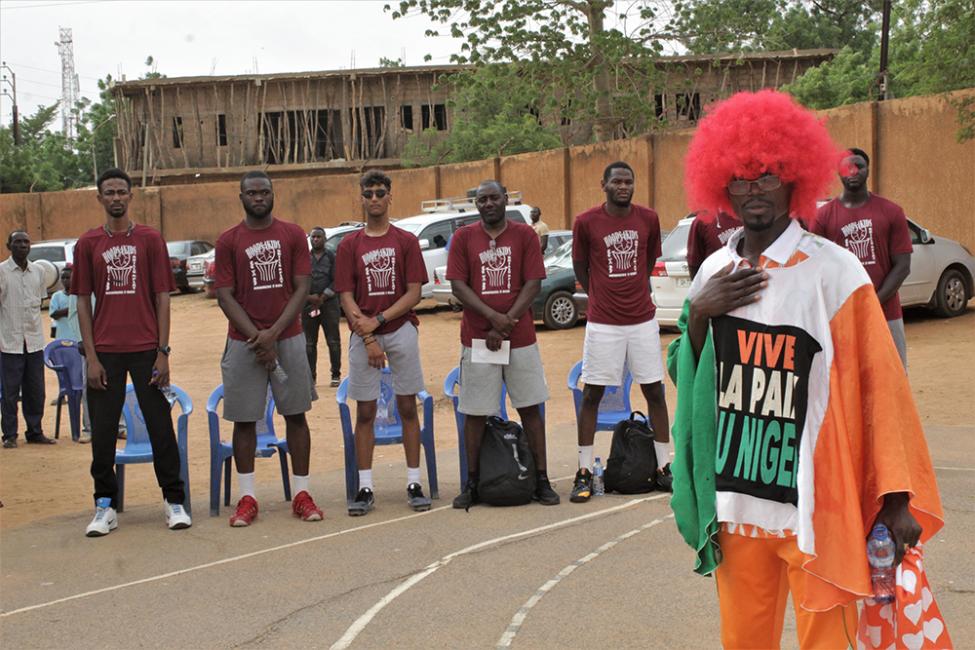 Niamey – Back in 1993, Yacouba Sangaré was playing for Niger’s national basketball team. A talented student-athlete, Sangaré’s promise was acknowledged with an opportunity to further his education in the US. In 2001, he graduated from Harvard Graduate School of Education with an advanced degree in International Education.

A few years after settling in the US, Yacouba and his wife, Tracy, launched Hoops4Kids, a basketball summer camp for young Nigeriens. Since 1997, Hoops4Kids has launched programmes in Niger, Benin, the United States and Mexico. In the over 20 years since their programme began, Yacouba and Tracy have launched more than 2,000 young people into better futures through sport.

This month he was back again. From 9 to 13 July, IOM supported a Hoops4Kids basketball summer camp in Niger’s capital, Niamey – its 22th since 1997 – thanks to support from the European Union, within the framework of the Migrant Resource and Response Mechanism.

The programme aims to give young people aged 4 to 17 an opportunity to develop their athletic skills, meet peers from other cultures and learn how to take care of their health and enjoy physical activities as they broaden their own horizons. During 2019’s edition of Hoops4Kids in Niamey, each of the 40 participants enjoyed full board and lodging, as well as a full complement of basketball equipment and sport accessories.

“This basketball camp means a lot to us young Nigeriens. I hope that through experiences like this, I can one day fulfil my dream of playing for the NBA,” affirmed Mahamadou, one of the participants from Niamey.

The multicultural exchange and social dynamic of the programme have always stood at the core of Hoops4Kids. This year, five migrants from IOM’s transit centre in Niamey also took part in the basketball summer camp. Mohamed has been at the centre for a few weeks now as he patiently awaits to return to the Central African Republic, through the Assisted Voluntary Return and Reintegration (AVRR) programme, also under the EU-IOM Joint Initiative for Migrant Protection and Reintegration.

“You have to participate in things like this because you don’t know what you can become in life. You can be a basketball player tomorrow, and what we have learned here might help us someday,” said Mohamed, who came from the transit centre.

By bringing together participants from different nationalities, the camp also provides IOM an opportunity to disseminate messages on safe migration. Throughout the week, IOM’s community mobilizers or ‘MobComs’ organized film screenings, debates and facilitated interactions between participants.

Hoops4Kids works with multiple partners, including basketball leagues, youth organizations, authorities, embassies and international agencies. Yacouba takes the time each year to meet with relevant authorities and organizations in order to evaluate the programme and discuss the strengths, challenges, and next steps of the programme.

While the programme hopes to raise enough money to continue to send young Nigeriens abroad, either to study or to attend sport camps, this year's participants were excited to even get to play with professional players.

Adam, 21, is one of eight coaches training the kids in this year’s edition. Yacouba recognized his talent early on while and did his best to find opportunities for Adam to develop his skills abroad.

Adam now plays competitively in the USA for Oklahoma’s Murray State College. “Kids today need to know that education is the most important thing for their future,” Adam says.

Adamou, IOM’s Medical Clerk for the past two years, certainly agrees. He could be seen cheering from the sidelines during the camp’s finale. “I am part of the 1997 Hoops4kids promotion,” Adamou said. “I may not be a professional basketball player now, but the camp did shape me into who I am today.”