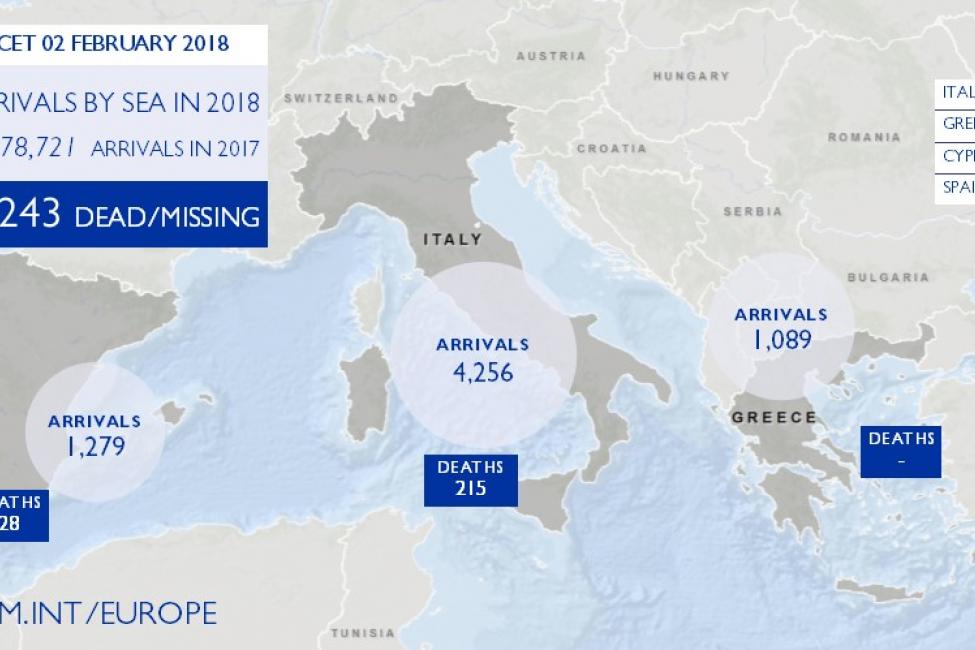 Geneva – An estimated 90-100 migrants are reported to have been on board a boat, when it capsized off the coast of Libya on Thursday evening (01/02). According to IOM Libya’s Olivia Headon, 10 bodies are reported to have washed up on Libyan shores –  one Libyan woman and reportedly some Pakistani nationals. Two survivors are reported to have swam to shore, while another was rescued by a fishing boat, Headon said. IOM is working to get more details of the tragedy and to see how best to assist survivors, she continued.

In 2017, the 3,138 Pakistani migrants arriving by sea to Italy from Libya were 13th in the overall list of migrant arrivals (119,369). This year though, they already are the third highest nationality so far, with an estimated 240 reaching Italy in January. In comparison, only nine Pakistanis arrived in Italy by sea in January 2017. According to IOM’s Missing Migrants project (MMP), there were no confirmed deaths of Pakistani or Libyan nationals in the Mediterranean in 2017. In 2016, MMP recorded that 8 Pakistani nationals went missing in the Eastern Mediterranean in a shipwreck on 14 March 2016 near Kos, Greece.

This latest tragedy comes as IOM, the UN Migration Agency, reports that 6,624 migrants and refugees had entered Europe by sea through 28 January. This compares with 5,983 coming ashore during a similar period in 2017. Italy accounts for approximately 64 per cent of the total, with the remainder split between Spain (19 per cent) and Greece (16 per cent). IOM Rome reported Thursday (01/02) that survivors of a shipwreck that occurred last weekend arrived Tuesday in Augusta, Sicily. According to testimony gathered by IOM staff at their landing point, the total number of victims may be between 32 and 37, in addition to at least three deaths confirmed from the incident.

IOM’s Flavio Di Giacomo reported the migrants left Zuwara, Libya, on Saturday at around midnight, on a dinghy carrying about 130–135 people. On Sunday morning their boat started to take on water. The ship Aquarius arrived in time to save 96 people, as well as to recover the remains of two passengers, both mothers who left children among the survivors.

Additional reporting by IOM’s Missing Migrants Project (MMP) indicates that even before the SOS Méditerranée’s vessel recovered those remains off the coast of Libya, 11 more migrants had already been evacuated to the nearest hospital – in Sfax, Tunisia – by an Italian Navy Helicopter. One of those 11, a woman, died upon arrival.

These casualties bring to 246 the total number of fatalities on the Mediterranean Sea through the first month of 2018. That compares with 254 at this time in 2017.

IOM Libya’s Olivia Headon reported that 252 migrants were returned to Libyan shores on Wednesday (31 January). Some 226 men, 19 women – four of them pregnant – and 7 children had been aboard two rubber dinghies headed for Europe, she explained.

“IOM provided food and water to the group when they were back on land and treated those in need of emergency medical assistance,” Headon added. “IOM will follow up on each individual case to see what further assistance and protection can be provided.”

Headon also reported that a separate group, this one consisting of 23 migrants, was being returned to Libya on Thursday (01/02) afternoon. One child was in the group, as well as two pregnant women, one of whom is likely to give birth in the coming days, said Headon.

The 246 deaths this month – the second deadliest on the Mediterranean since June 2017 – points to the randomness of danger along this busy migration corridor. The previous month (December 2017), when 23 deaths were recorded, was the least lethal of any recorded by IOM since January 2014, while the normally busy months of July, August, September and October last year all recorded fatalities below 200 each.

“Of course, there is no way to predict the number of deaths we record – almost all migrants who die in the Mediterranean are victims of chance,” said Julia Black, coordinator of IOM’s Missing Migrants Project, “but it is heart-breaking that so often dozens, sometimes hundreds of deaths occur in a single day. While the deaths of these migrants are unpredictable, there is an undeniable trend of tragedy in the Mediterranean.”

The Missing Migrants Project has recorded more than 3,000 migrant deaths in the Mediterranean each year since 2014. Black added that the 28 deaths recorded in January off Spain were the same number recorded in that region in January 2017. Not a single death was recorded in Greek waters so far this year, while only one was confirmed a year ago on that route (see chart below).

Worldwide, IOM’s Missing Migrants Project (MMP) has recorded the deaths or disappearances of 396 people during migration through 31 January this year, compared with 545 through this date in 2017 (see chart below).

Among those fatalities confirmed during recent days were two children who drowned in the Indian Ocean after the boat in which they were travelling from Comoros Islands to the French island of Mayotte capsized on 22 January. One more child remains missing from that incident in which it was reported 11 survivors were rescued.

In Central America, one young man was found dead last Saturday (27/01). His remains were discovered alongside highway 150 between Orizaba and Tehuacán in near the border of the Mexican states of Veracruz and Puebla. Additionally, one death was recorded in Europe on 29 January: a young man was struck by a vehicle on the E40 motorway near Jabbeke, Belgium.