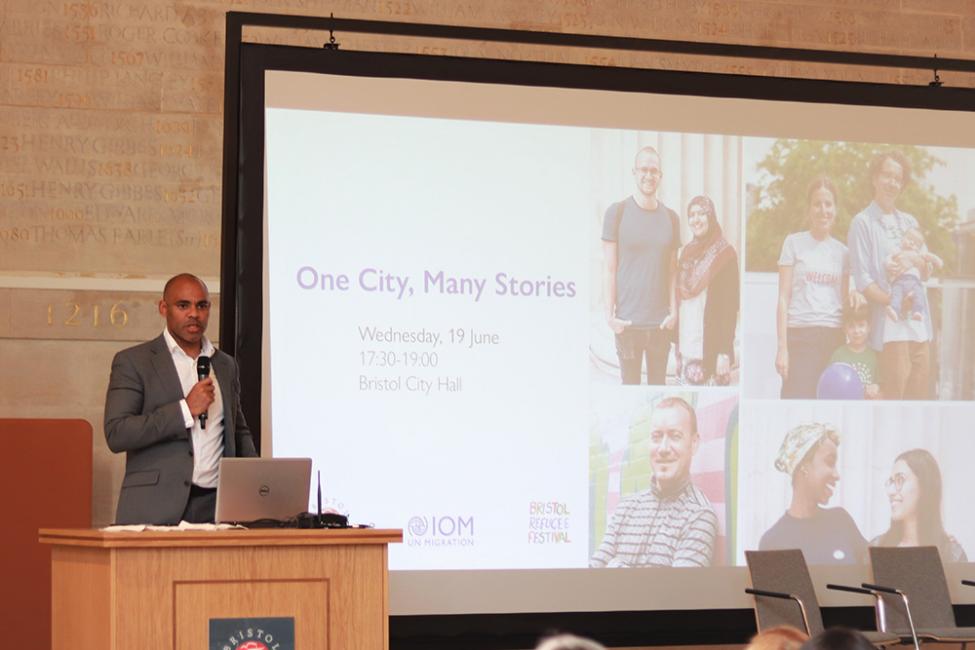 Bristol – Cities are at the forefront in managing the benefits and the challenges migration and inclusion can bring. In Bristol, one of the UK’s most diverse cities, nearly 200 migrant, refugee and local community members shared their experiences and perspectives in an event – One City, Many Stories – marking Refugee Week in the UK.

“As the first European elected Mayor of African descent, I’m proud to lead a city that strives to be inclusive and welcoming for all its residents,” said Bristol Mayor Marvin Rees.

The 19 June event hosted by Mayor Marvin Rees partnered the International Organization for Migration (IOM) and the Bristol Refugee Festival.

“Inclusion is not something that happens quickly or easily, and it can’t be ‘delivered’ by the Local Authority. It required a constant dialogue and collaboration between communities and organisations across the city, and that’s why this event is so important,” Rees continued.

“How newcomers – migrants, refugees or anyone – perceive a new community can influence their own willingness to participate in society once they arrive,” said Dipti Pardeshi, IOM UK Chief of Mission.

A recent study by The Challenge found that 44 per cent of British people report that none of the contacts they spend time with socially are from a different ethnic background.

With 16 per cent of its population born outside the UK and over 91 languages spoken on its streets, Bristol is one of the UK’s most multi-cultural cities. Over 6,000 people attended a recent Grand Iftar street party in East Bristol.

Pardeshi explained that people who engage in social interactions with people of different backgrounds often have a more positive view and greater empathy towards them.

“With the right policies and structures in place, migrants and refugees can bring fresh ideas, resources and perspectives that contribute economically, socially and culturally to local communities,” Pardeshi continued.

“Creating a variety of spaces for incoming and host communities to come together is a key part of our Festival,” says Jules Olsen, Bristol Refugee Festival Director.  “We are extremely pleased to have this conversation around inclusion within our programme as the more that we talk and listen the more we can understand and value one another to create strong cohesive communities.”

To mark Refugee Week, IOM also exhibited Holding On virtual reality at London’s iconic Victoria and Albert museum on 16 June and will partner with Together Productions in the third Singing Our Lives concert at London’s Southbank Centre on Sunday, 23 June as a final event to Refugee Week.