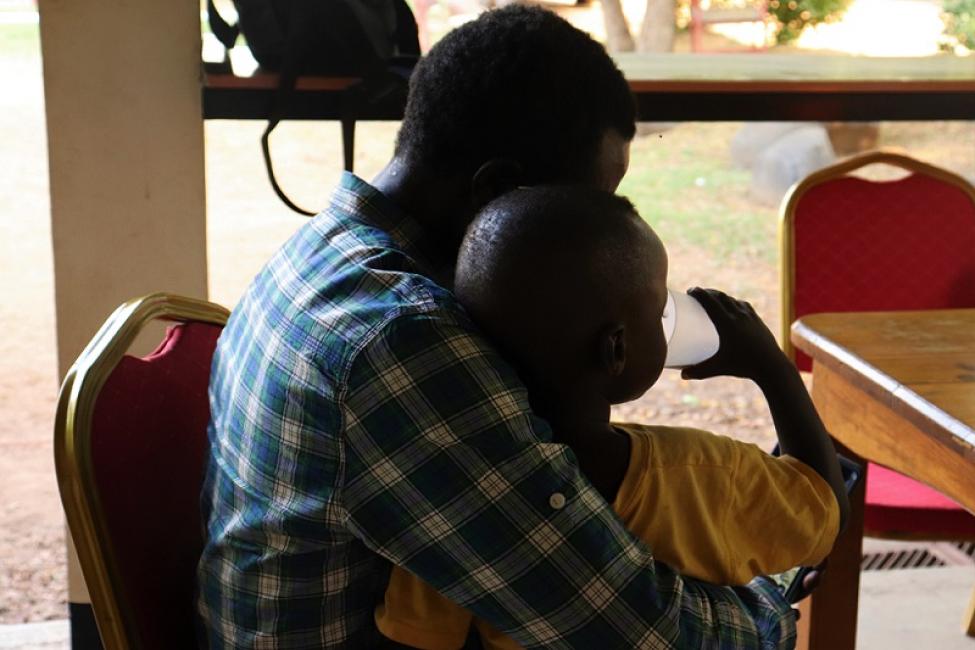 Father and child were reunited Thursday afternoon in Juba, nine weeks after the boy went missing in an incident that claimed the lives of two IOM volunteers on Oct 27 in Isebi, South Sudan. IOM has learned that a third volunteer who disappeared at that time has also died. IOM Photo/Liatile Putsoa

Juba - A four-year-old boy taken when fighting broke out between armed groups in Isebi, South Sudan on 27 October, has been released and was today reunited with his father in an emotional meeting in the capital Juba.

The child, whose name is being kept confidential, is the son of a female International Organization for Migration (IOM) volunteer who was killed along with a male colleague when they were caught in the exchange of gunfire. A third female IOM volunteer who disappeared along with the child died later of her injuries, IOM has learned.

“We are very grateful that the boy is safe and relieved that this ordeal that has been ongoing for almost ten weeks is finally over,” said IOM South Sudan Chief of Mission, Jean-Philippe Chauzy.

“The boy has been reunited with his father and our primary focus now is to ensure that they both receive counselling.”

The UN Migration Agency thanked the International Committee of the Red Cross for the invaluable support and pivotal role it played in facilitating the safe return of the child as well as a UN agency that is providing counselling services to the boy and his father.

The child’s mother was working at the IOM Ebola Virus Disease (EVD) Point of Entry screening site in Morobo.

“While we celebrate the safe return of the little boy, our hearts are heavy because we have learned that our volunteer who was taken at the same time has passed away,” said the IOM Chief, Jean-Philippe Chauzy.

Following the incident in October, IOM suspended EVD screening at five points of entry sites, namely Isebi, Bazi, Kirikwa, Lasu and Okaba. Operations in two sites, Bazi and Okaba were restored on 18 November 2019 while the three remain closed due to ongoing insecurity, particularly near Lasu.