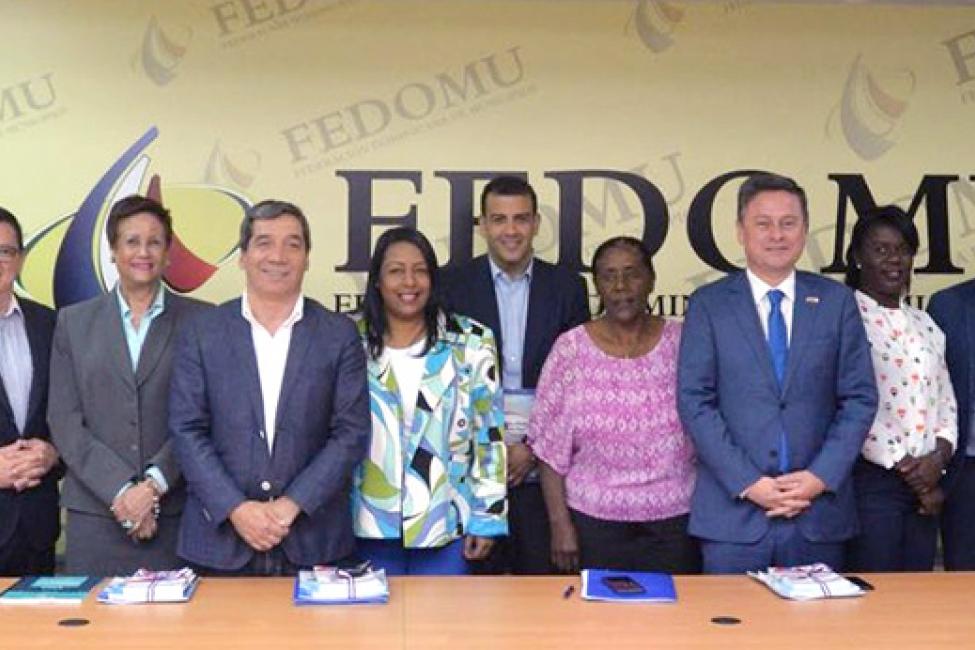 Mayors from Chile and the Dominican Republic will discuss migration and local development in Santo Domingo, as part of the IOM project “Migrants and Cities”. Photo: FEDOMU

Santo Domingo — Mayors of three Chilean cities arrived yesterday in the Dominican Republic to participate in several meetings with approximately 200 Dominican mayors in which they will discuss the link between migration and local development. The meeting is part of the Migrants and Cities program implemented by IOM Chile since 2014.

Since 2010, around 18,000 Dominicans have received a Chilean visa. Two out of every three of these migrants are women, and 75 per cent of Dominicans living in Chile are between the ages of 15 and 44 years. They have settled mainly in the Chilean capital and mostly work in the services sector.

Given the increased migrant flows, Chilean cities have generated public policies to integrate migrants into local development. Such strategies include ensuring access to education and facilitating health care for immigrants.

Supported by the IOM Development Fund (IDF), the National Institute of Migration (INM) of the Dominican Republic, and the Dominican Federation of Municipalities (FEDOMU) organized this exchange between both countries. The three participants from Chile were Álvaro Ortiz, mayor of Concepción, who also represents the Association of Municipalities of Chile (AChM); Gonzalo Durán, Mayor of Independencia, and Rodrigo Delgado, Mayor of Estación Central and President of AChM's Commission of Migratory Affairs. Two of these mayors represent the Metropolitan Region, where 79 per cent of the Dominican migrant population is concentrated.

"Furthermore, we have seen that a fundamental change of immigration towards the Dominican Republic is its urban character. Therefore, the importance of creating spaces to dialogue and direct attention to the challenges confronted by local governments in the face of the emigration of their citizens, the link with the diaspora and the arrival of immigrants and their participation in local development," Baca added.

"These exchanges empower and validate spaces of high importance for the integration and social inclusion of migrants from a local level," said Norberto Girón, IOM's Chief of Mission in Chile, who is accompanying the Chilean mayors.

Girón added, "On the other hand, it is a substantive effort that is made in coordination with the Chilean Association of Municipalities, through a cooperation agreement signed in January of this year with its president Felipe Delpin."