Close to 20,000 Migrants Rescued in Sahara Desert Since Beginning of Operations 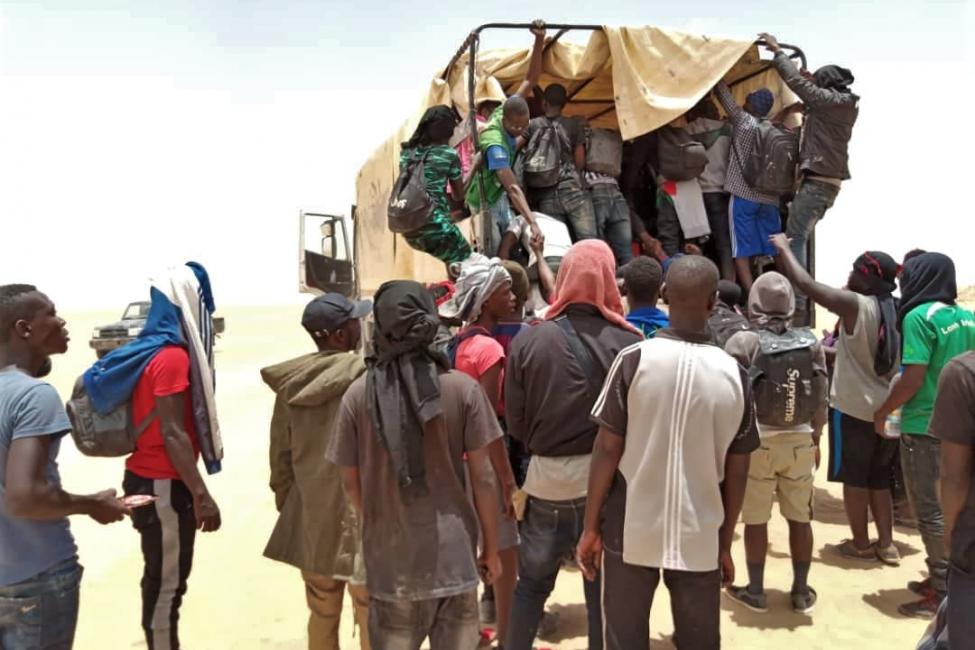 Niamey – The June 15 rescue of 406 migrants including seven women and four children stranded in the Sahara Desert brings to nearly 20,000, the number of people the International Organization for Migration (IOM) has rescued there since April 2016.

“We walked for hours under the scorching desert sun with no water or idea where we were heading,” said 27-year-old Amadou from Mali.

“Suddenly, I saw the IOM truck coming our way. They gave us food and water and brought us to Assamaka, and then Arlit the following day.”

Video of the Rescue English | French

The latest rescues included people from 14 West African countries, mainly Guinea-Conakry, Mali and Côte d’Ivoire bound for north Africa. They were transported to the town of Assamaka where IOM’s team, one Focal Point, four community mobilizers (MobComs), two nurses and one driver, are based.

“Despite having assisted so many groups of migrants, I still find it difficult every time a new group arrives, with newborns in their arms, faces covered in sand and their clothes ripped apart,” said IOM’s local Focal Point Alhassane Adouel.

“After so many arrivals, it still breaks my heart to see what they have to go through.”

The latest operation was IOM’s 189th humanitarian mission into Niger’s Ténéré desert. Trucks carrying migrants north frequently break-down in the desert; in other cases, they become lost or the smugglers simply abandon people to their fates.

No one knows how many migrants have died attempting to cross the Sahara.

IOM’s operations are supported by the United Kingdom’s Department for International Development (DFID) and the European Union, within the framework of the Migrant Resource and Response Mechanism.

They receive emergency humanitarian assistance from IOM including food, water, medical first aid and psychosocial support at the Organization’s emergency shelter. Migrants are then sensitized by the MobComs about available assistance and are offered transportation to Arlit, a large urban centre 235km away.

Once at IOM’s transit centre there, migrants who wish to return to their country of origin can join the Assisted Voluntary Return and Reintegration (AVRR) programme under the EU-IOM Joint Initiative for Migrant Protection and Reintegration.

Nighty-eight per cent of rescued migrants, including Amadou have chosen to do so.

“Many people struggle or die along the way: men, pregnant women, children. I don’t want to become one more body buried in the desert. I’m going home now,” he explained.

These humanitarian operations are performed both proactively and reactively in the areas of Agadez, Arlit and Dirkou. IOM and the Direction Générale de la Protection Civile (DGPC) have conducted joint search and rescue (SAR) missions in Dirkou since 2017. For proactive missions, teams are dispatched on current migration routes to search for migrants in distress.

“The challenging operating environment, the dangerous security situation and sudden large influxes of migrants continuously test IOM staff’s rescue efforts. But our team here in Niger has so far always managed to adapt to surprise changes, and we are monitoring the situation closely with our partners to ensure migrants in distress are assisted and protected before it is too late,” said Martin Wyss, IOM’s Chief of Mission in Niger.

“We are more than satisfied that we have prevented countless deaths and proud to have been able to provide safety and at least some comfort to thousands,” he continued.