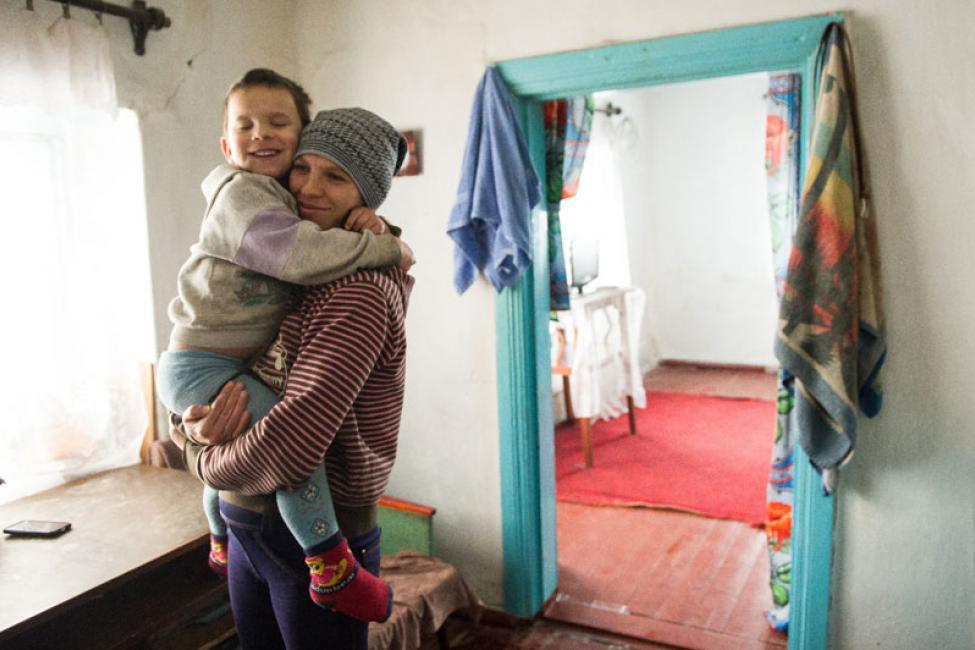 Half of IDP households in Ukraine are families with children. Photo: IOM / V.Shuvayev

Half of IDP households in Ukraine are families with children. Photo: IOM / V.Shuvayev

On average, income per IDP in Ukraine is 1,991 Ukrainian Hryvnia (UAH) or USD 75 per month, or approximately USD 2.50 per day. But some are even worse off, with 21 per cent surviving on less than two dollars a day. The average price of a loaf of bread in Ukraine is USD 0.40.

As of April, Ukraine’s Ministry of Social Policy has registered 1,583 million IDPs since 2014. Since the beginning of the crisis in Ukraine, IOM has provided support to some 138,000 conflict-affected people. Its current focus lies in providing income opportunities for IDPs and conflict-affected populations, and facilitating social cohesion, recovery and peacebuilding.

There are a few positive notes in IOM’s new survey. The level of IDPs being employed has slightly increased from 35 per cent in March 2016, when the first IOM survey was conducted, to 42 per cent currently. However, employment levels remain quite low compared to the situation before displacement: approximately one third of IDPs who had a job before the conflict still cannot find a new one.

Other problematic issues are living conditions and payment for rent and utilities. Two thirds of IDPs live in rented housing, while one fifth are staying with relatives or with hosting families. Only one per cent in the government-controlled part of Ukraine lives in housing they own.

The survey shows great uncertainty about the future. A quarter of IDPs say they will never move back to their places of origin. Thirty-nine per cent would like to return when the conflict is over. Another 17 per cent said that they may consider returning in the future.

“Lack of support in finding relevant solutions for IDPs and returnees hinders their integration and creates dependencies on government and aid organizations,” said IOM Ukraine Chief of Mission, Manfred Profazi. “With the National Monitoring System, IOM aims to assist the Government in improving its knowledge about the situation and the needs of IDPs. We want to highlight emerging trends so that the Government can better develop evidence-based policies to address IDPs’ needs.”

At the joint presentation of the survey in Kyiv, Deputy Minister of Temporarily Occupied Territories and IDPs, Heorhii Tuka, stressed the importance of data collection and IOM’s expertise in shaping strategy and planning practical steps to support the well-being and integration of IDPs.

* IOM has been regularly conducting surveys about IDPs in Ukraine since March 2016. In this round, covering March–April 2017, 1,025 IDPs were interviewed face-to-face, and 3,312 IDPs registered by the Ministry of Social Policy of Ukraine across the country were interviewed by phone.