COVID-19 Behind Unprecedented Changes in the Number of Migrants Moving Across East and Horn of Africa: IOM Report 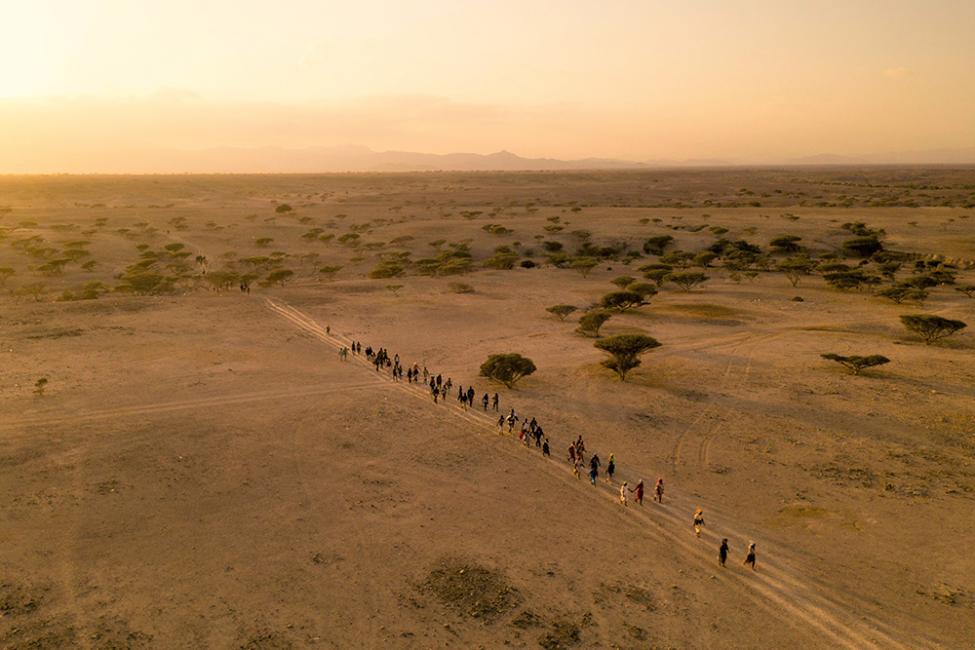 Migrants walking in the desert from Alat Ela to Fantahero in Djibouti. Photo: IOM 2020/Alexander BEE

Nairobi – At least 300,000 migrants across the East and Horn of Africa have been affected by COVID-19 in 2020, according to the International Organization for Migration (IOM)’s annual flagship report on migration trends and population movements in the region, released this week.

The report, A Region on the Move, highlights the dire consequences of the pandemic for vulnerable migrants, including Internally Displaced Persons (IDPs), refugees, asylum-seekers, unaccompanied minors, and returning and stranded migrants. The widespread air, land, and sea border closures, and other movement restrictions put in place to curb the spread of COVID-19, have severely impacted more than 300,000 people who largely depend on informal employment and the ability to move across borders for work and their survival.

Thousands of migrants, mostly Ethiopian, are stranded in Djibouti, Somalia and Yemen, unable to continue their journey to reach Saudi Arabia via Yemen. According to the report, the number of crossings to Yemen from the Horn of Africa has dropped by an unprecedented 73 per cent compared to 2019, approximately 37,000 from 138,000.

The extremely harsh conditions faced by migrants, exacerbated by the pandemic, also resulted in high numbers of people returning spontaneously from Yemen to Djibouti and Somalia. IOM estimates at least 32,000 migrants remain stranded in Yemen.

Hundreds of thousands more across the East and Horn of Africa lack access to food, water, security and medical care. Personal Protective Equipment to guard against COVID-19 are in short supply, and currently there is no access to the COVID-19 vaccine.

The region continues to be home to many of the world’s protracted displacement contexts, economic crises, conflicts and climate shocks, including the worst desert locust infestation in decades and a new crisis in Ethiopia’s Tigray region. Combined with the impact of COVID-19, these factors contributed to a rise in the number of IDPs in the East and Horn of Africa, reaching 6.5 million in December 2020 compared to 6.3 million in 2019.

The IOM report concludes that while causes of migration in the East and Horn of Africa – namely poverty, conflict and environmental events – persist, the economic drivers have been further exacerbated by the pandemic. This is supported by a  recent study by the United Nations Development Programme (UNDP) which finds that the long-term socio-economic impact of COVID-19 will widen the poverty gap between countries as an estimated 41 million people in low and medium development countries could be pushed into poverty by 2030, with the worst affected living in Africa.

At the same time, migration has become even riskier as smugglers try to circumvent COVID-19 movement restrictions and maximize profits over migrants that undertake various journeys in the region. Unpredictable and prolonged movement restrictions may push more migrants towards irregular channels of migration and increasingly risky smuggling routes, according to the new findings.

“Moving forward, we need to advance real alternatives to irregular migration and promote sustainable reintegration for migrants returning home,” said Mohammed Abdiker, Regional Director, IOM Regional Office for East and Horn of Africa. “We also need to see improved efforts to curb transnational organized crime regionally and internationally, that is responsible for so much of the smuggling of migrants and trafficking of persons in the region. Without this, the efforts of Member States to control migration will continue to be undermined and migrants will continue to suffer.”

The report was published by the Regional Data Hub (RDH) for the East and Horn of Africa, which aims to support evidence-based, strategic and policy-level discussion on migration through a combination of initiatives. Recent publications from the RDH can be accessed here.