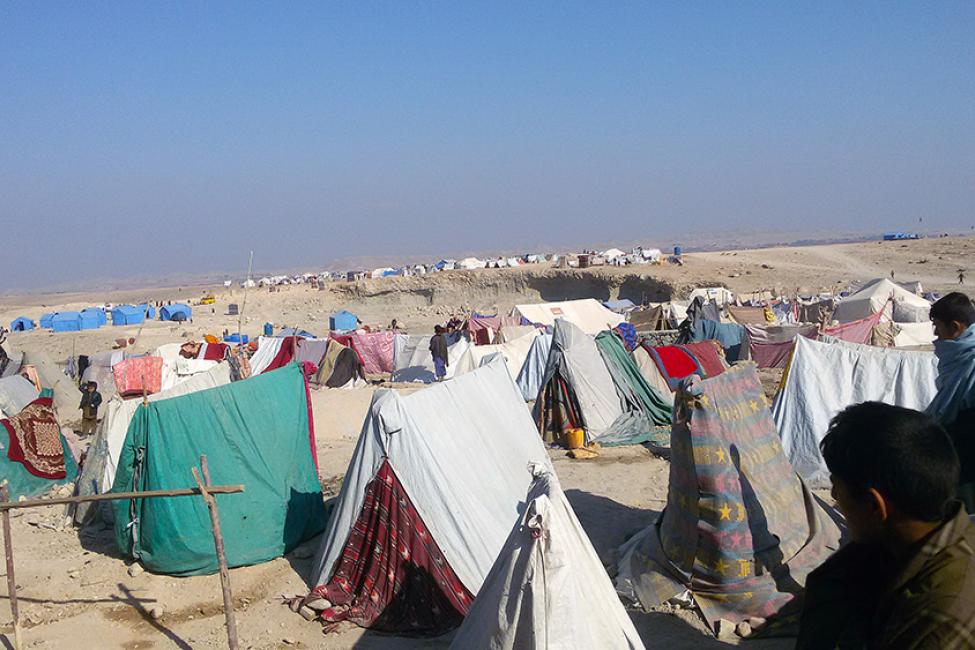 Kabul – One in six people is either a returnee or an internally displaced person (IDP) in the 15 Afghan provinces of Baghlan, Balkh, Farah, Herat, Kabul, Kandahar, Khost, Kunar, Kunduz, Laghman, Logar, Nangarhar, Nimroz, Paktya, and Takhar, according to the third round of IOM’s Afghanistan’s Displacement Tracking Matrix (DTM) Baseline Mobility Assessment.

In the 15 provinces assessed, which are believed to host the nation’s highest levels of returnee and displaced populations, a total of 3,549,168 individuals either returned from abroad or were internally displaced during the six years between January 2012 and December 2017. This represents roughly 18 per cent of the total base population of 16,699,381 in these provinces.

The DTM tracks mobility, determines the numbers and locations of forcibly displaced people and provides basic demographic information. It aims to explain the reasons behind their displacement and their migration history, as well as their vulnerabilities and priority needs.

The main objective of the DTM in Afghanistan is to supply the Government of Afghanistan and humanitarian partners with comprehensive data, enabling them to provide timely, targeted, and cost-effective assistance to conflict and displacement affected populations.

According to the survey, the returnees from abroad included 1,355,488 people from Pakistan and 398,521 from Iran. Another 67,002 Afghans returned from non-neighbouring countries. This includes 38,620 people who returned from Europe and Turkey.

With 499,194 individuals returning between 2012 and 2017, Nangarhar, a province bordering Pakistan, hosts the highest number of returnees, receiving over 25 per cent of all returnees recorded in the 15 assessed provinces.

The survey also identified a total of 1,728,157 IDPs currently living in host communities throughout the assessed provinces. The majority of IDPs – 86 per cent (1,481,923) – had been displaced by conflict, while the remaining 14 per cent (246,234) had been forced to leave their homes due to natural disasters, such as floods, avalanches and earthquakes.

There is also a strong trend toward urbanization among Afghan returnees and IDPs in search of better security, essential services and job opportunities. Some 48 per cent (1,718,202) of returnees and IDPs in the 15 assessed provinces are living in urban districts. IDPs are more likely to flee to urban areas – 55 per cent of IDPs (953,146) relocated to urban districts, whereas 42 per cent of returnees (765,056) chose urban environments.

“Often, particularly in urban environments, IDPs and returnees settle in so-called ‘informal settlements’ near economic centres where the income earners of the family try to find daily labour. The conditions in these settlements are dire, with extremely low standards of hygiene and limited access to water,” said IOM Afghanistan Chief of Mission Laurence Hart.

“Given that the past winter brought very little snow and rain, we may well face a drought this summer. In this event, it isn’t hard to imagine that those who will be most adversely affected are those who are already the most vulnerable: the returnees and IDPs. They often can’t afford to settle in places that have access to basic necessities, such as water, but rather settle in marginal areas, because they have nowhere else to go,” he added.

Following a first round of data collection conducted January – March 2017 in the three eastern provinces of Nangarhar, Laghman, and Kunar, and a second round covering nine provinces with the addition of Kabul, Balkh, Kunduz, Takhar, Baghlan and Paktya provinces, this current DTM survey has expanded to include Farah, Herat, Kandahar, Khost, Logar and Nimroz.

IOM’s DTM will continue to survey additional provinces where necessary to reflect and respond to the evolving needs of the displaced Afghan population. The DTM was launched in response to dramatic rises in returns from neighbouring countries, as well as increasing internal displacement. Between January 2016 and December 2017 at least 1,215,211 Afghans returned to Afghanistan from Iran and Pakistan, and over 1,286,608 were internally displaced by conflict.

Speaking at the launch of the report, Minister of Refugees and Repatriation Seyed Hussein Alemi Balkhi said: “This research shows that over the past six years, one in six people is either a returnee or an internally displaced person (IDP) in these 15 provinces. It is therefore necessary that migration and displacement should be considered as a top priority by the National Unity Government of Afghanistan.”