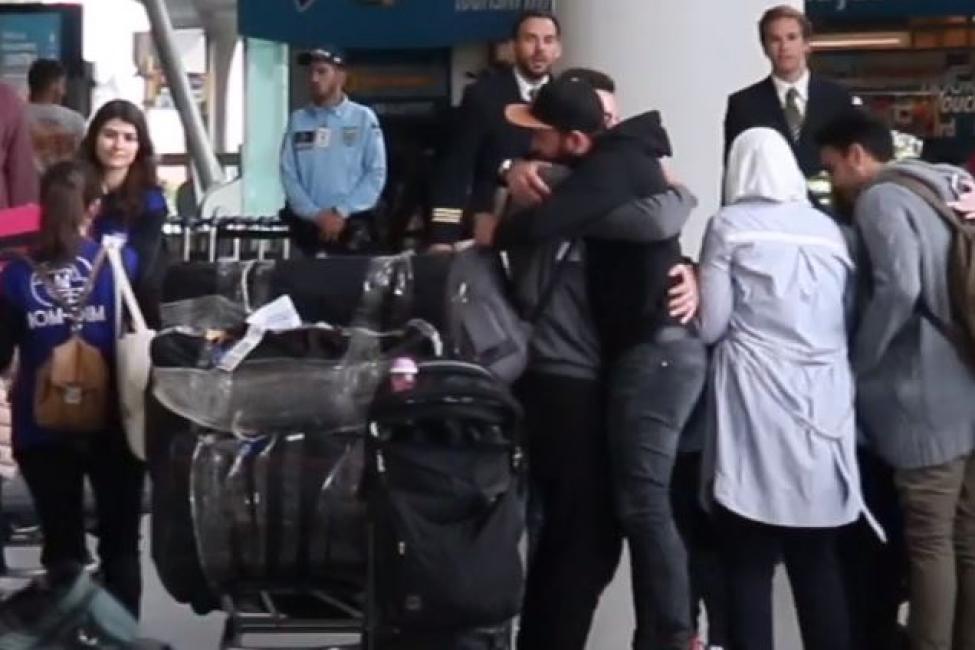 Lisbon – Thirteen refugees arrived safely in Lisbon on Wednesday to an emotional welcome from waiting family members, after leaving Turkey as part of Portugal's 2018-2019 refugee resettlement programme, facilitated by the International Organization for Migration (IOM) and the UN Refugee Agency (UNHCR).

“We’re very pleased to see the first resettlement of refugees from Turkey to Portugal this week and the strong collaboration between IOM, the government of Portugal and UNHCR," said IOM Director General António Vitorino.  "We remain committed to ensuring the resettlement process is conducted in a safe and dignified manner and wish this latest group success building their new lives in Portugal.”

The new arrivals, the first to be resettled through the programme, included three families from Syria and one individual from Iraq. One family is from Damascus and the others are from the countryside near Aleppo.

In Istanbul, the refugees, including six children, told IOM that they were excited to join their families and start a new life where, as one couple said, “My child will live in a country where there are human rights, freedoms, democracy, law and a future.”

“Here in Turkey, they call us ‘refugees’ and this identity follows us all the time wherever we go… I don’t want my son to be a refugee or to be called ‘refugee’,” said another prior to boarding the flight to Portugal.

In Lisbon, IOM staff and joyous family members welcomed the refugees at the airport together with the Immigration and Borders Service (SEF). IOM accompanied the new arrivals through immigration and arrival procedures that were conducted by the SEF and the High Commissioner for Migration (ACM). After leaving the airport, they were accompanied by their hosting institutions to accommodations in Braga and Lisbon.

At the start of the process, IOM is responsible for the preparation and implementation of selection missions. It then conducts full health assessment and pre-embarkation medical screenings to assess fitness to travel before departure and carries out three-day pre-departure orientation sessions to help ease their entry into Portugal. This is followed by airport assistance at departure and arrival.

At the same time, IOM conducts information sessions to help local actors prepare to receive refugees in the designated Portuguese municipalities. This is done by sharing the general profile of refugees, explaining the contexts in their countries of origin and first asylum, and by imparting knowledge on how to create empathy with people from diverse origins and with a refugee background.

Between 2016 and 2017, IOM also supported the resettlement to Portugal of 142 refugees from Turkey and 40 from Egypt.