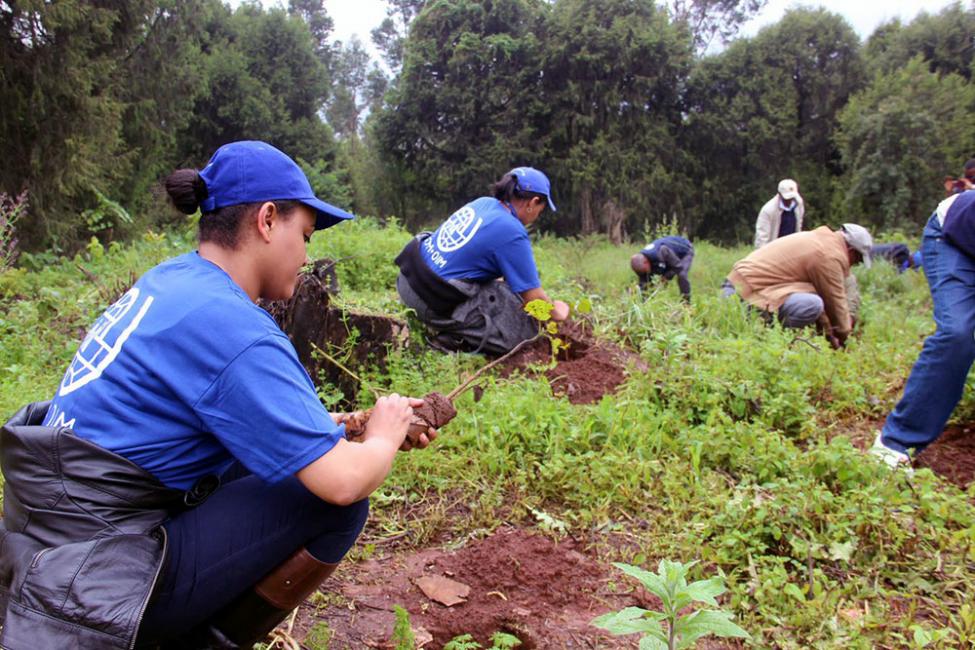 Entitled the “Green Legacy” project, this effort began with a goal of planting 200 million trees in one day – but enthusiasm was so great, that target was nearly doubled. Over 50 staff from IOM Ethiopia and other UN colleagues participated in the planting at Gullele Botanical Garden in Addis Ababa – one of the 1,000 designated planting sites of the ambitious initiative.

The record was previously held by India for planting over 50 million trees in one day in 2016.

These 353 million saplings are part of a wider 4 billion tree-planting initiative currently underway in Ethiopia. Over 2.9 billion trees already have been planted since the initiative began this past May. It is part of the country’s bid to fight against lost forest resources and help mitigate climate change, and contributes to Ethiopia’s green economy strategy.

"A reforested Ethiopia is a critical mitigation measure in the face of climate change; an increasingly key driver of mobility in this region. It therefore gives us great pleasure to take part in this reforestation initiative – IOM is proud to be part of the journey towards a greener Ethiopia,” said Maureen Achieng, IOM Ethiopia’s Chief of Mission and Representative to the AU, ECA and IGAD.

IOM welcomed the invitation to participate, with volunteers embracing the task of helping to plant saplings. To ensure sustainability of the initiative, the nationwide monitoring of seedlings has been affirmed by the Ethiopian Minister of Agriculture.

PM Abiy’s initiative links closely with key environmental targets as laid out in the Global Compact for Safe, Orderly and Regular Migration (GCM).

Green Legacy also links with IOM’s Migration, Environment and Climate Change (MECC) programming, as climate change is known to be one of the key driving factors of forced migration in Ethiopia – where people are forced to move as their old place of residence becomes inhospitable due to the changing climate and environment. In managing environmental migration, IOM promotes the minimization of forced and unmanaged migration as much as possible.

Established eight years ago, and with over 705 hectares of land, the Gullele Botanical garden is used for research, education, eco-tourism and conservation. Accordingly, the botanical garden hosts hundreds of what are believed to be Ethiopia’s 6,000+ plant species. With the addition of the saplings today, the garden will host many more – and an even greater variety of tree species.