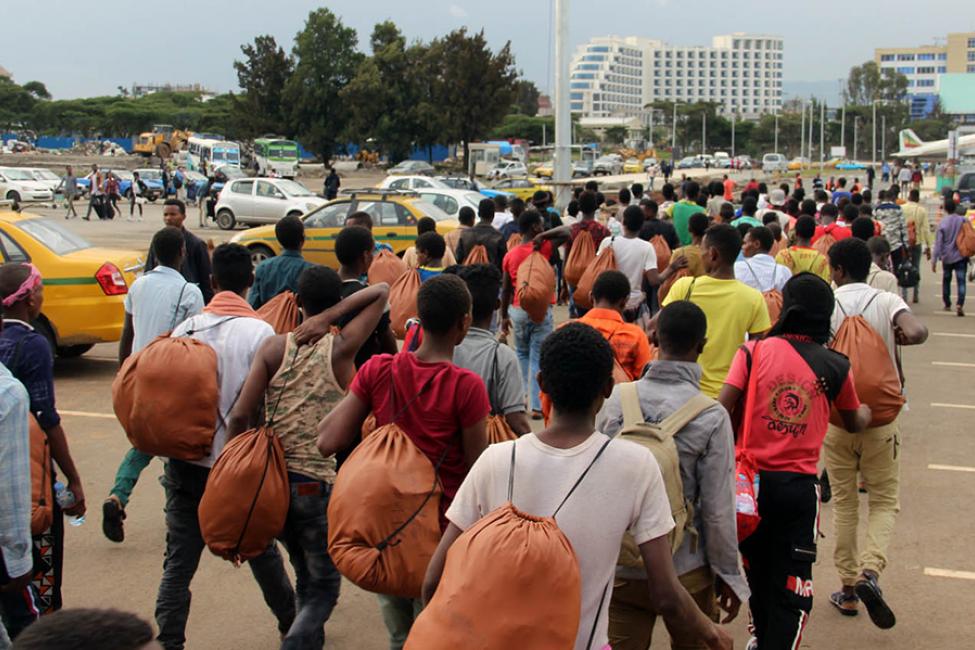 Addis Ababa — After being stranded in Yemen, a group of 280 Ethiopians returned home on Wednesday and Thursday (10-11 July) with the support of the International Organization for Migration (IOM). The returnees are among a large group of Ethiopian migrants from Yemen who have been taken home as part of an IOM Voluntary Humanitarian Return operation that began in May 2019.

IOM has safely returned 2,742 Ethiopians in the past 50 days with funding from the US State Department’s Bureau of Population, Refugees and Migration (PRM) through the Regional Migration Response Plan (RMRP).

Ahmed* is one of the returnees who have made it back. “When I left my home town of Wollo and decided to migrate to Saudi Arabia, I never thought I would face this much difficulty,” the 16-year-old said when describing his ordeal.

This teen said he witnessed torture and extortion, which remain strongly imprinted on his mind. Having left home without his parent’s permission, he went on to endure hardships that eventually made him change his mind about continuing with the journey.

“When the smugglers tell you of job opportunities and the life you could have there, it sounds like a dream, but that is not the reality,” he said, narrating how he left school in the 9th grade to earn a living.

“I did not know anything about the torture and extortion that was involved. In the end, my family had to take a loan from relatives abroad to pay 30,000 birr (USD 1,000) that was demanded for my release.”

Despite the hardships he faced, Ahmed is one of the fortunate ones to have come back in good health. Mohammed, 22, was not so fortunate as he came back to Ethiopia having lost one leg, after surviving an almost fatal gunshot wound in Yemen.

Holding on to crutches as he waited to be registered with other returnees at IOM’s Assisted Voluntary Return and Reintegration Transit Centre in Addis Ababa, he said he is now more concerned about returning home to be reunited with his family.

“I have already informed my family of my condition. They have told me that they would like me to come back. But with no money or a source of income, I am not sure how I will be able to make a living. If I could get help to open a small shop that I can run, that would help me,” he said.

“A prominent challenge we are facing is the limited funding for programmes to sustainably reintegrate returnees and tackle the root causes of irregular migration in hotspot areas,” explained Malambo Moonga, IOM Ethiopia Head of Migration Management.

“The limited employment and livelihood opportunities at home make irregular migration to the Middle East through war-torn Yemen a viable option for vulnerable youth in Ethiopia,” he said, highlighting one vicious challenge which has made curbing irregular migration from Ethiopia difficult.

IOM Ethiopia’s Migration Management Unit is using several methods to raise awareness on the dangers of irregular migration and available livelihood options at home through initiatives such as the Community Conversation programme. Yet, many young Ethiopians continue to be lured by smugglers who tell them how they can easily transform their lives by migrating to the Middle East.

“I was approached by the smuggler and was told that the situation in Yemen is easy. I had to find the hard way that this was not the case,” said Idris, a 23-year-old returnee.

Born and raised in Asela, this young man decided to leave for the Kingdom of Saudi Arabia for work. However, his journey was not so fruitful as he had to ask his wife to sell their cattle to pay for his trip, and now comes back home empty-handed.

Despite having only bruises to show for his journey, Idris, however, is glad to have returned home alive.

“I was severely beaten with a stick on my back and it is still aching. They were demanding hawala (ransom). I saw some migrants lose their eyes and three men die. So, I really feel I was fortunate to have made it back alive.”

*Names of the returnees have been changed to protect their privacy.