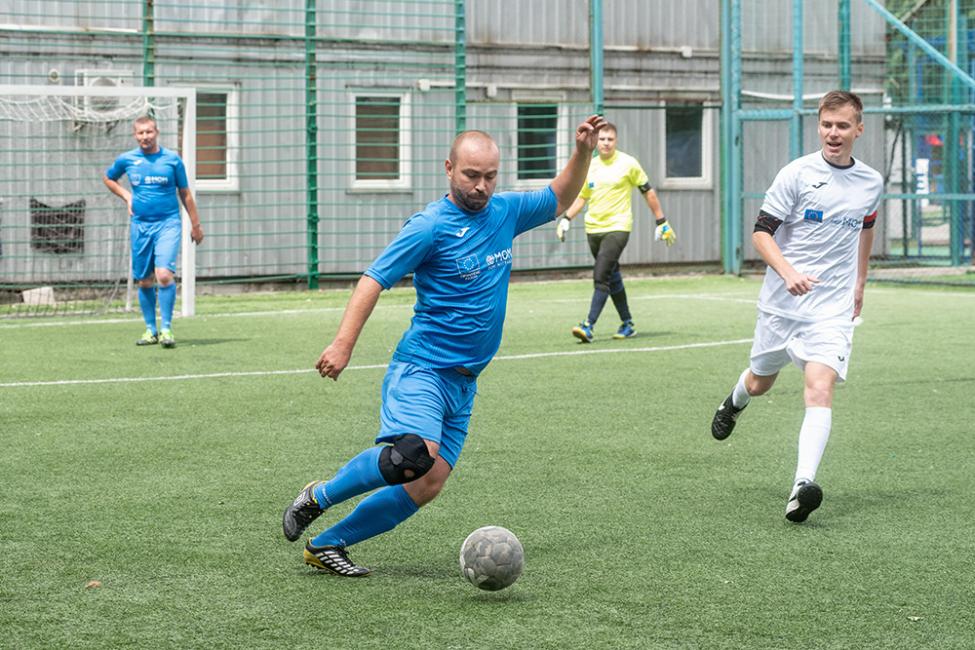 Kyiv – According to official data, there are about 370,000 veterans of the conflict in Ukraine, many of whom encounter significant challenges attempting to reintegrate into civilian life. As found by a World Bank study, about one-third of the veterans who had a job before mobilization are now unemployed, partially due to negative perceptions of veterans among employers, challenges with post-traumatic stress disorder, disabilities, and general mistrust.

“My whole mindset had changed, so after I was demobilized in early 2018 I decided not to get back to my old profession of a cash-in-transit guard and tried to find new goals in my life,” said Pavlo, a veteran of the conflict in eastern Ukraine, while warming up before an IOM-organized football match in Kyiv on 10 July.

Pavlo has been trying to tackle these challenges himself and support other veterans and their families: upon return he engaged in civic activism, and this year applied for the EU-funded vocational training grant from IOM. “With IOM’s support I’ve already started massage therapist courses. These skills will allow me to help other people, other veterans, and  have big plans for the development of my own business,” said Pavlo.

“Veterans have already shown by their actions that they are willing to defend their country. With support to overcome the challenges they face, this positive energy can be harnessed to bring good for all of society,” said Ambassador Hugues Mingarelli, Head of the EU Delegation to Ukraine. “That is why the EU believes that providing assistance to veterans and their families is such an important contribution to Ukraine’s safe and secure development,” he added, opening the IOM-organized football match.

The game, conducted in the format of a match for human rights, brought together 20 players – veterans, activists of non-governmental organizations and community initiative groups, as well as representatives of international organizations. Participants played without referees, chose the captains themselves, composed the first and second teams. The support of women, people with disabilities and less experienced players was encouraged.

“Over the past 25 years, the International Organization for Migration has become one of the global leaders in supporting former combatants and the communities to which they return with reintegration programmes implemented in over 30 countries. IOM’s experience shows that active involvement of veterans into community life is a guarantee of consolidation and stabilization of the society, and today we share this experience with Ukraine,” said Dr. Lore Szlapak, Officer in Charge at IOM Ukraine.

IOM’s engagement with veterans builds upon its crisis response programming. Since 2014, IOM has assisted over 400,000 internally displaced and conflict-affected persons with humanitarian, livelihoods and social cohesion support in response to the annexation of Crimea and military actions in the east of Ukraine.

The EU-funded veteran reintegration project has been implemented by IOM since January 2019 in three pilot regions – Kyiv, Dnipropetrovsk and Lviv. The project includes social cohesion activities, provision of qualified psychological assistance, as well as career development and self-employment support. About 400 veterans who pass the competitive selection will be provided with up to EUR 400 for vocational courses, re-qualification or advanced training. As many veterans will receive grants of up to EUR 1,000 for business development.

Watch a video about the initiative here.