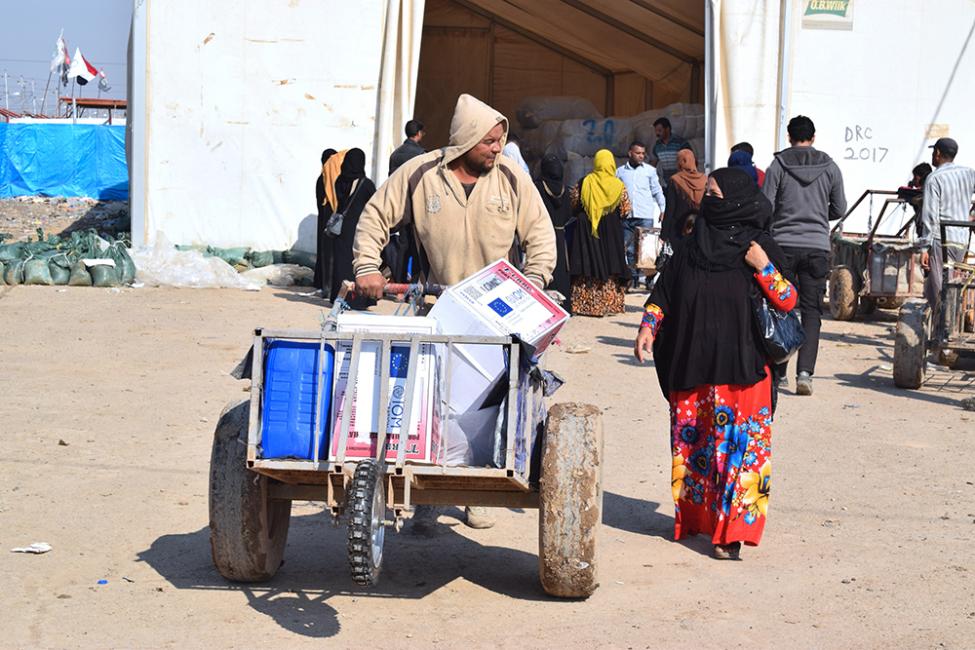 Erbil – Five years after the onset of the ISIL crisis and the subsequent massive internal displacement, over half a million Iraqis continue to live in camps.

The European Union (EU) has awarded an additional EUR 2 million to IOM in Iraq to make critical infrastructure improvements in camps for internally displaced persons. This brings the total EU humanitarian contribution IOM Iraq has received in 2019 to EUR 5 million.

With this additional allocation, in coordination with the Government of Iraq and local authorities, IOM will be able to improve the living conditions of camp residents. IOM will rehabilitate deteriorating road and drainage networks in three Jad’ah camps, near Mosul in Ninewa governorate.

The Jad’ah camps currently host over 8,600 households, around 35,000 individuals, the majority from the districts of Hatra, Mosul, Al-Ba’aj and Telafar in Ninewa. These families are among the most vulnerable in Iraq; return to their areas of origin is not feasible in the near future for a variety of reasons, including damage to their houses, continued insecurity, limited access to employment opportunities, and limited basic services in their hometowns.

“While many displaced families have been able to return, we cannot forget about those who remain in camps. Ensuring that those displaced by fighting have access to humanitarian assistance remains a priority for the EU in Iraq,” said Christos Stylianides, the European Commissioner for Humanitarian Aid and Crisis Management.

During the height of the 2014–2017 crisis, IOM and humanitarian partners in Iraq developed camps to house tens of thousands of families fleeing ISIL, often constructed quickly due to pressing emergency circumstances.  Infrastructure in those camps has since become worn and needs upgrades and repair.

“With our contribution we hope to improve the living conditions of Iraqis who are still in protracted displacement, and we encourage other partners in the humanitarian community to do the same. In 2019, we look forward to continuing to address these pressing needs in partnership with IOM,” Commissioner Stylianides added.

This humanitarian contribution by the EU will complement the previous allocation of EUR 3 million, received in March 2019, being used to conduct critical maintenance activities in camps across Iraq, to replace basic household items for camp populations and provide basic relief kits, including kitchen sets, blankets and mattresses.

“The conditions in many camps in Iraq have worsened over the last year due to natural wear-and-tear and limited investments. Camps have remained in service for longer than initially expected and now need upkeep and improvement,” said IOM Iraq Chief of Mission Gerard Waite.

“This additional allocation from the EU will enable IOM to provide much needed support in some of the most populous camps, which are housing displaced families who are among the most vulnerable, with no immediate or medium-term prospect of returning home.”

Return is especially difficult for vulnerable families, including those in a situation of protracted displacement, who after years of displacement have exhausted their resources and are not able to afford to rebuild their homes.

The EU, through its EU Civil Protection and Humanitarian Aid department, and IOM Iraq have been in a strategic partnership to provide camp management, camp maintenance, infrastructure upgrades and shelter and non-food items response in and out of camps in Iraq since 2014, with a total budget of over EUR 36 million, assisting altogether more than 700,000 direct and indirect beneficiaries.

Both organizations continue to play a leading role in advocating for continued support to families in protracted displacement while coordinating to find longer-term solutions for these internally displaced populations.

Across Iraq, more than 1.6 million Iraqis continue to be displaced following the conflict with ISIL. Of those who were displaced, more than 4.2 million have been able to return to their areas of origin, according to IOM Iraq’s Displacement Tracking Matrix.

For figures and analysis on displacement in Iraq please visit: http://iraqdtm.iom.int/