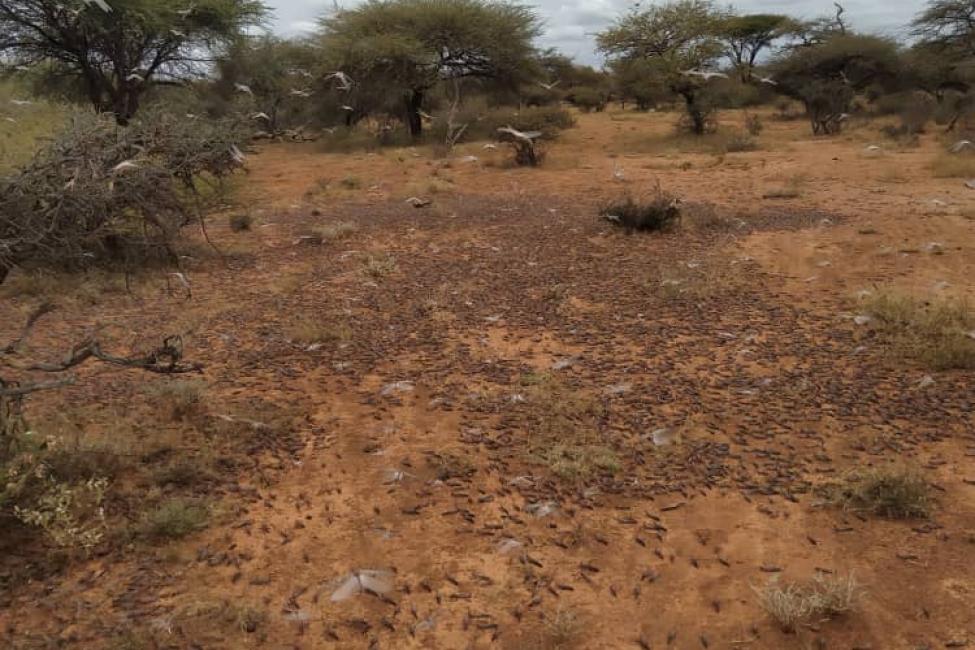 Swarms of desert locust in some regions of Ethiopia caused widespread damage to livelihood, livestock and even homes. Credits: IOM 2020

Addis Ababa – In Ethiopia, an infestation of desert locusts is inflicting untold damage to crops, leading to a deterioration of the food security situation and an additional threat to livelihoods.

This summer, IOM has positioned itself to assist thousands of people affected by a severe outbreak of desert locusts in some regions. Over the next four months, 7,500 households – or approximately 45,000 individuals – will receive cash grants to buy food and other essentials in the affected regions of Oromia and Somali. They need this aid for their very survival.

Described by the Food and Agriculture Organization (FAO) as “the most destructive migratory pest in the world,” desert locusts are currently destroying tens of thousands of hectares of crops, grazing land and forests in Ethiopia, Kenya, Somalia, Sudan, South Sudan and Yemen.

Ethiopia is now at the epicentre of these large swarms that arrived at the end of 2019 in an outbreak reported to be the worst in decades.

“Thick clouds of ravenous insects have invaded Borena in Oromia region, at the border with Kenya, where they are devouring large quantities of vegetation, crops, pasture and fodder, and causing widespread damage to the environment,” said Ester Ruiz De Azua, Emergency and Post-Crisis Coordinator for IOM Ethiopia. “They are threatening drinking points for livestock and even invading homes.”

The World Bank warns that, without broad scale control, conservative estimates for locust-related losses including for staple crops, livestock production and asset damages could reach USD 8.5 billion for countries in the wider East Africa region, Djibouti and Yemen.

Moreover, with the locusts spreading in cycles, a recent re-escalation means the most affected regions and zones of the country will remain under this menace until at least the end of this year.

This has worsened the situation for communities already affected by the impacts of the COVID-19 pandemic, insecurity and displacement due to communal violence and strained access to food, leaving the most vulnerable facing poverty and hunger.

As a result, some people have abandoned their homes and sought temporary refuge in other kebeles (wards) of the zone.

While response teams conduct locust-control operations, IOM – working with the government and the country’s Cash Working Group – has begun implementing a food security and livelihoods project that will extend multi-purpose cash grants to the most affected.

“In response to a call by the Federal Ministry of Agriculture (MOA) for immediate action to address the Desert Locust infestation in Ethiopia, IOM mobilized its teams to support the government's efforts to address the economic impact of the invasion for the most vulnerable population already dealing with the consequences of previous and ongoing natural disasters,”  explained Maureen Achieng, IOM Chief of Mission to Ethiopia and Representative to the African Union (AU) and United Nations Economic Commission for Africa (UNECA).

The multi-purpose cash grants to support livelihoods of most vulnerable locust-affected populations is funded by the European Union’s Civil Protection and Humanitarian Aid Operations Department (ECHO) through a EUR 2 million facility.

"The EU has been committed to support efforts to address the desert locust infestation not only in Ethiopia but also in the Horn of Africa,” says Yassine Gaba, the Head of Office of the EU Humanitarian Aid in Ethiopia. “We are confident that this support to IOM will address immediate needs of the most vulnerable, whose livelihoods have been adversely affected by the desert locusts.”

The cash grants will primarily address people’s immediate food needs, based on the food basket set by the government, while supporting water, sanitation and hygiene (WASH), education and shelter needs.

Amounting to ETB 1,500 (approximately USD 40) per household each month for over four months, the cash transfers are unconditional and will be handled through financial service providers such as the Ethiopian Postal Services (EPS) and Somali Microfinance Institution (SMFI).

The transfer value is based on a minimum expenditure basket (MEB) set by the Cash Working Group and by the government’s National Disaster Risk Management Commission (NDRMC). These values were determined after a rapid assessment conducted to monitor consumer market prices.

The next step before the start of cash disbursements: identifying deserving beneficiaries. There, government and community leaders will play an important part before distribution starts in coming weeks.

As part of the project, IOM will work with REACH/IMPACT Initiatives to establish a price monitoring system that will continuously track the supply and costs for basic household items in local markets.

The European Union is also supporting other IOM interventions in Ethiopia since April 2019, through a USD 10 million grant. These include provision of shelter and non-food items to vulnerable displaced people, including those displaced by floods in 2019, site management support, and construction of water, sanitation and hygiene facilities.

It has also supported development of IOM Ethiopia’s Displacement Tracking Matrix (DTM) products that are distributed to over 60 organizations, as well as the registration, profiling and provision of onward transportation assistance to thousands of returnee migrants from the Kingdom of Saudi Arabia.