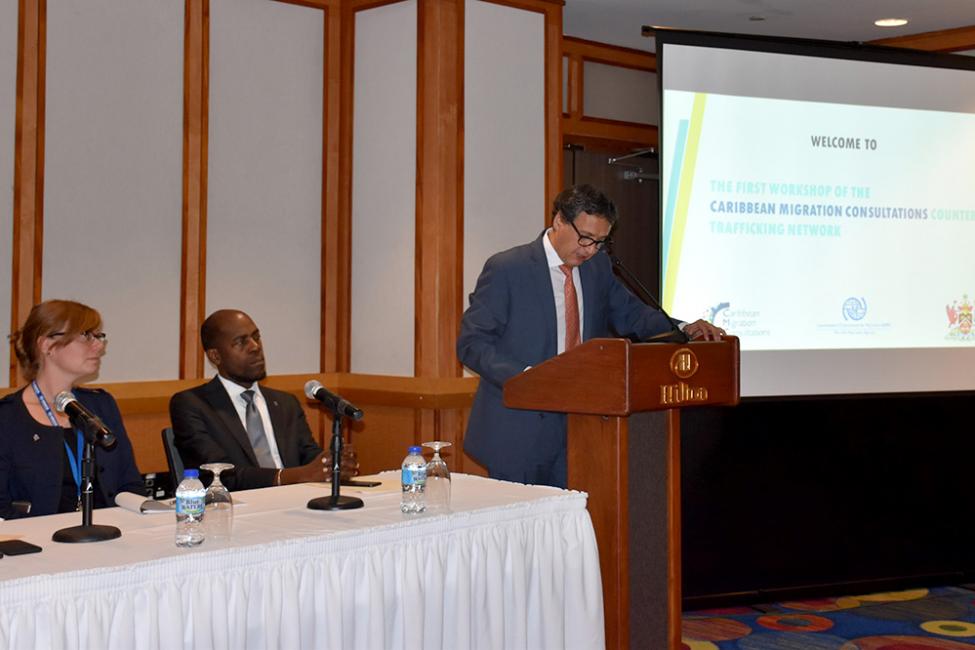 Port of Spain – This week witnessed the inaugural gathering of a regional counter-trafficking network hosted by the government of Trinidad and Tobago and supported by the US State Department Bureau of Population, Refugees and Migration (PRM) and IOM, the UN Migration Agency.

Thirty experts and government officials from 15 Caribbean states and territories met in Trinidad and Tobago to formalize the first network in this region focused on the fight against human trafficking. The event, which ends today (27/04), was called to improve the exchange of information and regional cooperation to prevent and respond to this crime.

The Regional Counter-trafficking Network is one of the first developments of the Caribbean Migration Consultations (CMC), a consultative forum of more than 20 governments and 10 international organizations that exchange information and best practices on a wide range of migration issues.

One of the thematic areas addressed by the CMC is human trafficking, a phenomenon that has been identified as a high priority in the region. For this reason, IOM convened those responsible for combating human trafficking in Caribbean countries and territories, including multi-sectoral working groups, committees and task forces, among others, as well as experts and key partners.

Like all regions of the world, the Caribbean is affected by human trafficking, for purposes of labour and sexual exploitation. There are no systematic figures that show the situation in the region (a gap of interest for the network), but globally it is estimated that 40.3 million people are in a situation of modern slavery, according to Alliance 8.7, a United Nations effort that aims to support world leaders in their efforts to achieve Target 8.7 of the 2030 Agenda.

Considerable advances have been made in the Caribbean in the fight against trafficking, including development of specialized police units and assistance protocols that involve multiple sectors, best practices, and minimum standards. However, human trafficking remains one of the most complex and damaging crimes in the region.

"Human trafficking can occur in a country, but many of the criminal networks of traffickers cross borders, making cooperation between countries fundamental,” said Marcelo Pisani, IOM Regional Director for Central America, North America and the Caribbean. “Actions to align investigation and sanction efforts, as well as those to assist victims of trafficking, require, now more than ever, more regional cooperation initiatives."

The two-day event included an analysis of the current state of human trafficking in the Caribbean, in addition to current responses from countries and territories for the identification and assistance of victims. Techniques for investigating and prosecuting human traffickers also were analysed.

Representatives shared information on their current actions and best practices, as well as gaps and challenges in cooperation at the regional level. They also defined actions that will promote cooperation in the fight against trafficking in the future, through the identification of the priorities of the Counter-Trafficking Network of the CMC and discussions on how the Network could cooperate virtually through the Caribbean Platform for Migration Governance (CPMG).