GMDAC: Over 6,600 Migration Deaths Recorded in Africa Since 2013 ‘Just the Tip of the Iceberg’ 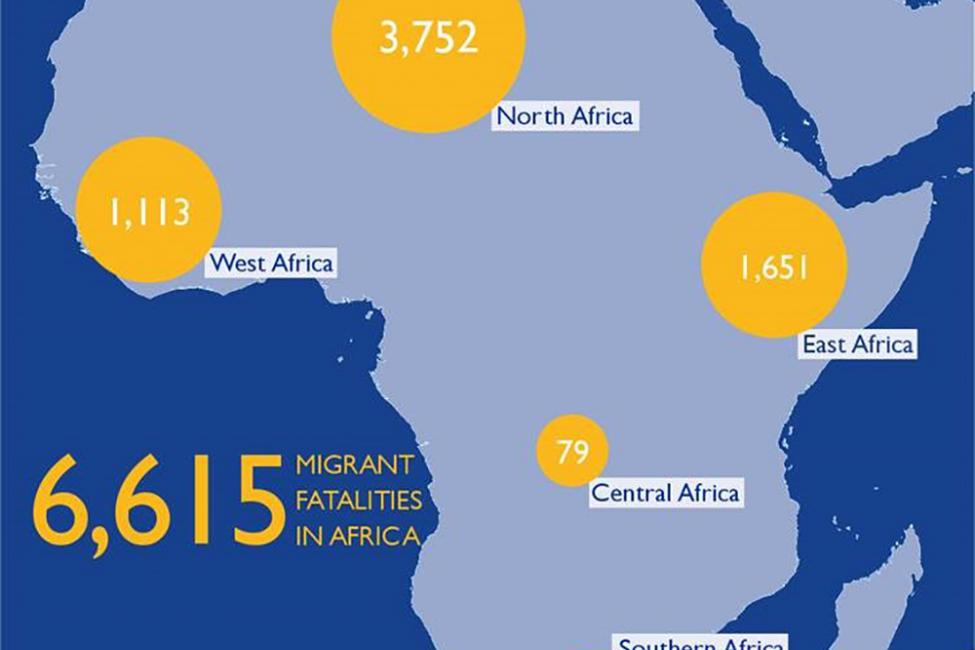 An estimated 6,615 deaths during migration reported in Africa in the last five years. Photo: IOM

Berlin – Today (18/12) IOM’s Missing Migrants Project (MMP) will publish records from hundreds of eyewitness reports of deaths during migration in Africa, bringing the total number of deaths recorded on the continent to 1,386 this year.

MMP researchers explain that with these latest data, the total number of deaths of migrants confirmed on the continent is an estimated 6,615 in just the last five years.

The new records added today to 2018’s total – amounting to information on 1,014 previously unknown fatalities – are based on surveys conducted by the Mixed Migration Centre’s Monitoring Mechanism Initiative (4Mi). However, 4Mi’s surveys represent only a small fraction of the overall number of people on the move in Africa – meaning that these thousands of deaths are likely a substantial undercount of the true number.

In the absence of official, systematic and intraregional information sources on migration flows in Africa, surveys such as those conducted by 4mi reveal important information about the experiences – including significant risks – that people face on routes within the continent.

Though much African migration is regular and takes places within Africa itself, the newly published evidence underscores the monumental risks that migrants can face on their journeys, and just how little we know about them.

“When people don’t have access to legal migration routes and few reliable records exist, would-be migrants face vulnerability at the hands of human traffickers and smugglers,” said Dr. Frank Laczko, Director of IOM’s Data Analysis Centre in Berlin, where the Missing Migrants Project is based.

Many of the deaths recorded by the Missing Migrants Project are concentrated on routes used by smugglers. Most migration deaths reported within Africa appear to have occurred while migrants are en route to Libya: deaths recorded since 2014 are predominately in the Sahara Desert, northern Niger, southern Libya, and northern Sudan.

The main causes of death recorded indicate that many migrant deaths in Africa are preventable. Starvation, dehydration, physical abuse, sickness and lack of access to medicines are causes of death frequently cited by the migrants who reported deaths on routes within Africa. Involvement with human smugglers and traffickers in human beings can put people in extremely risky situations in which they have little agency to protect themselves, let alone fellow travellers they see being abused.

It is nearly impossible to verify the identities of those who reportedly died or where they intended to migrate.  Missing Migrants Project data identify the deaths of 1,275 men, 534 women and 336 children and teens – which is less than one third of the 6,615 fatalities recorded in Africa in the last five years.  Beyond the age and gender of this small proportion of the dataset, little more is known about the deceased.

Multiple interviewees reported witnessing the deaths of their fellow migrants on several occasions. Very little support is provided to migrants who have witnessed such traumatic events.

“People who witness fellow migrants die often have no way to report what they have seen, not to mention experiencing significant psychosocial stress,” said Dr. Laczko.  “When you consider that survey results may be the only evidence of these deaths, it is clear that these records represent the tip of the iceberg and that the human loss of life is of unknown proportions.”

While survey data represent one of the few sources of information on deaths during migration in Africa, they are largely unverifiable. However (as IOM recommends in its most recent volume of the  Fatal Journeys report series), in areas where few institutions collect data on missing migrants – or where access is an issue – surveys can provide crucial data on deaths and the risks people face during migration.

The Missing Migrants Project records migrant deaths that take place during migration journeys, which means that the deaths of people in detention centres, those who are displaced in their own country or whose deaths may be connected to their irregular status in other countries, are not included.  Reports of missing people are also not included. To avoid double counting the same incidents, IOM staff do not record reports that may be duplicates.

However, the lack of official and unofficial reports on deaths during migration and the relatively small number of migrants surveyed in Africa indicate that MMP data in Africa represent a minimum estimate of the true number of migrant deaths.