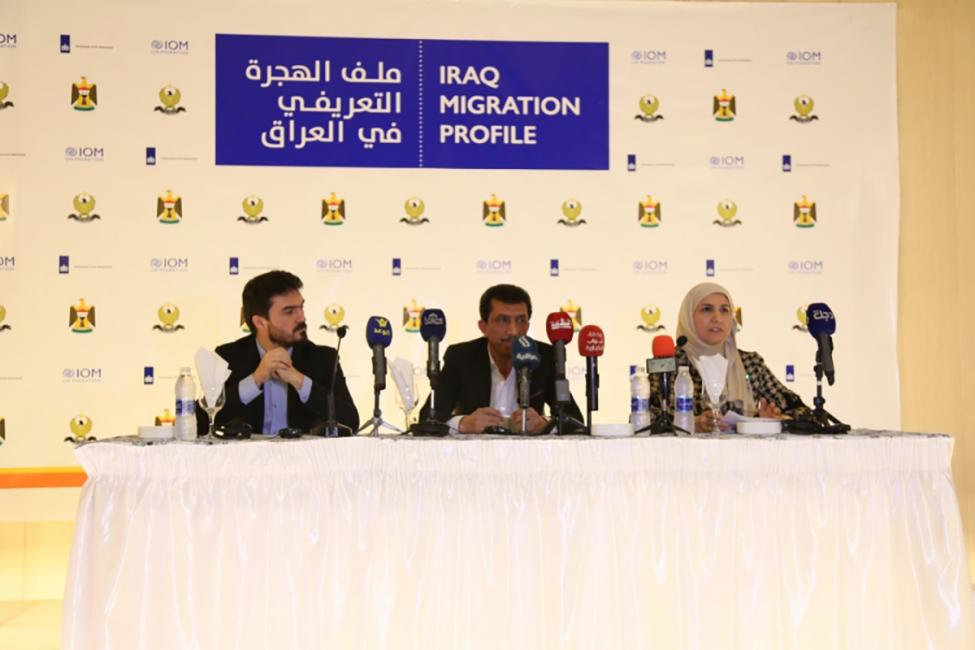 Baghdad – Iraq, in contrast to nearby Middle East states like Jordan and Lebanon, hosts the lowest number of immigrants in proportion to its population. Nonetheless, the country’s foreign population is growing, more than tripling between 1990 and 2017, largely due to the influx of refugees from Syria.

Migration in northern Iraq is largely driven by conflict, while migration in southern Iraq is more often linked to livelihood factors such as the loss of arable land and water scarcity.

These, and other findings, come from the first Migration Profile for Iraq, which was unveiled this week (19/12) during a press briefing at Baghdad’s Babylon Hotel. The project was assisted by the International Organization for Migration (IOM).

The Migration Profile presents facts and figures about migration; it is the first-ever statistical overview of migration in Iraq and will help establish an evidence base that will influence national migration policies and strategies including a National Migration Strategy.

“The Migration Profile is the result of the first-year meetings between Iraqi ministries and IOM. It will influence both near and far-reaching migration policies,” said Ahmed Rahim, Director of the Department of Foreign Immigration at the Government of Iraq's Ministry of Displacement and Migration.

The profile shows that patterns of out migration have shifted significantly since 2003. During the period between the Gulf War and 2003, the primary destination for Iraqis migrating abroad was Iran; after 2003, Jordan and Syria emerged as primary destinations. Europe became a major destination after 2014, with Sweden, Germany and the UK standing out as significant destination countries.

In recent years, internal displacement has been a prime concern. Displacement driven by the war against the so-called Islamic State in Iraq and the Levant (ISIL) presents a peculiar case, in that it has provoked more internal displacement than international migration – in part because previous countries of refuge were in crisis themselves (Syria) or inaccessible (Jordan). Emigration as a result of ISIL’s presence has reached Turkey, Europe and Western countries, rather than former asylum countries (Iran, Jordan, Syria).

Other findings of the profile relate to the Iraqi diaspora; trends of irregular migration; Iraqi students studying abroad; and more. IOM has carried out similar studies in over 80 countries around the world using a standard approach to the research. The profile uses existing knowledge and literature; interviews with government and international organizations; publicly available quantitative data; and non-public data shared both by Iraqi authorities and international organizations.

“The Migration Profile demonstrates the Government of Iraq’s commitment to harnessing evidence-based and whole-of-Government approaches towards strong migration governance,” said IOM Iraq Chief of Mission Gerard Waite. “The migration data it contains can be leveraged in years to come to mainstream migration into policies and strategies.”

The Migration Profile was developed through a capacity-building process overseen by a Technical Working Group established by the Government of Iraq's Ministries of Migration and Displacement; Interior; Foreign Affairs; Justice; Labour and Social Affairs; and Planning; as well as the Central Statistics Office alongside IOM.