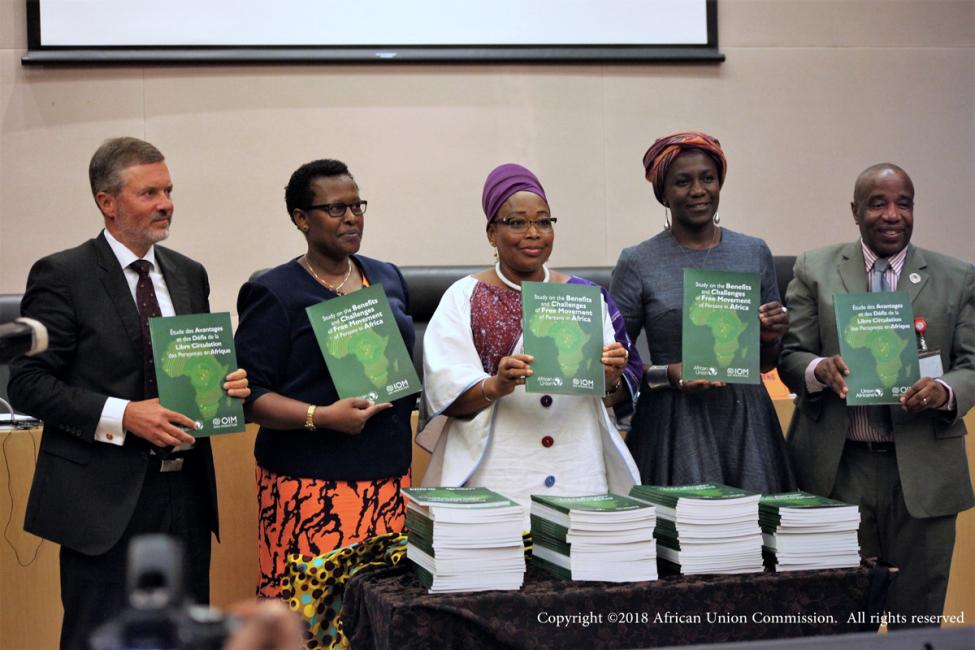 IOM and the African Union Commission launch report on the Benefits and Challenges of Free Movement of Persons in Africa. Photo: AUC

Addis Ababa – IOM, the UN Migration Agency, and the African Union Commission (AUC) have launched a study on the Benefits and Challenges of Free Movement of Persons in Africa.

The study – commissioned by the AUC and IOM to further inform deliberations on and work towards continental integration – explores the argument for free movement, while also highlighting potential pitfalls, and enables for a well-governed continental free movement regime.

One key conclusion is that the benefits of free movement far outweigh any challenges that may rise; moreover, solutions to those challenges do not lie in slowing the march towards freer movement of African citizens on the continent, but in AU Member States individually and collectively working to address the key challenges, the study has noted.

Ambassador Hope Tumukunde Gasatura, in her capacity as chair of the Specialized Technical Committee of the African Union on Migration, Refugees and IDPs and Ambassador of Rwanda to Ethiopia and Djibouti, underlined that Rwanda’s experience following its decision to ensure visas are obtainable upon arrival for all African nationals has occasioned many benefits, including an increase in tourism and a more favourable trade balance for Rwanda. None of the often-touted security concerns linked to migration have played out in the case of Rwanda.

The Commissioner for Political Affairs for the African Union Commission, Ambassador Minata Samate Cessouma, noted that free movement of persons will be critical to achieving the socio-economic and political integration and prosperity envisioned in Agenda 2063 – The Africa We Want. She noted the progress made thus far in facilitating free movement of persons – so far, 32 African countries have signed the Protocol to the Treaty Establishing the African Economic Community Relating to Free Movement of Persons, Right of Residence and Right of Establishment, and some several countries are reflecting on how to commence implementation of visa upon arrival policies. However, she underlined the urgency in moving towards ratification and implementation of the protocol, noting that the fifteen ratifications are required for the protocol to come into force. Thus far, only Rwanda has ratified the protocol.

In her overview of the study, Maureen Achieng, IOM Ethiopia Chief of Mission and Representative to the AU, IGAD and UNECA, discussed the benefits of free movement as advanced in the study. She explained that free movement of persons will be key to reaching the target of 50 per cent intra-African trade by 2045 as envisioned in Agenda 2063. She went on to underline the key recommendations advanced in the study as proposed responses to the challenges to implementing a free movement regime, and potential threats it could bring in. The study notes that these include the need to improve national civil registration systems and enhanced capacities of border management and law enforcement capabilities of Member States.

Dr. Khabele Matlosa, Director of the AUC/Department of Political Affairs applauded the study, adding that “It is critical for us to unveil the findings of the study as they will help Member States to approach the issue of free movement from an informed stand point.” He appreciated the fact that the study takes account of current efforts of the African Union and its respective Regional Economic Communities to facilitate free movement of persons in Africa.

The study, and indeed the support that IOM has continued to provide to AU deliberations and work towards continental free movement, has been made possible through financial support from the Government of Norway. In his message of support, Andreas Gaarder, Norway’s Ambassador to Ethiopia, Djibouti, the African Union and IGAD declared that “Inter-Africa trade cannot happen when businesses, ideas, and people cannot move around the continent. Migration and labour mobility present an opportunity for growth and economic development.” Ambassador Gaarder concluded by reassuring the AUC and its partners of Norway’s continued support with a view to facilitating safe, orderly and regular migration.