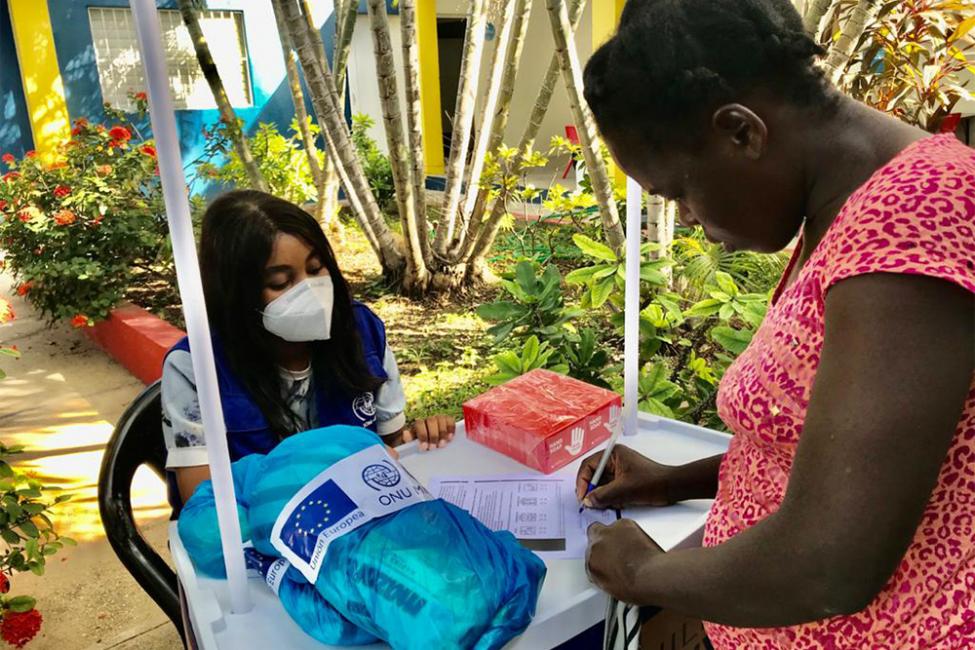 Hand soap and COVID-19 prevention information have been distributed along with food kits in the border provinces of the Dominican Republic. Photo: IOM/Lenny Mendez 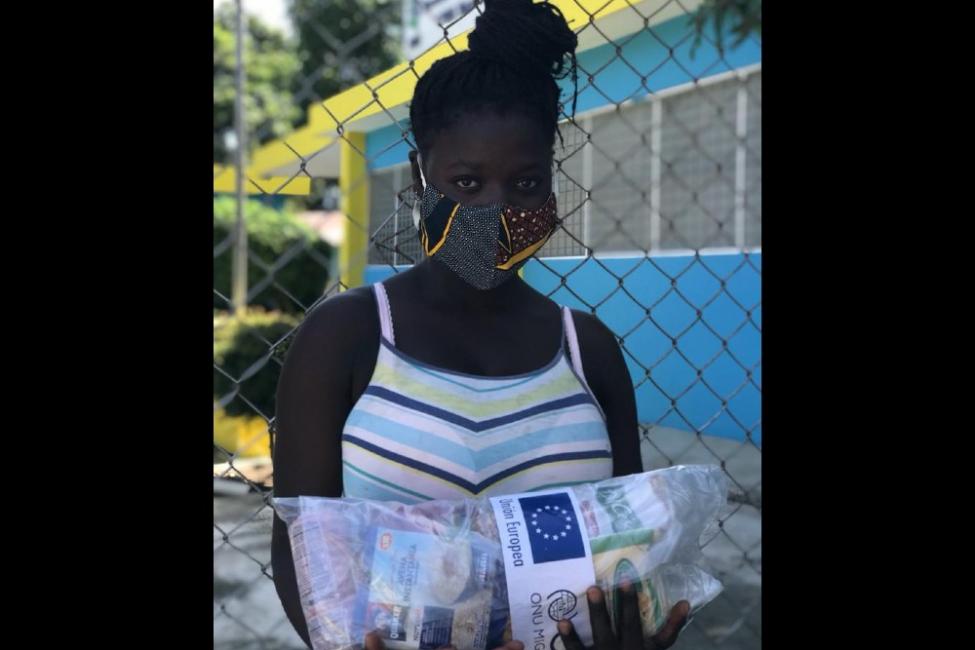 Pedernales – The International Organization for Migration (IOM) is distributing more than 12,000 food kits to migrant and Dominican families in several provinces affected by the economic consequences of border closures due to COVID-19, part of a worldwide IOM effort to aid communities stranded or impoverished in border zones due to sharp declines in commerce and other cross-border activities.

Border restrictions have been in place here since March to control COVID-19’s spread between the Dominican Republic and Haiti. The closure of the four official border crossings along the Haitian-Dominican frontier over these past seven months has affected the nearby populations. According to information from the Ministry of Economic, Planning, and Development of the Dominican Republic (MEPYD), around 90 per cent of formal trade with Haiti flows through these customs posts, which average 227,000 entries each year.

During September and October, some 20,000 people benefited from the first 4,000 food kits delivered in the border provinces.

Conditions in the Dominican city of Pedernales illuminate the COVID-related setbacks now impacting millions of people in the Americas, many of them migrants. "The COVID emergency has really affected our community because both transportation and food production has decreased,” explained Rafael Pérez Jean, an evangelical pastor and director of The Casa de Luz Foundation in Pedernales. “The way we live in the border area also has changed. As the border is practically closed, products are not allowed to transit through the frontier as before, nor are visas available."

The Casa de Luz Foundation is one of the civil organizations collaborating with IOM to distribute food in the five border provinces of the Dominican Republic: Pedernales, Independencia, Elías Piña, Dajabón, and Montecristi.

Pastor Pérez Jean has served as a bridge between IOM and the communities that benefited from these food kits. He recalled moments of uncertainty experienced in his town during the pandemic, explaining "People do not have access to food in sufficient quantities, and thanks to the aid that IOM has been providing these days, many people have received food at home. That helps them to have a livelihood."

Cristian Nuevo Poché agreed that COVID-19 changed lives in Elías Piña province, where he has been a community leader and schoolteacher for over 20 years. He explained that the pandemic exacerbated an already difficult economic situation in his area.  "Many of these families depended on the informal market trade. Now the market activities are almost nil, so many have had to migrate to work for private households in Santo Domingo," Nuevo Poché said. "Food rations helped alleviate prevailing needs in the Pinzón community."

Miguel Román, coordinator of IOM in the border region, explained that in November 8,000 kits will be distributed nationwide, of which 3,500 are already being delivered in the border provinces of Pedernales, Barahona, Bahoruco, Independencia (Jimaní), Elías Piña, Dajabón and Montecristi.

Román emphasized that the kits being distributed are headed to those considered among the most vulnerable in the population, such as Haitian and Venezuelan migrants, as well as Dominican families with limited economic resources. The new distributions will include hand soap donated by the Colgate-Palmolive corporation to UNDP in the Dominican Republic, masks made by an IOM-supported migrant venture, and information about preventing COVID-19.

Assistance to the families most affected by the COVID-19 pandemic in the Dominican Republic is possible thanks to the contributions of the European Union and the US State Department's Bureau of Population, Refugees, and Migration.

In Argentina, partners included the Human Rights Secretary´s Office of Argentina and provincial Human Rights Offices, as well as the Argentine Red Cross. Besides EU aid, funding was also provided by the Bureau of Population, Refugees, and Migration of the U.S. State Department (PRM).

In Egypt, IOM has distributed thousands of food and non-food items and financial assistance to 2,675 persons in Alexandria, Cairo, Hurghada and Al-Fayoum. IOM estimates that there are 600,000 vulnerable migrants in Egypt who encounter a wide range of challenges, including inadequate access to food, health, and education services in addition to limited access to socio-economic opportunities.