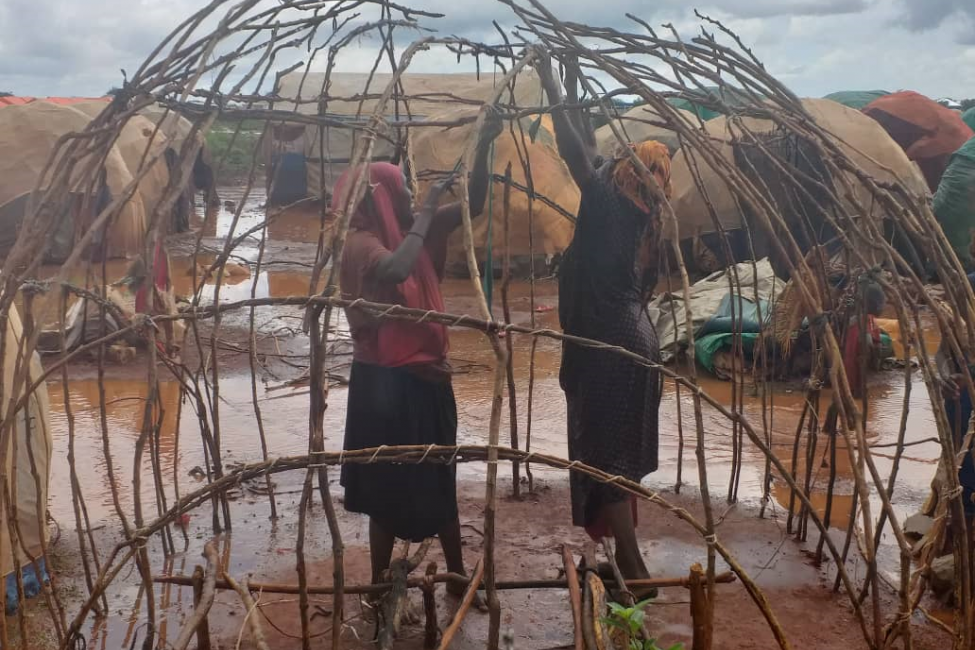 Mogadishu - The International Organization for Migration is appealing for urgent humanitarian support to thousands of flood-affected people in Somalia. Flash floods following heavy rains in parts of Somalia have displaced thousands of vulnerable people.  In some of the worst hit areas, farms, infrastructure and roads have been destroyed, and livelihoods disrupted. An estimated 182,000 people have so far been displaced, according to humanitarian partners.

The Shabelle and Juba rivers in Hirshabelle Sate and South West State, respectively, have risen and inundated many surrounding towns. With another tropical storm forecast, the possibility of further damage remains a concern.

With funding from partners such as UN CERF, ECHO and the governments of Germany, Japan and the United Kingdom, IOM has ramped up response in the affected areas. But needs far outweigh available resources.

Using prepositioned emergency contingency stock, IOM was able to respond by delivering 3,200 emergency NFI kits to partners in Beledweyne, where the impact of the floods has been the most severe.  Further distributions will be based on the needs identified in other flood-affected regions. There is an urgent need to further replenish the contingency stock to enable partners to respond to the growing needs across Somalia.

IOM in collaboration with the Ministry of Health is delivering emergency primary healthcare services in affected areas. IOM has also prepositioned large stocks of emergency medical supplies to enable rapid expansion of services in response to additional flood-induced displacement and disease outbreaks. This will be accompanied by hygiene and health promotion campaigns specifically targeting flood-affected communities, emphasizing prevention of waterborne diseases and malaria.

Around 6,000 hygiene kits will also be distributed for flood-affected communities in Kismayo, Afmadow and Doolow to support their recovery. To complement this, IOM will begin the reconstruction and rehabilitation of 900 latrines in Baidoa and Doolow, as well as road repairs.

“IOM, using its strong field presence, is providing immediate support to those affected by flood to complement government efforts,” said Dyane Epstein, IOM Chief of Mission for Somalia. “But despite our best efforts, it is not enough. This is an alarming situation, which needs urgent attention and a coordinated, quick response.”

The floods have destroyed the shelters of vulnerable families already living in Internally Displaced Persons (IDP) sites and washed away their belongings.

“In Baidoa, people have moved to high ground where they are in immediate need of support in terms of WASH, food, shelter, health and nutrition supplies,” said Nasir Arush, Minister for Humanitarian and Disaster Management, South West State.

Ubah Hassan, a leader at Fanole internally displaced persons’ site, added: “The floods have soaked all our belongings—including food, beds and clothes. Many latrines have collapsed and many more are likely to collapse if the rain continues.”

Fanole is among 14 sites in Kismayo that have been affected by the flooding.

In Doolow, where IOM supports two large IDP sites, assessments conducted found that more than 2,000 households have been affected by the rain.

“During the assessment we found destroyed shelters and latrines, while personal belongings of the community were completely washed away,” reported one Camp Coordination and Camp Management Officer in Doolow. “There is a fear of increased risks of diseases such as Acute Watery Diarrhoea and malaria infection due to contamination of water supplies and stagnant water.”

Other areas in Lower Juba, Gedo and Bay regions, where IOM has supported displaced populations for years, have also been affected. In these areas, the displaced are stranded without food, latrines or shelter.

Urgent needs such as mosquito nets, shelter and NFI kits, drainage systems, flood mitigation kits and road repairs remain across many of the flood-affected regions, and the situation is predicted to worsen in the coming weeks. The government authorities have appealed for further assistance to respond to these devastating floods.