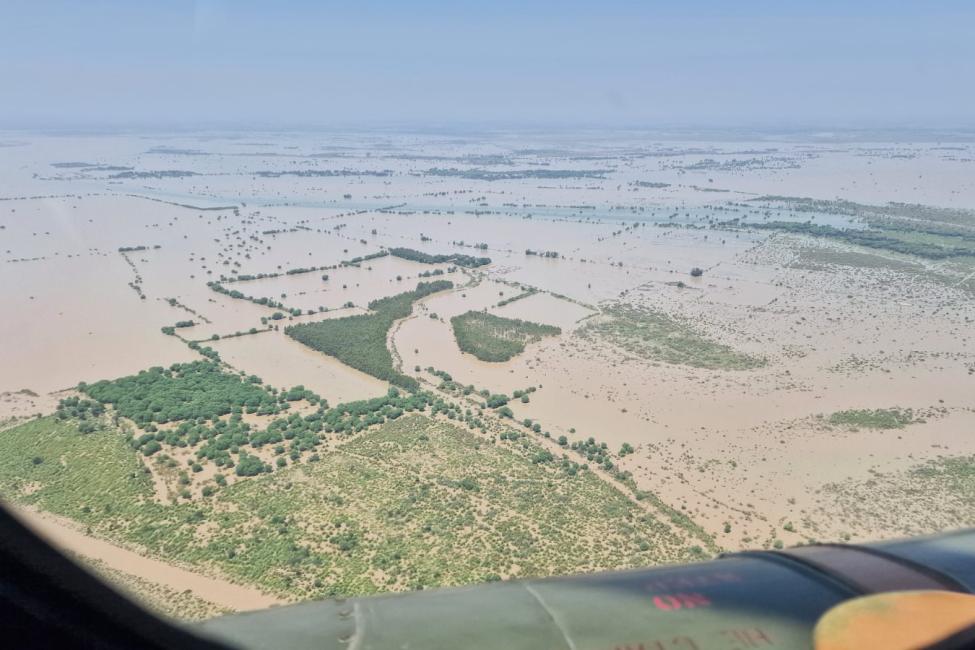 Aerial view of the zone affected by the floods in Pakistan. Photo: IOM

Islamabad – The International Organization for Migration (IOM) Deputy Director General for Operations, Ugochi Daniels, has expressed solidarity with the Government and people of Pakistan and called for an urgent international humanitarian emergency response following the devastation caused by unprecedented floods across one-third of the country.

During her first official visit to Pakistan with IOM, Daniels highlighted the role the Organization is ready to play in responding to the rising needs caused by one of the largest climate-change related disasters in recent years.

“The Government has responded quickly but the scale of this emergency is massive, and the country needs support,” said Daniels. “The number one need for millions of affected people is shelter, and IOM is mobilizing to support based on our experience responding to the 2005 earthquake and the floods in 2010. We stand strong in solidarity with the people of Pakistan, especially those in Sindh and Balochistan provinces, most affected by these floods.”

Since mid-June 2022, up to 33 million people have been affected by severe monsoon weather, which saw rainfall of 67 per cent above normal levels. The storms and heavy rains have caused widespread flash floods and landslides, with severe impacts on human lives, property and livelihoods, and infrastructure.

The southern and central regions of the country, particularly in Balochistan, Sindh and the south of Punjab province, are the most affected areas. At least 1,162 people were killed and 3,554 people injured. Over 1,057,388 houses have been damaged, out of which 324,386 have been fully destroyed.

Moreover, 5,063 kilometres of roads, 243 bridges and 173 shops have also been damaged or destroyed.  Crops and livestock have been damaged or lost. The scale and horrifying impacts of this overwhelming monsoon highlight the importance of effective early warning systems and the need to prioritize climate resilient development. Investment must start with the humanitarian response and progress to recovery that fosters adaptation to future climate disasters.

Speaking from Islamabad after returning from a visit with Ahsan Iqbal Chaudhary, Minister of Planning, Development and Special Initiatives, and Major General Ahsan Waqas Kayani of the National Disaster Management Authority (NDMA) to the affected Sindh and Balochistan provinces on 31 August, Daniels outlined the sheer scale of the required response: “It’s not just about returning to their homes. The whole agricultural economy has collapsed. There is going to be a need for significant investment to restore the economy, the livelihoods, and to rebuild what has been affected or lost.”

IOM, together with the Government of Pakistan, the United Nations and other partners, is responding with a comprehensive and coordinated approach to respond both to immediate humanitarian needs and lay ground for recovery through economic revitalization and infrastructure and shelter rehabilitation. Needs, in order of priority, are food, shelter, health, water and sanitation, and livelihoods.