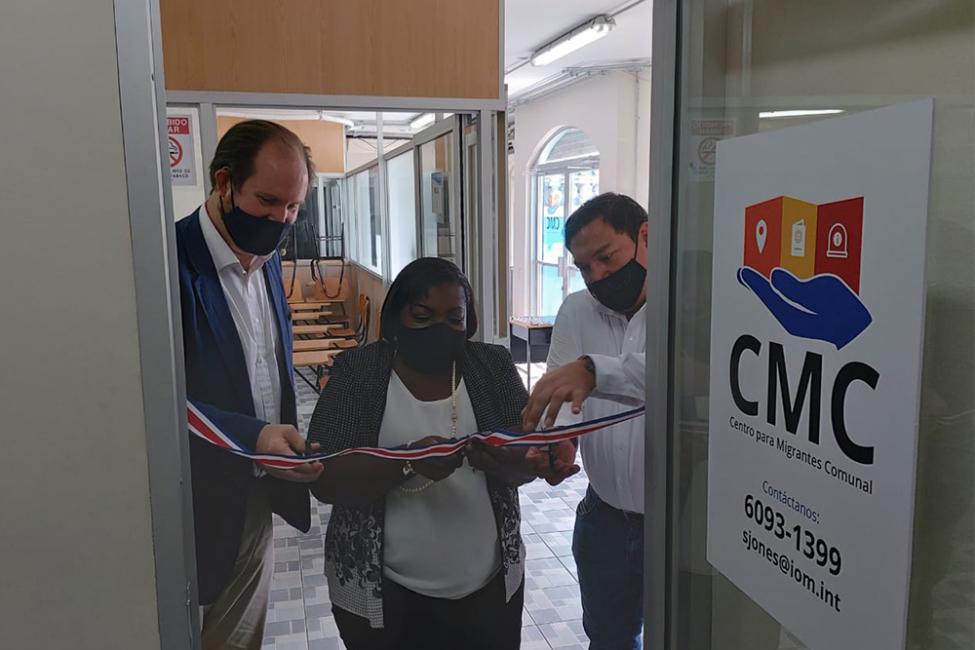 On January 20, IOM opened its sixth Center for Migrants in Costa Rica, located in the Caribbean port of Limón. Photo: IOM/Allen Ulloa

It’s a worldwide challenge as societies everywhere struggle to regulate the workforce participation of newly arrived workers from outside their countries. Governments seek to balance the needs of local workers concerned with new entries to the labor market as well as the needs of migrants, many of them undocumented, who seek to feed their families while trying to integrate into their new communities.

Costa Rica, historically has been the largest destination country of the Central American region, with over half a million foreign residents registered as of 2020 – or 11 per cent, of a total population of around five million.

For decades, Costa Rica has attracted migrants from bordering Panama and Nicaragua, as well as nearby Colombia, Cuba and the rest of the Caribbean basin. More recently, the country has seen an increase in new arrivals from Venezuela, Haiti and the Dominican Republic, as well as from “extra continental” countries of origin in Africa and Asia.

The International Organization for Migration (IOM) has been helping Costa Rica accommodate hundreds of migrants, especially from Venezuela. Many undocumented migrants lack permission to seek jobs in the formal economy, even where openings exist and employers are eager to hire them. Others seek to open their own businesses, but are concerned about their irregular status.

To foster social cohesion and allow both sides to seek an accommodation, IOM has opened six of a planned 11 municipal migration centers in Costa Rican cities, the latest a few weeks ago in Limon, on the country’s Caribbean coast. Others are up and running in the country’s municipalities of Upala, Desamparados, Talamanca, Mora and Tarrazú. IOM has plans to open five more during the course of this year.

These Municipal Centers for Migrants (Centros Municipales para Migrantes in Spanish) provide safe and reliable information to help migrants regularize their migratory status and access institutions and services. More important, these Centers are information repositories where migrants can be informed of educational and job opportunities, which help them become more self-reliant and, overall, learn to be active participants in their communities, regardless of migratory status.

Participants in IOM’s entrepreneur course are eligible to regularize their migratory status under a special visa category for owners of a “properly registered business,” one way that centers like the one in Limón help individual migrants be financially independent and create jobs for others.

Roeland de Wilde, Chief of Mission of IOM in Costa Rica, explained that one of the activities supported by the Center builds on an entrepreneurship course that IOM established with Universidad Latina de Costa Rica (ULATINA).

“IOM has trained 485 people and supported the creation or formalization of 36 small and medium-sized businesses, employing over 100 persons in Costa Rica despite the COVID-19 crisis,” de Wilde said at the latest center’s opening on 20 January.

Epsy Campbell Barr, First Vice President of Costa Rica, emphasized at the opening that “the center also promotes the strengthening of entrepreneurship in the community, adding cultural capital to the sustainable economic development, including tourism.”

These centers, added Marvin Rodríguez, Second Vice President of Costa Rica, exemplify “coordination of the government with the private sector, local authorities and the international community.”

Such a process helped Ana Cristina Díaz, a Venezuelan migrant who graduated from the course in 2019. Today, she is the owner of a business selling corn meal arepas with Legson Pedrique, also from Venezuela, as partner.

Silvia Torres, who owns a piñata business, noted: “IOM has provided me with the tools to manage our businesses in a more legal way. Even being just a small company, I was able to register as small enterprise.”

The new center in Limón opened as part of the Regional Project “Integrated Responses on Migration in Central America,” funded by the US Agency for International Development, or USAID, to support migrants and returnees.