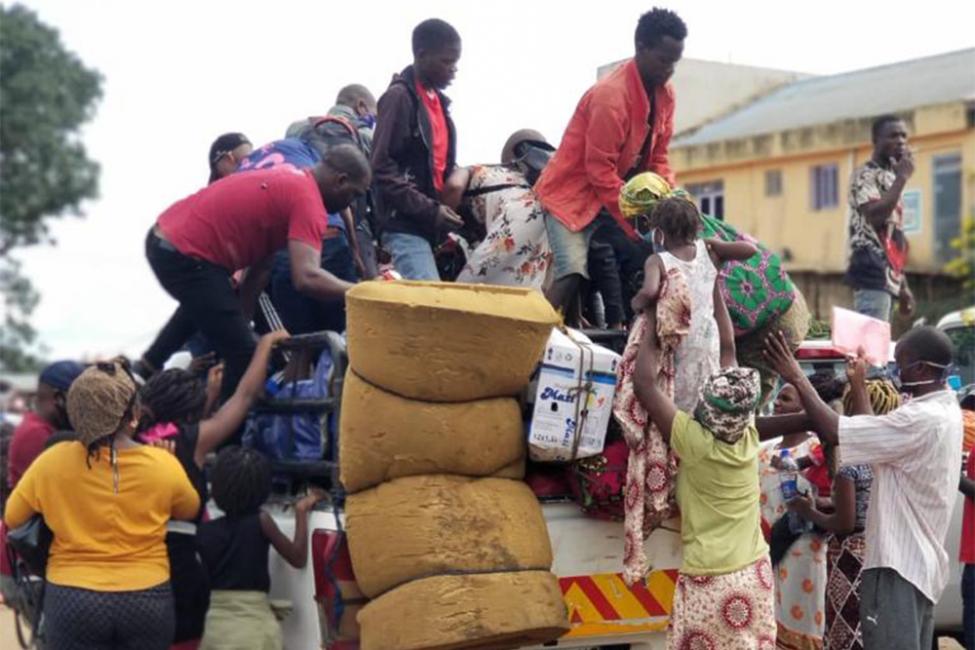 More than 3,300 survivors of the latest round of violence in Cabo Delgado, Mozambique, have fled to safely including this group who arrived today in Montepuez. Photo: IOM

Pemba – The International Organization for Migration (IOM) is deeply concerned about reports of continuing violence in Northern Mozambique that has displaced thousands of people, the majority of whom are women and children, from Palma to neighbouring districts.

“We denounce in the strongest possible terms these reprehensible attacks on innocent civilians,” said IOM’s Director General António Vitorino.  “Our teams are helping survivors arriving in neighbouring districts and we are expanding our efforts to meet the growing needs as more people arrive from Palma. We urgently call upon the donor community to help us help the thousands of people fleeing armed men and burning villages.”

IOM’s Displacement Tracking Matrix has registered 3,361 internally displaced persons (IDPs), 672 families, arriving by foot, bus, plane and boat from Palma to Nanagde, Mueda, Montpeuze districts, and Pemba city. More than three-quarters of those who have arrived are women and children. The number of people who have been displaced is likely significantly higher; thousands more are thought to be in the forest, making their way by foot to safer areas.

A total of 670,000 persons have been internally displaced in northern Mozambique since the onset of violence in October 2017. The current situation exacerbates the vulnerabilities of a county already reeling from the impact of Cyclone Eloise in January, and past natural disasters.

Survivors told IOM staff they fled into the forests as armed men killed their family members and burned their homes. Many were separated from their loved ones, leaving with just the clothes on their backs. Many people are reported missing.

Twenty-eight-year-old Omar Adremar said he fled with his wife and 18-month-old child as the sounds of gunfire and grenades rang through the streets of Palma last Wednesday.  “We walked three hours through the forest in order to avoid the conflict areas,” he told IOM staff after arriving on a flight to Pemba this morning. “Many of my friends and neighbours escaped but others disappeared. We feel very sad about what happened.”

IOM is running a large humanitarian life-saving operation to respond to the immediate needs of the IDPs and other vulnerable communities through the country and is scaling up its response to the sharply deteriorating situation in Northern Mozambique.

IOM is preparing wheelchairs and crutches for the injured, distributing emergency medical supplies including masks, water buckets, water purifying tablets and soap to help prevent the spread of COVID-19 and cholera, and is preparing basic shelter and household items for distribution.

Mental health, psychosocial counselling and protection assistance has already been provided to hundreds of displaced people.

Camp Coordination and Camp Management teams are working with the Government of Mozambique to ensure that populations that come to temporary sites or relocation sites have access to services and protection.