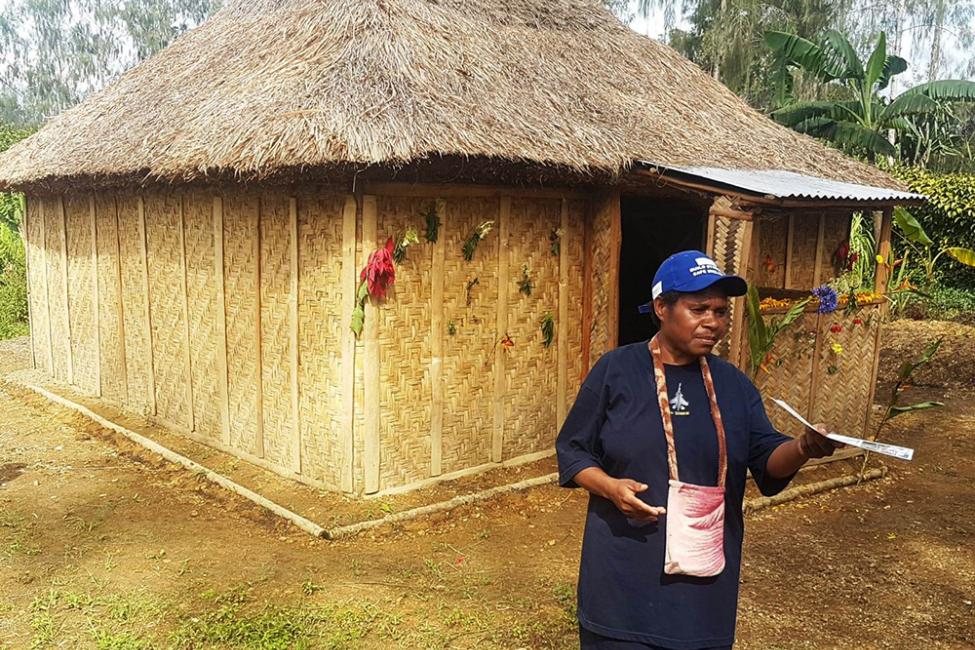 Port Moresby – A year ago, Papua New Guinea was struck by a 7.5 magnitude earthquake that damaged many homes and displaced local communities. IOM used its Displacement Tracking Matrix to map out locations hosting the displaced, identifying their needs, including shelter, to inform the humanitarian response.

In partnership with the government at national and provincial levels and supported by the United Nations country team, between August–October 2018 IOM targeted 51 women from Southern Highlands and Hela provinces with a ‘Training of Trainers’ to ‘Build Back Safer.’ Following the training it distributed shelter construction tool kits to them and other disaster-affected families.

The tool kits included a claw hammer, hand saw, nails and tie wire and the women gathered local bush materials to rebuild their houses. The safer building techniques that they had learnt will help the buildings to survive future storms and other disasters.

Diane Joel, who took part in the training and received a shelter toolkit rebuilt her three-bedroom house in Humbra community. She noted that the training raised community awareness on building safer, more resilient shelters better able to withstand extreme weather conditions. "IOM taught us how to build safer homes and this is the house which I have built. It is safe for me to live in and when a natural disaster strikes, we will be safe,” she said.

The ‘Build Back Safer’ training has also helped to address the cultural perceptions which previously limited women’s participation in constructing. “The task of building homes used to be for men, but after the training I can say we are able to direct our men to build homes,” she added.

“Build Back Safer” graduates are sharing their new skills with their families and other community members, several of whom have also rebuilt their houses to make them safer and more resilient.