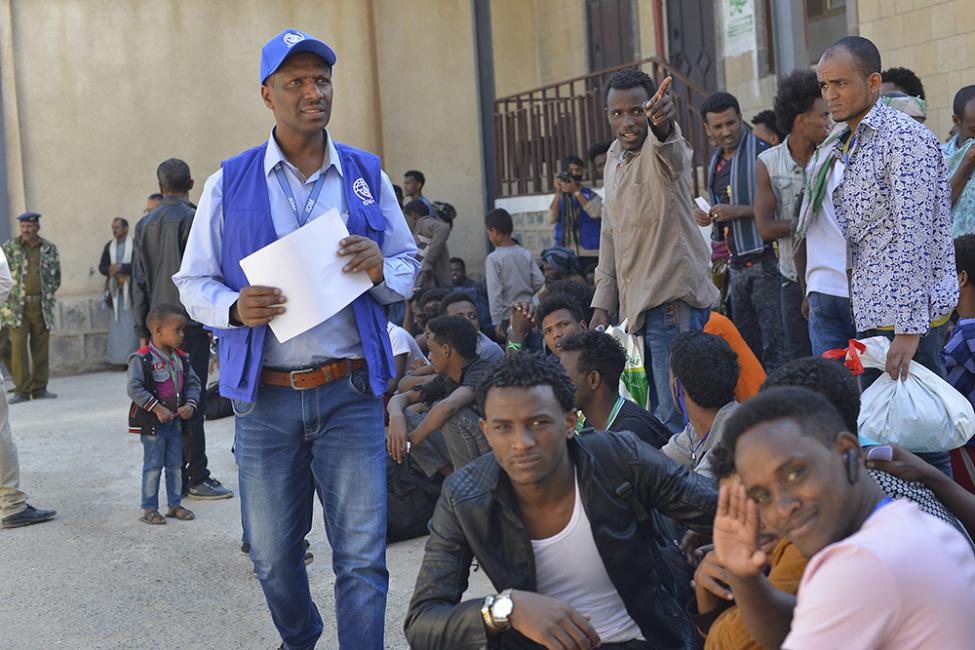 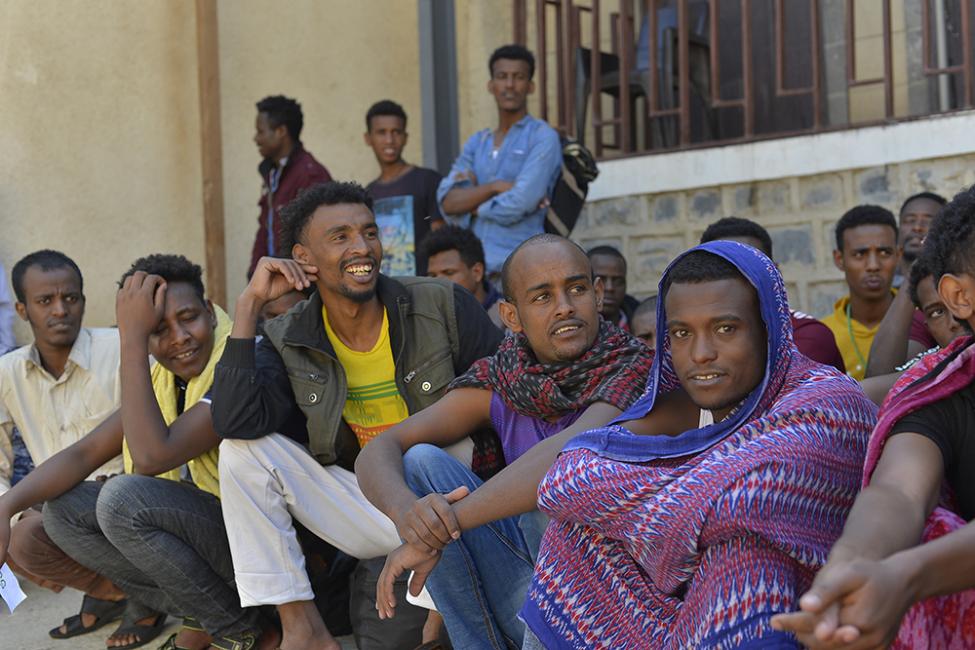 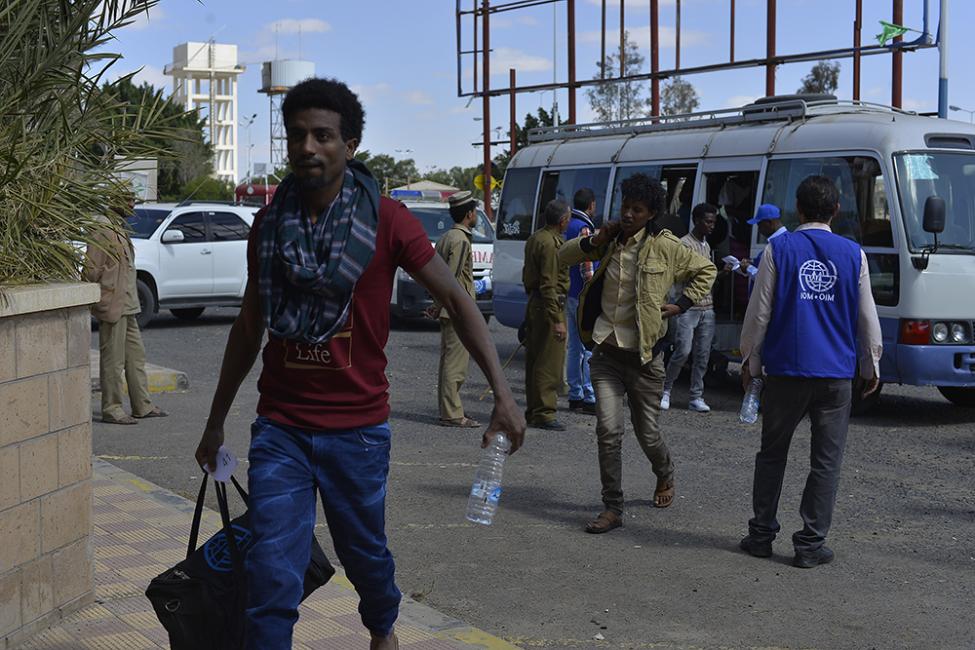 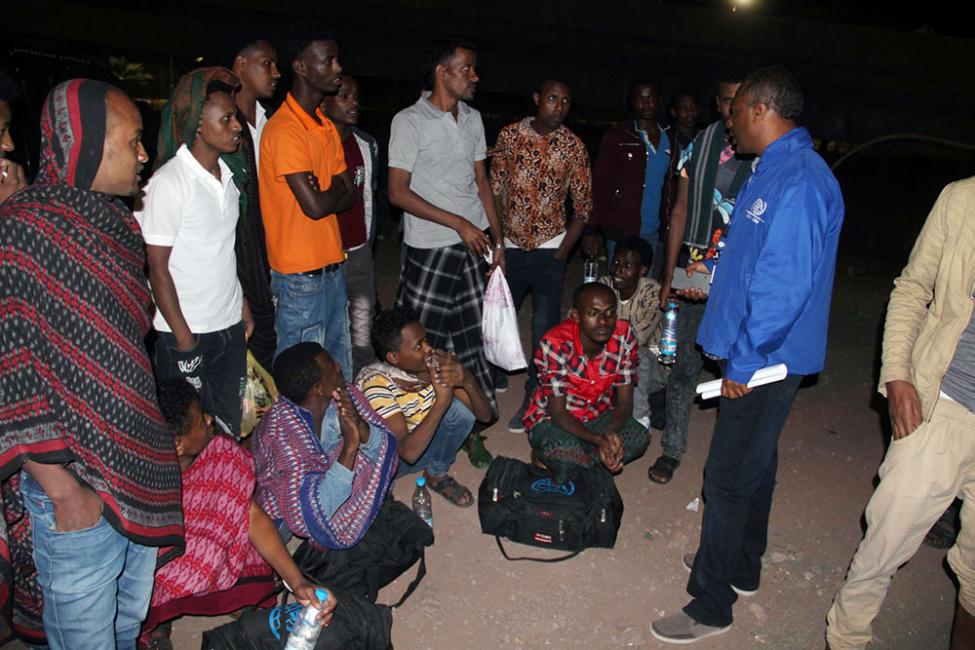 The UN Migration Agency (IOM) began assisting 418 Ethiopian migrants in Yemen to safely return yesterday in a Voluntary Humanitarian Return (VHR) operation. “The operation will continue for another four days, and we hope that it would continue in the future as it is a much safer method of moving migrants home,” said John McCue, IOM Deputy Chief of Mission in Yemen during the embarkment of the first airlift on 26 November.

Sana’a / Addis Ababa – The UN Migration Agency (IOM) this week (26-29 November) began assisting 418 Ethiopian migrants stranded in Yemen to safely return under IOM’s Voluntary Humanitarian Return (VHR) operation. This is IOM’s first airlift since shortly after the conflict broke out in 2015 and the largest VHR operation carried out by IOM in Yemen to date.

IOM has been assisting many of the migrants returning this week for at least six months. Already in 2018, IOM’s VHR programme has assisted 668 migrants to return to Ethiopia on ships carrying migrants across the Gulf of Aden. Unstable weather conditions at sea combined with escalated fighting in and around Al Hudaydah ports posed major operational challenges in previous return operations.

“The first airlift return operation increases IOM’s ability to ensure that migrants who wish to leave Yemen can do so in a safe and dignified manner,” said Mohammed Abdiker, IOM’s Director of Operations and Emergencies, who added: “The airlift, made possible through close cooperation with authorities in Yemen and Ethiopia, opens the way for improved humanitarian assistance for migrants in Yemen.”

The ongoing conflict – now well into its fourth year – has not stemmed the flow of migrants to Yemen from Africa. Most of those migrants are intent on reaching Yemen and the Gulf countries for work opportunities. Yet upon arrival in Yemen, many discover they are unable to continue the journey due to the security situation, which includes severely restricted land routes and closed borders.

“A significant portion of the new arrivals are unaware of the severity of the situation in Yemen or the distance they will have to transit. They have found themselves stranded in a conflict-stricken country without access to basic needs and subjected to multiple forms of abuse, exploitation and violence,” said David Derthick, Chief of Mission in IOM Yemen.

The Organization’s VHR Programme is an orderly, humane option provided to migrants willing to return to their country of origin. Prior to departure, migrants receive lifesaving assistance – including food, non-food items and accommodation in addition to medical, mental health and psychosocial care.

As the returnees arrive in Ethiopia, they undergo health screenings before being temporarily housed at an IOM transit centre where they are provided with hot meals, health care referrals and assistance to reach their home communities or final destinations.

For unaccompanied and separated migrant children, IOM provides family tracing assistance, allowing them to eventually reunite with their primary caregivers.

Globally, IOM is committed to ensuring returnees can access opportunities that help them restart their lives and deter them from embarking on dangerous routes in the future.

Additionally, IOM calls for long-term, sustainable measures that protect the dignity and well-being of migrants as they travel across the Horn of Africa and into Yemen. These include enhanced search and rescue missions along treacherous land and sea passages; solutions to the drivers of dangerous migration; and an end to the conflict in Yemen.

An upcoming conference, Drawing on Peace Dividends in the Horn of Africa to Ensure Urgent Enhancements in the Management of Migratory Flows to Yemen and the Gulf Countries, will be convened by IOM next week in Djibouti. The event will bring together governments in the Horn of Africa, and the Gulf, as well as UN and NGO partners, to identify practical solutions to dangerous migration flows and inform the new planning phase of the Regional Migrant Response Plan.

The governments of Canada, the Czech Republic, Germany, the Kingdom of Saudi Arabia, Kuwait, the United Arab Emirates, as well as the UN Office for the Coordination of Humanitarian Affairs, provide support for IOM’s voluntary return programmes.

IOM migrant assistance and protection activities in Yemen and Ethiopia are funded by Canada, the Czech Republic, Denmark, Finland, Germany, Norway, the Kingdom of Saudi Arabia, Sweden, the United Arab Emirates, the United Kingdom, the United States of America as well as the UN Office for the Coordination of Humanitarian Affairs.