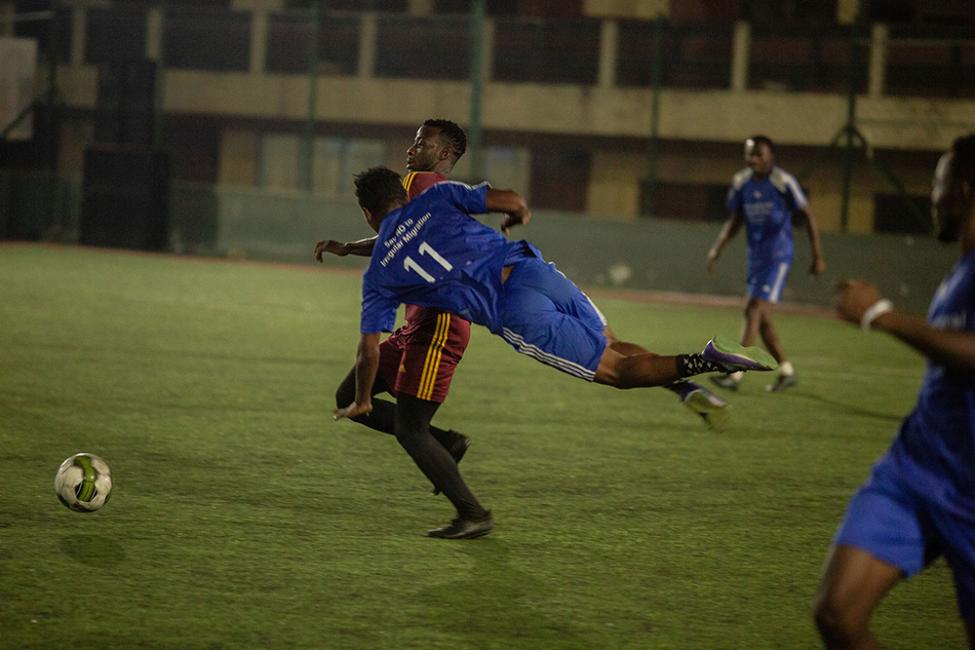 Ghana – 18 December, the International Organization for Migration (IOM) commemorated International Migrants Day and the 2-year anniversary of the EU-IOM Joint Initiative on Migrant Protection and Reintegration in Ghana with a football competition at the Kotobabi Wembley Sports Complex, Accra.

The theme for this year’s celebrations is Migration with Dignity.  It starts at home and it starts first and foremost with protecting the Ghanaian youth from undertaking dangerous migration journeys. In order to continue spreading the important message on safe migration, four migrant-sending communities in the Greater Accra region including Maamobi, Nima, Accra Newton and Madina took part in a football competition around safe migration. The communities were represented by Malaga FC, Los Angeles FC, Paradise Base FC and Madina Youth respectively, with Madina Youth taking the trophy. The safe migration football competition attracted about 1000 spectators from all the four communities as well as Government and non-government partners who have been integral in IOM’s work in Ghana.

Sylvia Lopez-Ekra, Chief of Mission highlighted that the football competition is an opportunity to bring the youth together to highlight the dangers faced by irregular Ghanaian migrants during their journey. She also highlighted that “today we are taking the conversation on irregular migration out of the conference rooms and bringing it to the youth in the communities. We should not do anything for the youth without the youth. We should support them in taking ownership of the safe migration messages, make it their own and carry it forward”.

Movement from Ghana to other parts of the world has grown substantially in recent years.  Many young Ghanaians attempt to reach Europe in search of greener pastures by traveling irregularly through Libya because of mis-information and limited opportunities for safe and regular migration. Many of them either end up losing their lives in the desert on route or while trying to cross the Mediterranean Sea or suffer human rights abuses at the hands of smugglers and traffickers and in detention centres. Providing more channels for safe and legal migration, creating more opportunities for youth as well as raising awareness of communities will help counterpart irregular migration in the country.

The spokesperson of the National Chief Imam, Sheik Aremeyaw Shaibu advised the youth against irregular migration saying that they are crucial for the development of their community “the development of this community depends on you the youth. Ghana, your community and the family need you so before you migrate think about the risks you are likely to face”.

As part of the programme, a presentation highlighting the dangers of irregular migration and the hardships that migrants face on such routes were also showcased. Participants also had the opportunity to listen to two returnees, a man and a woman, whose return was facilitated by IOM.

Ambassador Diana Acconcia, Head of the European Union Delegation to Ghana reaffirmed EU’s commitment to protect the rights of migrants while ensuring safe and legal migration in line with the adoption of the Global Compact for Migration.

The Minister for Inner-Cities and Zongo Development, Hon. Dr. Mustapha Abdul-Hamid, commended IOM for initiating such a community-oriented programme. He tasked the participants to use their talents to the benefit of their community, re-echoing IOM’s campaign message that there is no place like home.

The competition was made possible thanks to the EU-IOM Joint Initiative for Migrant Protection and Reintegration, funded by the European Union and implemented by IOM and the event was also used to mark the 2nd anniversary of this regional project. It is currently being implemented across 14 countries in Sahel and Lake Chad, including Ghana launched in Spring 2017. One of the Joint Initiative’s key achievements has been the strong commitment and engagement of African partner countries in facilitating migrants’ return and reintegration assistance. Thanks to the project, since May 2017, IOM has facilitated the return of 970 (902 males and 68 females) Ghanaians, primarily from Libya but also from Niger, Mali and Burkina Faso.