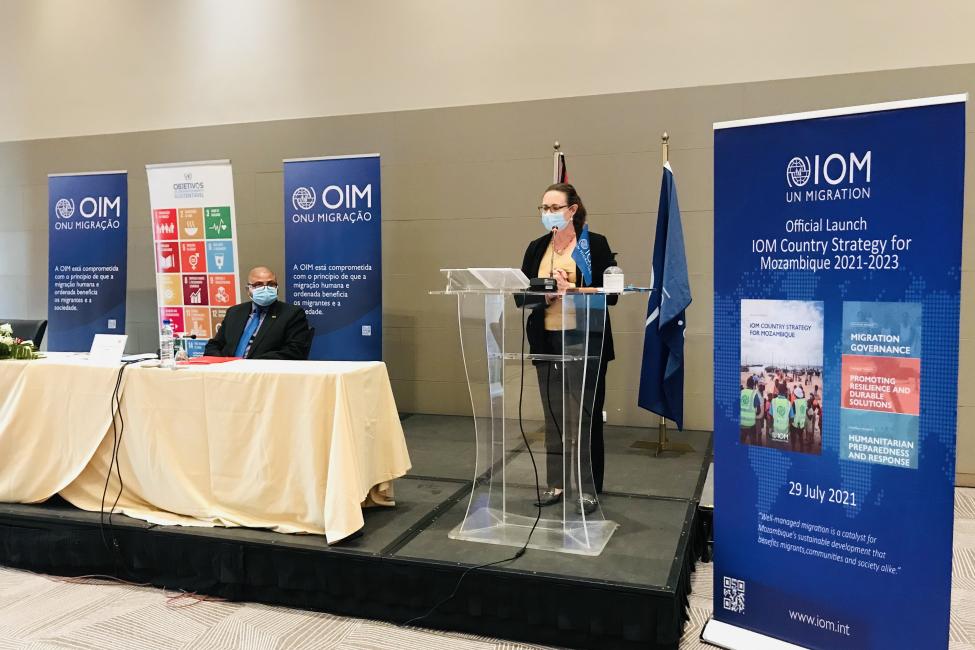 Maputo – The International Organization for Migration (IOM) today launched the Country Strategy for Mozambique, culminating a development process undertaken jointly with the Government of Mozambique and development partners. The strategy lays out programming plans for the 2021-2023 period, focused around three strategic priorities: Migration Governance, Promoting Resilience and Durable Solutions, and Humanitarian Preparedness and Response.

“IOM Mozambique is committed to promote well-managed migration as a key factor for development, by supporting the Government of Mozambique and its partners to implement whole-of-government migration governance approaches that support resilient communities,” said IOM Mozambique Chief of Mission, Laura Tomm-Bonde. “This Strategy lays out plans for continued programming to maximize migration as a contributor to development, while simultaneously responding to those on the move who are in urgent need of support.”

Mozambique is affected by multifaceted migration issues: more than 800,000 persons have been internally displaced due to natural disasters as well as insecurity since 2017. The country is located along the Southern Route migration corridor, frequently used by migrants from East and the Horn of Africa to travel to South Africa. In this context of dynamic human mobility, Mozambique is presented with both challenge and opportunity to leverage the complex relationship between migration and development.

“The IOM Mozambique Strategy follows Mozambique’s own development strategy, as well as the Sustainable Development Goals,” said Francisco Neto Novela, Permanent Secretary of the Ministry of Foreign Affairs and Cooperation, in his remarks during the Strategy launch. “The launch of this Strategy will allow IOM Mozambique to have a new dynamic to its activities. We thank IOM for inclusion and consultation in the elaboration of the strategy.”

“Southern Africa is a region historically characterized by dynamic human mobility that contributes to countries’ economies and also livelihoods of communities,” said Charles Kwenin, Regional Director at the IOM Regional Office for Southern Africa. “This strategy responds to Mozambique’s context and national development agenda. It is embedded in IOM’s belief that migration is a human reality, which if well managed, will benefit countries of origin, transit, and destination, as well as the migrants and society as a whole.”

The Strategy was developed in close coordination with the Government and also included a Government review workshop. Furthermore, IOM consulted a vast number of actors, including NGOs, UN agencies, donors and other partners, through online questionnaires.

The IOM Country Strategy for Mozambique 2021 – 2023 is aligned to IOM’s Continental Strategy for Africa as well as IOM’s Regional Strategy for Southern Africa, in order to consider both regional and continental migration dynamics which reach beyond national boundaries. The Strategy is consistent with the goals of the 2030 Agenda for Sustainable Development (the SDGs) as well as the objectives of the Global Compact for Safe, Orderly and Regular Migration, to which Mozambique is a signatory.

The IOM Country Strategy for Mozambique is available on the IOM Publications website in English and in Portuguese.