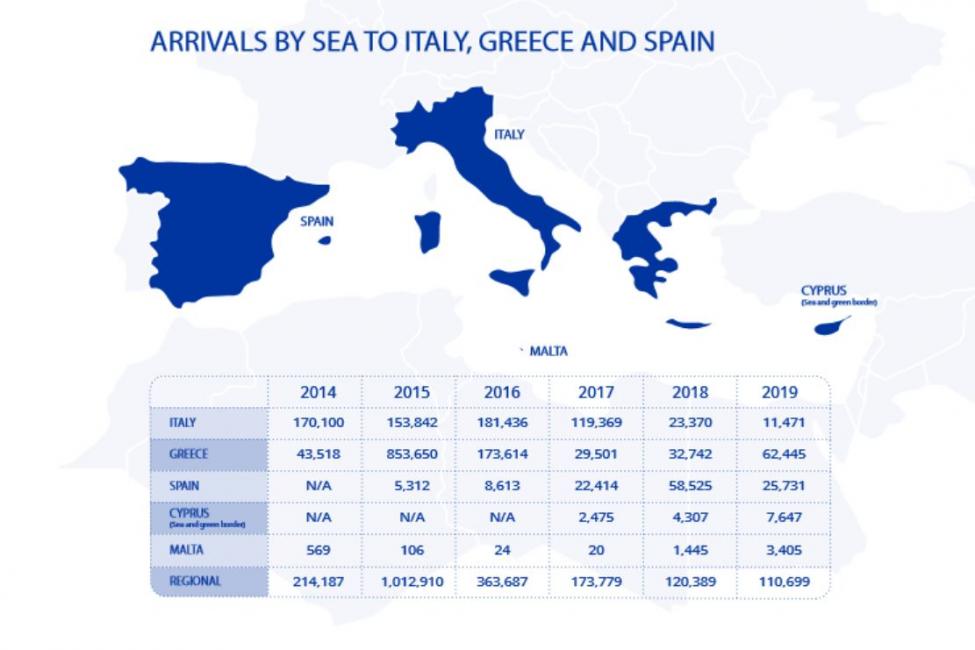 Geneva – The International Organization for Migration reported today 110,669 migrants and refugees entered Europe by sea during the year just ended, marking the sixth straight year that at least 100,000 arrivals were recorded on three Mediterranean Sea Routes. The total is only slightly below the 116,273 men, women and children who crossed the Mediterranean in this fashion in 2018, a decline of about five per cent.

Deaths recorded on the three main Mediterranean Sea routes through 2019 are at 1,283 individuals—or about 44% of the 2,299 deaths confirmed during the same period in 2018. The Mediterranean has claimed the lives of at least 19,164 migrants since 2014.

2019 is the sixth year of IOM’s efforts to systematically record deaths on migration routes worldwide through its Missing Migrants Project. Since the beginning of 2014, the project has recorded the deaths of 34,532 people, including 3,368 in 2019 (see chart below). As has been the case since 2014, the Mediterranean's central route between North Africa and Italy remains the region's deadliest corridor. Missing Migrants researchers estimate one in 33 people died attempting to cross the Central Mediterranean in 2019, compared to one in 35 in 2018 and one in 51 in 2017.

Though the number of deaths recorded fell from 2,299 in 2018 to 1,283 in 2019, these figures do not include a rising number of shipwrecks still yet to be confirmed, according to data collected by IOM’s Missing Migrants Project, based at IOM’s Global Migration Data Analysis Centre (GMDAC) in Berlin, Germany.

That is, this year’s figures do not fully reflect the several ghost boats which went missing in the Mediterranean in 2019, totaling at least 413 people lost at sea whose deaths may never be fully verified. In these cases of ghost boats, no migrants were rescued at sea around the time of the distress calls.

So, while the number of migrant deaths recorded in the Mediterranean is down in 2019 compared to previous years, IOM records indicate that hundreds of lives were lost without a trace this year. These ‘ghost boats’ – vessels reported missing en route to Europe for which no hard evidence can be found – have become increasingly frequent since the search and rescue presence of European and non-governmental actors fell in mid-2017.

One of these unaccounted for boats was carrying at least 73 people and disappeared in the Alborán Sea en route to Spain on 26 November, including 20 women and 3 children. Another boat disappeared in the Western Mediterranean in January, while at least another five vessels went missing off the coast of Libya en route to Italy. In all seven of these 2019 cases recorded by the Missing Migrants Project, no survivors were rescued at sea near the time of the distress calls.

“The remains of those lost at sea this year may never be found, like thousands of others lost in the Mediterranean. Each year that these deaths continue means more families live in limbo, not knowing whether a relative is dead or alive,” said Frank Laczko, Director of IOM’s GMDAC. “If you come from a high-income country, efforts will be made to find and identify your body should you go missing. The same simply does not apply if you are an undocumented migrant.”

Sadly, ghost boats are not a new phenomenon: IOM documented six unverifiable reports of disappeared boats in the Mediterranean between 2014 and 2018. Beyond the Mediterranean, many more boats are believed to have been lost on overseas routes, notably on the Western African route to Spain's Canary Islands. At least 170 migrants lost their lives on this route in 2019, compared to 43 last year.

Elsewhere in 2019, reported fatalities increased in several regions of the world, including Europe, Southeast Asia and the Middle East. The largest increase in fatalities was in the Americas, where 787 men, women and child migrants were confirmed lost, compared with in 593 confirmed in 2018, a rise of almost 33 per cent.

Of those 787 dead in the Americas, a total of 479 deaths--60 per cent--were confirmed just along the U.S.-México border. That is the highest total for border deaths IOM researchers have reported in any year since 2014. Moreover, with some U.S. counties in Texas and Arizona yet to report full end-of-year statistics, that 479 total is likely to rise in the days and weeks to come.

For the latest data on migrant deaths and disappearances, visit IOM’s Missing Migrants Project website here. Raw data can be downloaded from missingmigrants.iom.int/downloads.