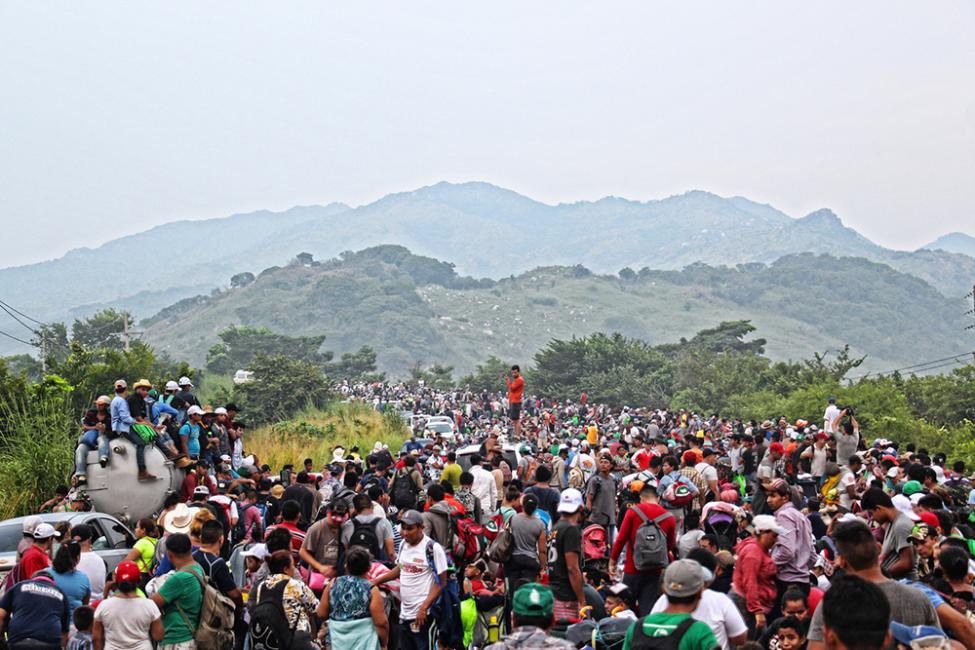 The first caravan reached the town of Matías Romero in Oaxaca state yesterday (01/11). The Mexican Secretary of Foreign Affairs estimates that 4,000 people spent the night there. Photo: Rafael Rodríguez/IOM 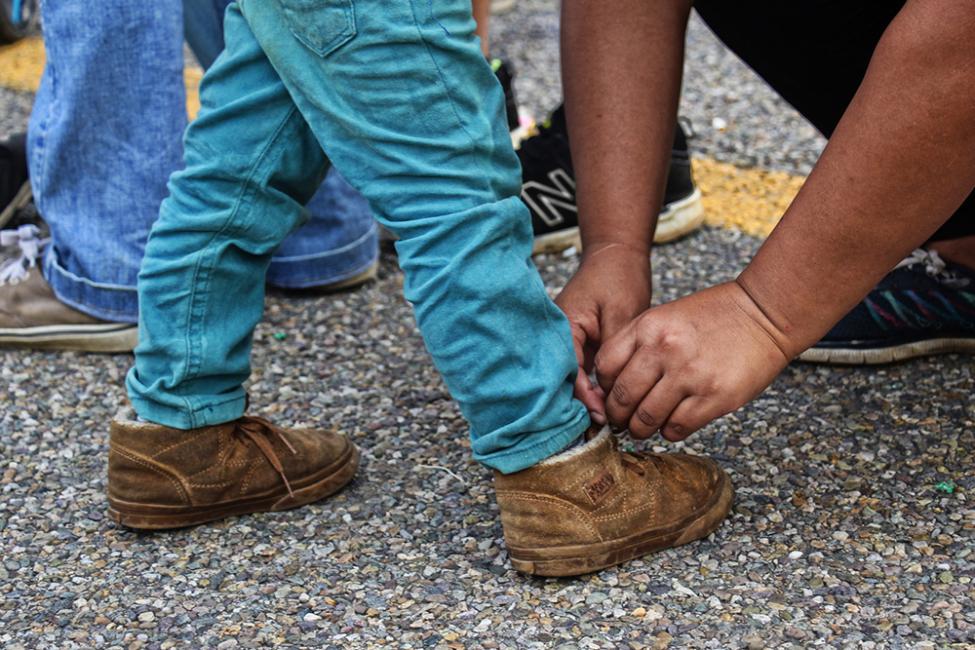 “The effective protection of human rights for all is based on the respect of processes conveyed in international treaties and national laws, which must be the frame of reference for any action that may be implemented in this situation,” said Marcelo Pisani, IOM Regional Director for Central America, North America and the Caribbean. Photo: IOM / Rafael Rodríguez 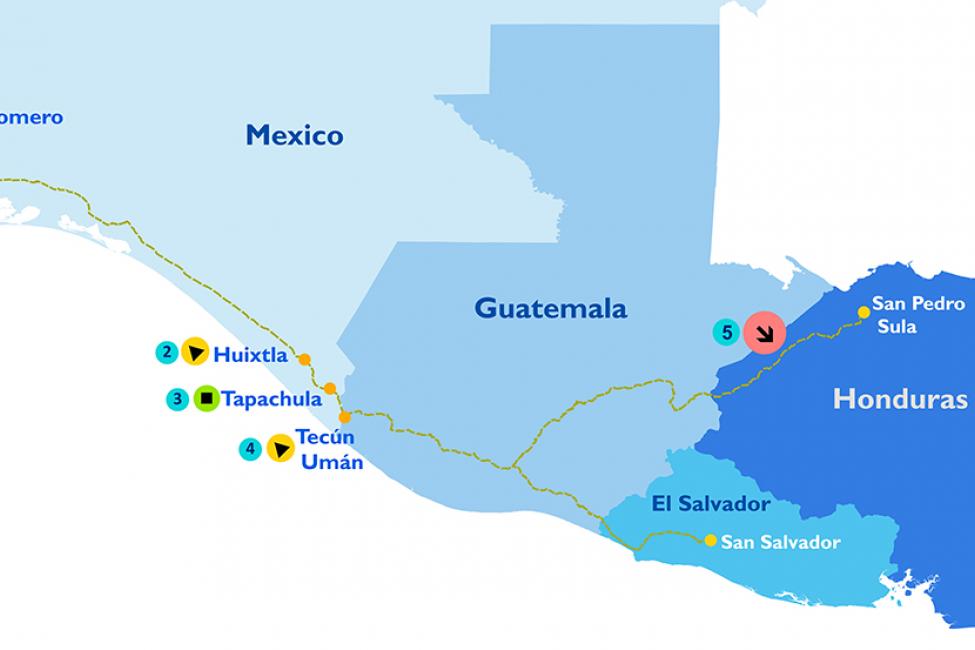 (1) Around 4,000 migrants from the first caravan spent Thursday night (01/11) at Matías Romero (Oaxaca state, Mexico). (2) A second caravan with some 1,800 Central American migrants rested on Thursday (01/11) in Huixtla (Chiapas state). (3) In a temporary shelter managed by the National Institute for Migration (INM) of Mexico, some 1,500 caminantes (“walkers”) who entered Mexico as part of the caravans are waiting for the Government to define their migratory status. (4) Approximately 1,700 Salvadorans who started trekking last Wednesday following the original Caravan arrived yesterday (01/11) at Tecún Umán (Guatemala). (5) Meanwhile, the Honduran government reported over 6,000 voluntary returnees between October 15 and November 1, including regular former members of the caravans and other migrants.

IOM continues to provide support and assistance to migrants who have joined the caravan crossing Central America.

San Jose – The UN Migration Agency, IOM, continues to provide support and assistance to migrants who have joined the migrant caravans crossing Central America and opted to seek asylum in Mexico or return to their countries of origin.

In the Siglo XXI Migratory Station of Tapachula, managed by the National Institute for Migration (INM) of Mexico, IOM and the Mexican Secretary of Foreign Affairs (SRE) have been supplying food and basic hygiene kits to over 1,500 migrants from the caravans seeking asylum in Mexico.

“IOM maintains its position that the human rights and basic needs of all migrants must be respected, regardless of their migratory status,” says Christopher Gascon, IOM Chief of Mission in Mexico. “In coordination with UNHCR we will continue to monitor the situation of the caravan counting on field staff, the Mexican Office of Assistance for Migrants and Refugees (DAPMyR), and partner NGOs, providing information regarding alternatives for regular and safe migration, as well as options for voluntary returns.”

A second caravan of approximately 1,800 Central American migrants admitted on Monday (29/10) by Mexican migration authorities arrived last Wednesday (31/10) in Huixtla, Chiapas state, and plan to move today, according to local authorities. This group initially started the regularization process in Mexico but later opted to continue the trek north without seeking asylum.

A third caravan of around 500 migrants departed from El Salvador last Sunday and crossed Tuesday (30/10) into Mexico, where most of them requested asylum. A fourth group of migrants left on Wednesday (31/10) from San Salvador with some 1,700 individuals, according to an IOM monitoring team. The final group spent last night in the Guatemalan town of Tecún Umán, on the border with Mexico.

Meanwhile, the bulk of the first caravan reached the town of Matías Romero in Oaxaca state yesterday (01/11).  An SRE press release estimates that about 4,000 people spent the night there.

After walking some 850 kilometres from San Pedro Sula in Honduras, fatigue is evident in many of the migrants who spent last night in Matías Romero.

Exhaustion and the challenges ahead have caused many migrants to opt for voluntary return, offered by Mexican authorities and Honduran consular officials.  Counting on its Mesoamerica Program funded by the US State Department’s Bureau of Population, Refugees and Migration (PRM), IOM is now also able to provide voluntary return assistance to migrants.

At the Honduran border control points of Agua Caliente and Santa Rosa de Copan, between 19 and 24 October, IOM provided 2,141 hygiene kits and basic food supplies to returnees. Migrants are returning to Honduras on buses that keep arriving at a rate of four to six per day while other migrants have returned by planes provided by the Mexican government.

“The caravan phenomenon in Central America is another expression of a migration process that the region has been facing for quite some time,” explains Marcelo Pisani, IOM Regional Director for Central America, North America, and the Caribbean. “It is a mixed migration flow, driven by economic factors, family reunification, violence and the search for international protection, among others.

“Nevertheless,” adds Pisani, “we are concerned about the stress and demands that caravans place on the humanitarian community and the asylum systems of receiving countries, which ultimately have limited resources to face this challenge or to properly care for and protect migrants.

“The effective protection of human rights for all is based on the respect of processes conveyed in international treaties and national laws, which must be the frame of reference for any action that may be implemented in this situation,” concluded the IOM Regional Director.