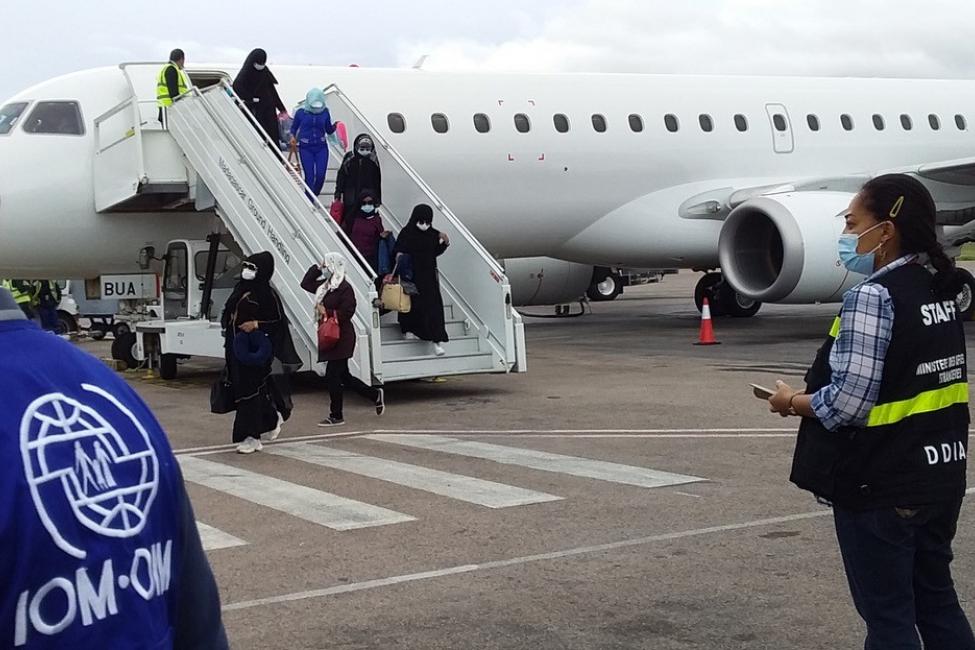 75 Malagasy women arrive in Madagascar from Saudi Arabia on Wednesday, 9 December via a flight chartered by IOM. Photo: IOM/Daniel Silva

Antananarivo – After being stranded for close to nine months, 75 Malagasy women returned to Madagascar from Saudi Arabia on Wednesday, 9 December via a flight chartered by the International Organization for Migration (IOM). Support came from the Governments of Germany and the United Kingdom.

Stranded migrants have become a global concern this pandemic year. In a September 2020 report on COVID-19's Impact on Migrants (read here), IOM ’s Returns Task Force detailed the plight of nearly three million migrants stranded worldwide through mid-July. Many more stranded migrants are believed to have joined those ranks in the subsequent months.

According to the Malagasy Ministry of Foreign Affairs, close to 2,400 nationals have been stranded abroad since March 2020 due to the widespread and sudden closure of national borders to confront COVID-19. This return movement is the third one of Malagasy nationals supported by IOM, after IOM supported the return of 177 nationals from Kuwait (June 2020) and 54 nationals from Lebanon (October 2020), in addition to support provided to individual, highly vulnerable cases of stranded nationals in Somalia, Japan, and Indonesia.

Once stranded, some migrants are at a higher risk of abuse, exploitation, and neglect. The loss of livelihoods can increase vulnerabilities and expose them to exploitation by criminal syndicates, human traffickers and others who take advantage of their situation.  IOM has repeatedly called for migrants to be included in national COVID-19 responses and recovery plans. Too often, however, they are excluded from or, due to their irregular status, may be unwilling to seek health and other social support services, a situation exacerbated in some countries by rising anti-migrant sentiment.

“The COVID 19 Pandemic of 2020 has created unprecedented challenges to migration management, on a global scale, which has not been previously witnessed in our lifetimes,” said IOM Regional Director for Middle East and North Africa, Carmela Godeau “IOM is proud to collaborate with governments that are proactive in the protection of migrants, many of whom have been rendered vulnerable to exploitation and abuse, due to circumstances beyond their control. The support facilitated to Malagasy migrants in Saudi Arabia has been an inspiring example of this collaboration and IOM extends its thanks to the Government of Saudi Arabia and Embassy of Madagascar in Riyadh in achieving this outcome.”

On the Tuesday before their departure, returnees underwent a screening process to determine possible medical conditions in need of immediate attention. They also were tested for COVID-19. IOM supported liaison efforts and engagement between Malagasy Embassy officials in Riyad and the Government of Saudi Arabia to ensure proper and timely completion of administrative formalities. Upon their arrival in Antananarivo, they underwent a second PCR test and began a four-day quarantine.

Upon arrival of the chartered flight in Antananarivo, Daniel Silva y Poveda, IOM Chief of Mission in Madagascar noted: “We very much appreciate the support of both the Government of Saudi Arabia and the Government of Madagascar, in availing all necessary clearances to ensure that this group of vulnerable women returned home safely and in dignity.”