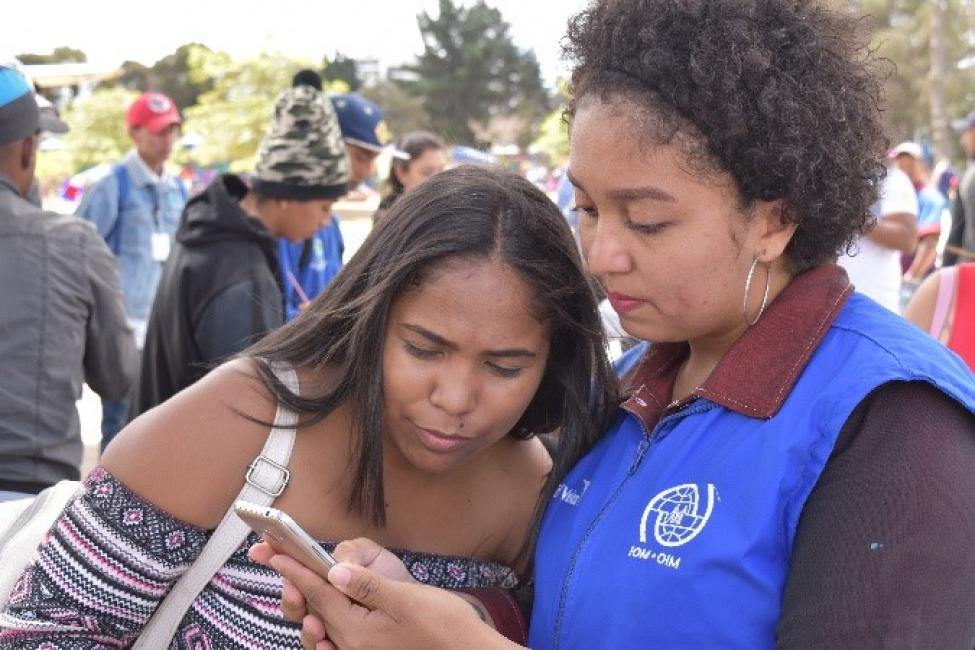 Quito – During the months of August and September, IOM Ecuador implemented the second round of the Displacement Tracking Matrix (DTM) in Ecuador to identify the main characteristics and needs of refugees and migrants from Venezuela.

This second round was carried out through 1,953 surveys conducted in six places: Huaquillas on the southern border with Peru; Rumichaca and San Miguel on the northern borders with Colombia; and Quito, Manta and Guayaquil – main cities with a high affluence of Venezuelans.

All the people surveyed were of legal age. According to the study, the surveyed Venezuelan population is mainly composed of young and single individuals. Among them, 88 per cent were between 18 and 40 years of age. Around 74.6 per cent declared that they were unmarried, and only 24 per cent of Venezuelans mentioned being married or in a free union.

Of the Venezuelans surveyed, 59.5 per cent mentioned that they had finished high school and 34.3 per cent had completed university or some type of technical career education.

Some data on the border crossing reveals that 97 per cent of survey respondents have identity documents and 69.1 per cent used their passports to enter Ecuador. Only 9.2 per cent of Venezuelans surveyed declared having arrived in Ecuador through an informal crossing point.

Regarding living conditions, 54 per cent of respondents said that their sanitation conditions had improved in Ecuador in comparison to the situation in the country of origin. Some 22 per cent of Venezuelans mentioned not having enough money to buy food on the day after the survey; and 98 per cent expressed suffering discrimination related to their nationality.

Among the people who received a job offer in Ecuador, on average 73.3 per cent did so before leaving Venezuela or during the trip. Around 88.7 per cent of those with formal or informal employment mentioned earning less than a basic salary.

This analysis found that some of the greatest protection needs of this population are information and support for obtaining income, resources, and employment.

"The DTM highlights the main characteristics and needs of the Venezuelan population that arrives to Ecuador,” said IOM Ecuador Chief of Mission Manuel Hoff.  “The information provided by the DTM aims to strengthen the humanitarian response and to guide the public policy of human mobility in relation to the Venezuelan nationals."

This activity was financed by the Bureau of Population, Refugees and Migration (PRM) of the United States Department of State, the United Nations Central Emergency Response Fund (CERF), and with the technical support of World Vision.