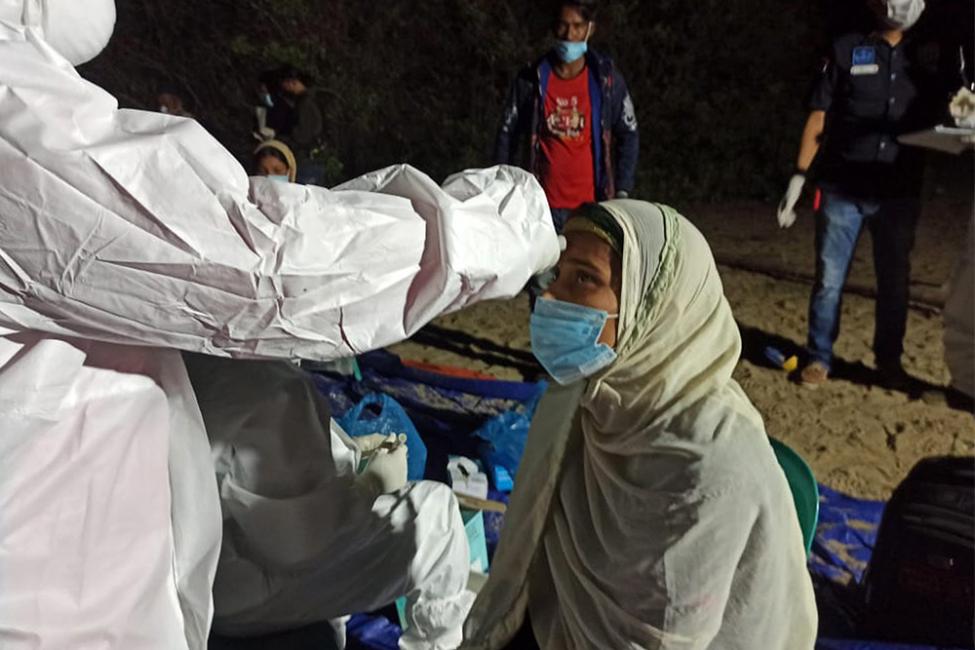 Jakarta/East Aceh – The International Organization for Migration (IOM) is continuing to provide food, drinking water and medical support as part of coordinated efforts to help 81 Rohingya, mostly women and children, rescued by local fishermen in East Aceh on Friday (04/06) after a perilous journey.

A spokesperson from the group told IOM that they set off from Kutupalong and Falong Khali camps in Cox’s Bazar, Bangladesh in the first week of February 2021, headed for Malaysia.

Three days after they set sail, the boat’s engine broke down and they were left floating at sea. Four days later, they were located and rescued by the Indian Navy in the Andaman Islands.

"Nine people died due to sickness before being rescued by the Indian Navy," said the spokesperson.

“We did not have enough drinking water supply, so we had to drink the seawater. Unfortunately, some of us got sick after drinking it.”

The group – consisting of 45 women, 17 men and 19 children – remained on one of the Andaman Islands for almost four months before continuing their journey in mid-May following the first cyclone of the season.

They experienced engine problems again near East Aceh last week. Local fishermen discovered their vessel and brought them to safety on Friday. Upon disembarkation, the local government of Aceh immediately conducted rapid COVID-19 tests and COVID-19 vaccinations for all arrivals.

“Thanks are due again to local community members and authorities in Indonesia for assisting the disembarkation, which – in a humanitarian spirit – has clearly been a life-saving intervention,” said Louis Hoffmann, IOM Chief of Mission in Indonesia.

"We are pleased to be working with partners including the Government of Indonesia, the Geutanyoe Foundation and our donors to ensure a coordinated response to the health and safety of this group at their initial landing site in East Aceh.”

Hoffmann added that important next steps are now underway to help assess and stabilize this group in a more sustainable location in close coordination with UNHCR – the UN Refugee Agency –, and other partners.

This latest rescue comes almost exactly 12 months after 99 Rohingya, mostly women and children, were rescued by local Acehnese fishermen after being stranded at sea for more than 120 days.  Another vessel carrying 296 Rohingya disembarked in Aceh several months later, in September 2020.

"With the experience of last year’s arrivals, we have been able to move quickly to assess initial health and nutritional needs, and – with the leadership of the Government – put in place pandemic health protocols to ensure the protection of this group and local community members,” Hoffman said.

Roughly 1,400 Rohingya found themselves stranded at sea during the 2020 sailing season, which typically ends with the arrival of the monsoon in early June. At least 130 are reported to have died.

“Once again, as the monsoon season gets underway, the dangers facing any vessel at sea increase by the day and we therefore reiterate that a coordinated response to this situation, inclusive of search and rescue operations and safe disembarkation, is urgently needed,” said Dr Nenette Motus, IOM Regional Director for Asia and the Pacific.

“Even as we continue to grapple with the COVID-19 pandemic, particularly in this region, we must work collectively to avoid a repeat of the 2015 crisis when thousands of men, women and children faced tremendous challenges in accessing life-saving care and support and many lost their lives at sea.”

IOM’s emergency response to assist the Rohingya disembarkation in Aceh is funded by the European Civil Protection and Humanitarian Aid Operations (ECHO), the U.S. Department of State’s Bureau of Population, Refugees, and Migration (PRM), and the Swiss Agency for Development and Cooperation (SDC).