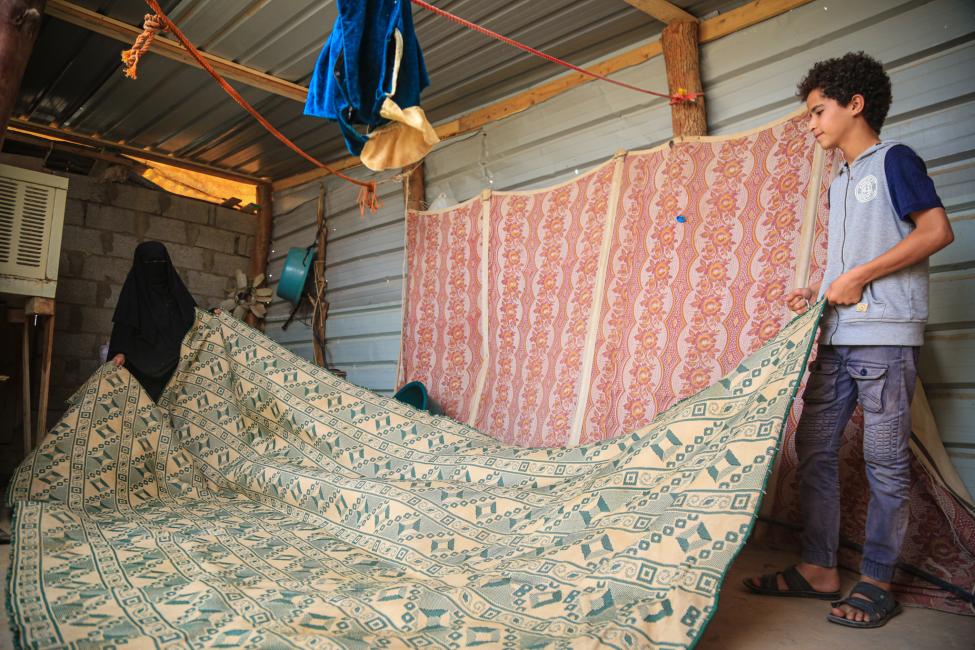 A displaced mother and son in Marib, Yemen, hold up a rug bought with the cash assistance received from IOM. Photo: IOM 2020

Marib – This week, around 3,600 displaced families – over 25,000 people – affected by floods and storms here in April received their second installment of support from the International Organization for Migration (IOM). IOM’s support came in the form of cash assistance to enable families in Yemen to purchase the materials and tools they need to rebuild damaged shelters.

Strong winds and heavy rains have caused massive destruction to thousands of shelters in displacement sites across Yemen earlier this year. Some shelters were partly damaged while others were torn down to the ground. Displaced families, already forced to flee their homes due to the conflict, again were left without places to stay.

Yemen’s Marib governorate hosts some of the country’s largest displacement sites.  Due to its fierce climate and terrain, Marib’s displaced families often find themselves impacted by sandstorms and floods pouring down from surrounding hillsides. Many displaced Marib families lost not only their shelter, but also much of their belongings.

“The scene was heartbreaking,” said Jamal Al Shami, IOM Camp Management and Camp Coordination (CCCM) Field Assistant in Marib. “The strong wind ripped apart shelters, followed by heavy rains and floods that swept away what was left. There was nothing more to fix, and the families along with their children lost everything. They were forced to sleep out in the open.”

IOM, in collaboration with EU Civil Protection and Humanitarian Aid, is providing cash assistance to help displaced families rebuild and improve their damaged shelters in Marib. Before the first installment of assistance was provided in May, IOM teams conducted house-to-house evaluations. Later, they revisited these sites before the second installment to gauge progress in rebuilding. These assessments helped IOM identify each family’s needs.

“We went right after the storm to evaluate the situation and provide immediate help. There were some families who completely lost their shelters, so we supported them with tents, plastic sheets and sandbags for a temporary solution. With these recent installments, IOM established many methods of payments through banks, money transfer points and sometimes house-to-house visits to avoid gatherings, which may have risked COVID-19 transmission,” explained Al Shami.

Of the total number of displacements in 2019, at least 30,000 of new displacements were triggered by disasters, mainly floods. The rainy season in Yemen continues in many of Yemen’s governorates, putting already vulnerable communities further at risk.

As a part of its emergency flood response, IOM provided over 100 tents for families with totally damaged shelters and 150 essential aid items, as well as more than 8,100 plastic sheets, 5,260 sandbags and nearly 2,000 pieces of rope, reaching a total of 5,121 Marib families.

This emergency assistance was supported by USAID’s Bureau of Humanitarian Assistance.