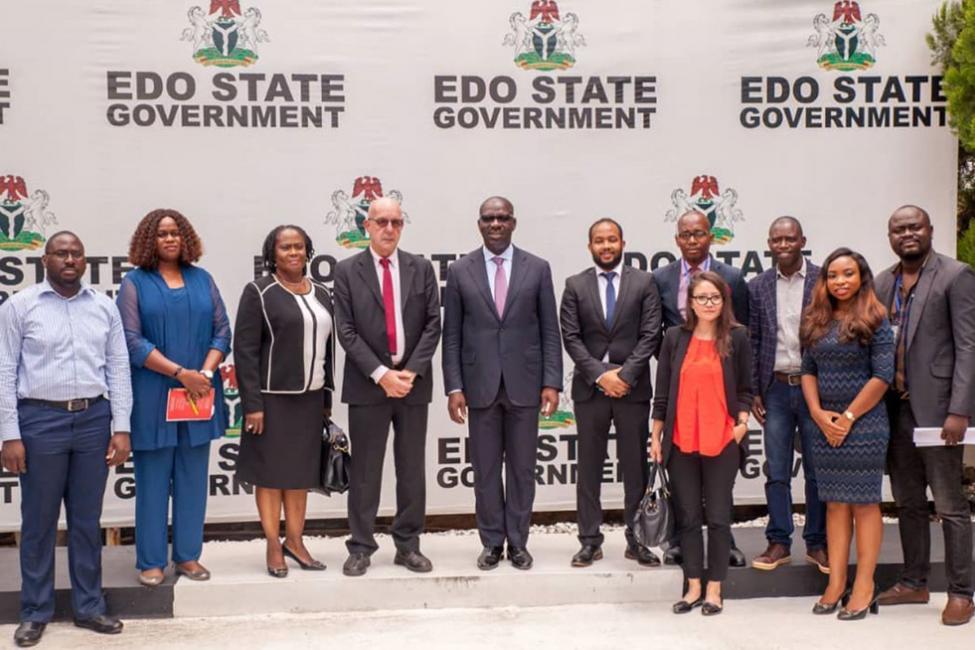 IOM Regional Director for West and Central Africa Richard Danziger visits the Governor and the lyase (Prime Minister) of Benin, and discuss the recent steps taken to combat human trafficking in the region prone to irregular migration. Photo: IOM 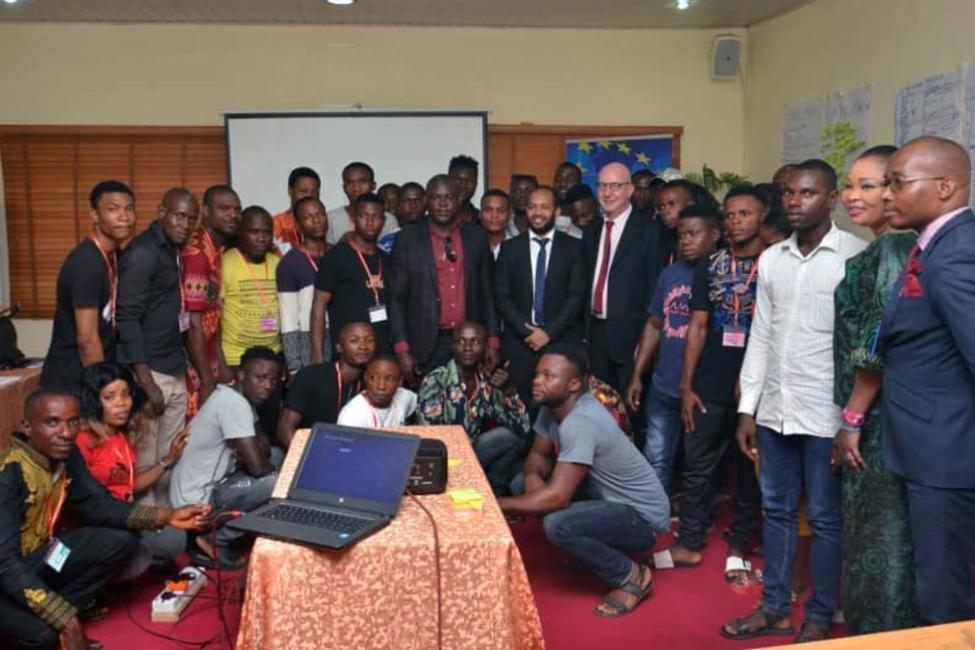 IOM Regional Director for West and Central Africa Richard Danziger meets with returnees who were attending business skills training in preparation for their reintegration assistance under the EU-IOM Joint Initiative for Migrant Protection and Reintegration in Nigeria. Photo: IOM

Benin City – Representatives for IOM, the UN Migration Agency, recently went to Edo State, Nigeria to pay a courtesy visit to the Governor and the lyase (Prime Minister) of Benin, and discuss the recent steps taken to combat human trafficking in the region prone to irregular migration.

Richard Danziger, IOM Regional Director for West and Central Africa, also met with over 80 returnees who were attending business skills training in preparation for their reintegration assistance under the EU-IOM Joint Initiative for Migrant Protection and Reintegration in Nigeria.

During the visit, Edo State Governor Godwin Obaseki invited IOM to be part of the coordination team for the State's recent flagship programme Managing Migration through Development Transformation in Edo State, which aims to prevent irregular migration, combat trafficking in persons, reinforce public services in at-risk communities and promote economic prosperity in the region.

“Edo State administration has set the pace in the way it has continued to manage the issue of irregular migration and human trafficking,” said Danziger. “It has set the template for others to borrow from.”

Edo State plans to ensure the eradication of human trafficking and irregular migration affecting the region by 2020, mainly through its new Anti-Trafficking in Persons and Smuggling of Migrants (TiP/SoM) Taskforce – established in 2017 in a bid to provide home-grown solutions to “the menace which has bedeviled the society.”

“If we create opportunities domestically, who says they [potential migrants] will still be interested in leaving?” asked Governor Obaseki. “We cannot stop people from leaving but we can reduce their will to go and the risks they can face when they make the dangerous journey.”

For the past three years, Nigerian has been the main nationality of sea arrivals to Italy, and 59 per cent of the victims of trafficking (VoT) assisted by IOM in 2016 were Nigerians. IOM also estimates that about 80 per cent of Nigerian women and girls arriving by sea in 2016 are likely to be VoT for sexual exploitation; an estimated 94 per cent of these women and girls trafficked to Europe come from Edo State (according to UNODC).

In addition to paying large sums of money to their traffickers, Nigerian victims of trafficking are subjected to a voodoo rite which forbids them from breaking the ‘contract’ they have entered into with the trafficker. The fear of breaking the voodoo oath is a tool of subordination which deeply affects the victims of trafficking and impacts their will to return home without having fully paid their “debt”. Thus the role of traditional and religious leaders is vital in breaking these chains and rescuing the victims.

After his visit to Edo State Governor, Danziger visited Chief Sam Igbe, the lyase of Benin, and discussed the Royal Majesty Oba of Benin’s recent statement revoking the voodoo oath and placing a curse on perpetrators of human trafficking instead. The hope is that this statement will empower victims to come forward and seek assistance which the federal and state governments provide with the support of partners, including IOM.

“There’s nothing new to see out there,” said Igbe, who stressed that human trafficking is not a ‘tradition’ in Edo State. “It is a lie that you can pick money in the streets in Europe.”

“We need to assist the victims but we also need to address the root causes of migration or this problem will carry on,” Danziger added.

The one-day visit to Edo State ended with a surprise visit to IOM beneficiaries taking their first business skills training as part of their reintegration assistance since they returned from Libya.

Since April 2017, IOM Nigeria has assisted over 8,000 Nigerians to return home safely thanks to the EU-IOM Joint initiative for migrant protection and reintegration.

Prior to his visit with Edo State officials, Richard Danziger met with the ECOWAS President, the Commissioner for Trade, Customs, and Free Movement, and the Commissioner for Social Affairs and Gender to reaffirm IOM’s commitment to support ECOWAS in advancing free movement within the Region.