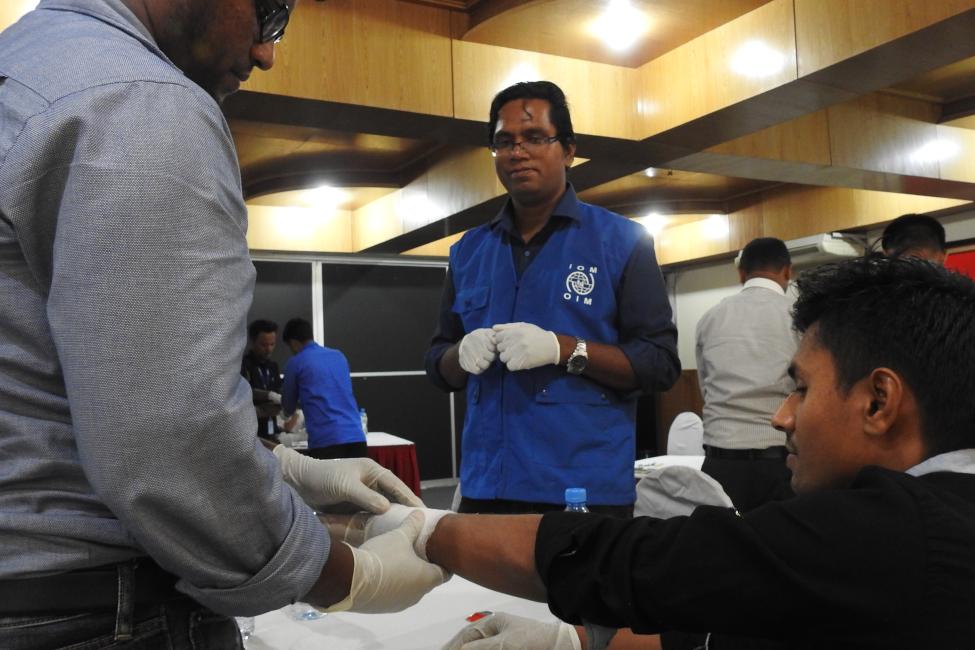 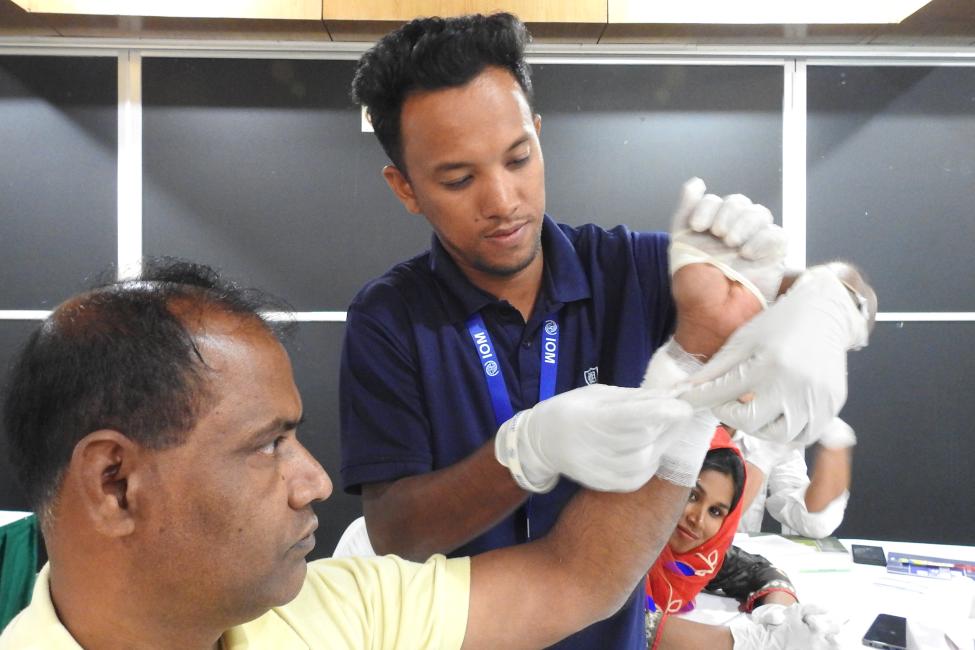 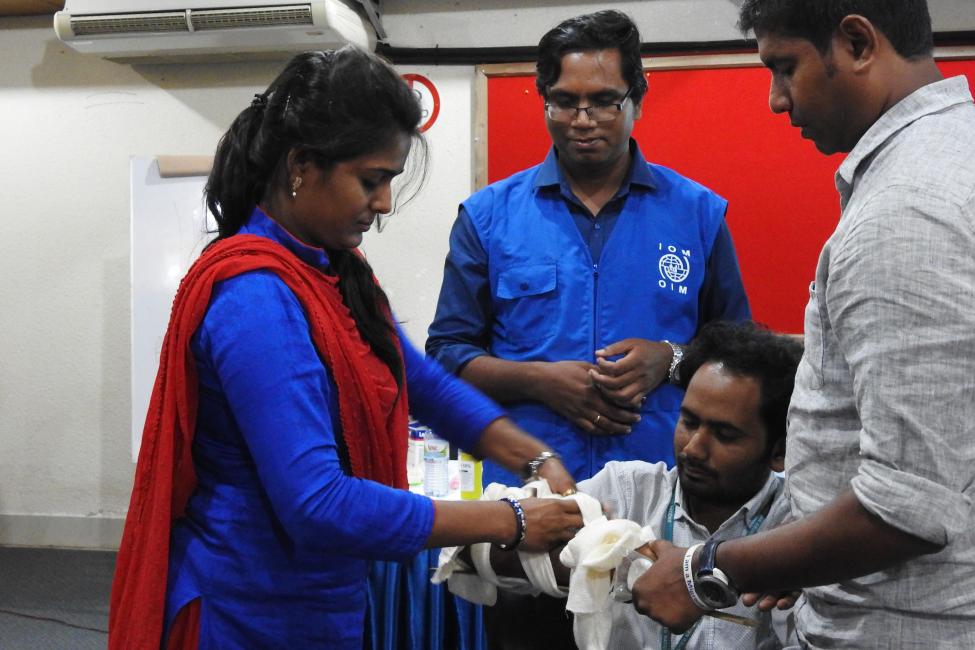 Cox’s Bazar - As heavy rains again lashed Rohingya refugee camps in Cox’s Bazar this week, UN Migration Agency medical staff helped others to gear up for monsoon and cyclone emergencies with the launch of a first aid training program designed to reach hundreds of safety volunteers.

This week’s first aid training saw 35 of IOM’s site management staff trained in emergency first aid. The participants, whose regular jobs involve coordinating and helping refugees access services in the camps, will now pass on their newly-learned first aid skills to around 650 members of safety volunteer units - teams of refugees being trained in emergency response.

Almost a million refugees are braced for extreme weather conditions which are predicted to cause life-threatening floods and landslides on the steep sandy hills of the Cox’s Bazar settlements. Most of the refugees arrived in the district after fleeing violence in Myanmar in August last year.

IOM, partner agencies and the Bangladesh authorities are doing as much as possible to protect the refugee community ahead of the storm season, but topographical dangers and the likelihood of cyclones mean that it will not be possible to mitigate against all disasters.

Consequently the refugees and staff working on the ground need the skills to be able to respond to emergency situations. The safety volunteer units are also being trained in fire safety and search and rescue.

“With the monsoon season coming, the likelihood of injuries occurring due to landslides, storms and cyclones is very high,” said IOM emergency preparedness and response officer Dr Charles Halder. “When casualties occur far from health facilities, these trained individuals will be able to assist with basic first aid and help to bring these cases to a health facility.”

The monsoon is also set to bring other medical challenges. With months of rain and widespread flooding predicted, the risks of waterborne diseases, including acute watery diarrhea (AWD), will rise dramatically.

AWD can cause sudden and life-threatening dehydration and IOM this week opened the first two of five oral-rehydration points being established across the camps. Up to 20 people a day will be able to receive treatment via drips or oral rehydration salts at each point.

Five mobile medical teams are also being trained to provide primary lifesaving health care services to the refugees, when ground conditions during the monsoon restrict access to medical facilities.

Most of the refugees are living in basic shelters made of bamboo and plastic sheeting. Heavy monsoon rains and the constant threat of cyclones will create additional mental stress for a population that has already suffered immensely from ethnic cleansing in Myanmar.

As part of IOM’s emergency preparedness plan for the medical mobile teams, 46 doctors, nurses and paramedics have received training in psychosocial first aid. This will help them to offer people emergency emotional and mental health support during the difficult months ahead.

But IOM is also warning that more funding will be needed in order to continue to deliver life-saving medical services during the monsoon. IOM medical staff already treat almost 80,000 cases a month in the refugee and host communities, and the health challenges posed by the monsoon will almost certainly see those numbers increase.

Without additional funding, deaths will occur which likely could have been prevented with appropriate care. If the lack of funds also restrict IOM’s disease monitoring services, the ability to rapidly detect and respond to communicable diseases such as diphtheria and measles will also be drastically reduced, putting refugees at increased risk of a major outbreak.

“We cannot underestimate the devastating impact and potential loss of life that will occur if we have to reduce our medical services at this critical time,” said John McCue, IOM’s Senior Operations Coordinator in Cox’s Bazar. “The moment to act to reduce the risk of major health emergencies is now and we need financial support to be able to do that.”