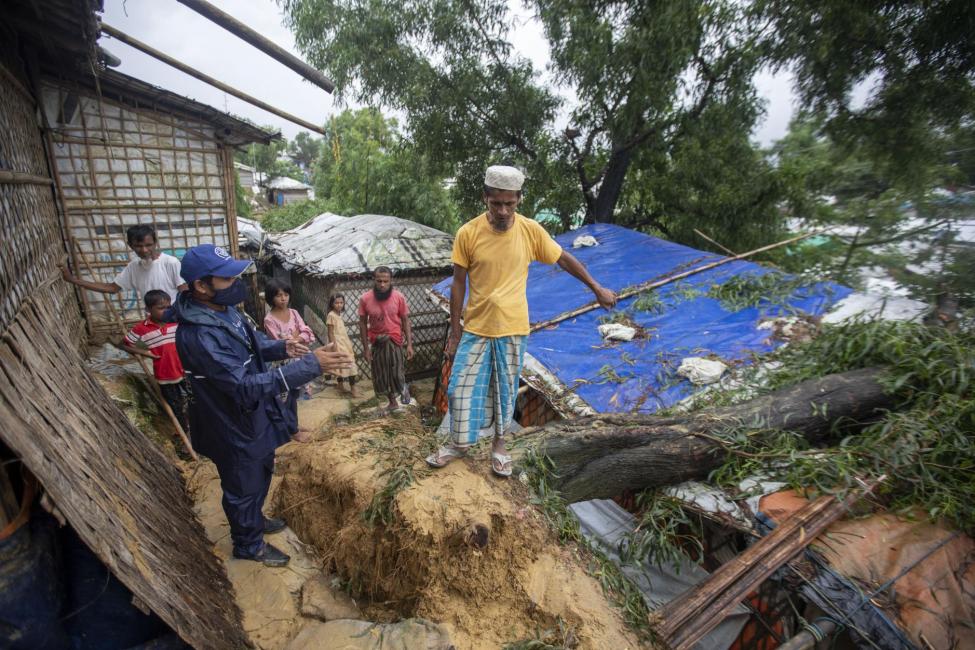 IOM, Rohingya volunteers and partners are working relentlessly to assist those affected by this week’s heavy rains in Bangladesh. Photo: IOM/Mashrif Abdullah Al

Cox’s Bazar – The International Organization for Migration (IOM) said today many of the more than 13,000 Rohingya refugees forced out of their camps by flooding in Cox's Bazar which has killed at least six people were returning to their shelters to salvage belongings after a break in heavy rains, but the risk of more casualties remained high.

IOM said a total of more than 21,000 refugees had been affected and almost 4,000 shelters were destroyed. Food distribution centres, health facilities and water points have been damaged during three days of non-stop rain.

The six confirmed dead were killed in landslides or drowned in two IOM-managed camps and officials fear more flooding and landslides will prevent help reaching others among the total of 884,000 Rohingya refugees in the country.

Access to the camps is hazardous as constant landslides block the main roads leading to the camps, and major routes used by refugees and humanitarian actors are under water.

Up to 2,000 people have been evacuated from landslide-prone areas in Teknaf upazila (sub-district).

“Heavy rainfall is expected during the next few days, and as such, challenges are likely to increase,” said Manuel Marques Pereira, IOM Deputy Chief of Mission in Bangladesh.

“Over the past few months, IOM has been assessing the risk of landslides, strengthening drainage networks, installing slope protection measures and upgrading key pathways. However, despite multiple disaster risk reduction measures being implemented, the camp congestion, excessive rain and poor soil quality, make it extremely difficult to cope with the elements,” Pereira said.

One hundred Rohingya Disaster Management Unit (DMU) volunteers trained in each camp have been working around the clock and focusing on helping the most vulnerable, including the elderly and pregnant women.  IOM teams are assessing the damage and working closely with the different sectors to refer those affected for relevant assistance. Mobile medical teams have been deployed and the protection emergency response unit has been activated.

Families have taken refuge in six different multi-purpose cyclone shelters where they are currently being assisted with relief items, protection and medical support. Since 2019, IOM has been supporting the rehabilitation of MPCS so community members can take shelter in case of disasters.

Additional support is needed to enable teams to continue to assist those affected, as well as the rest of the refugees currently residing in the camps. As always, IOM advocates for the continuation of a comprehensive humanitarian assistance for refugees across all camps.