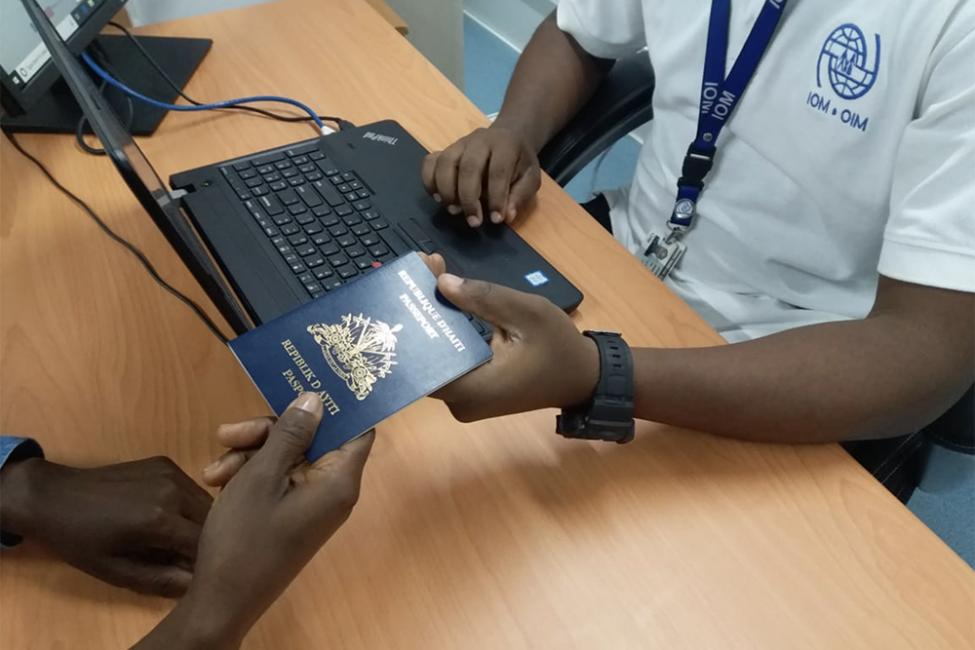 Port-au-Prince – At the request of the Government of Chile, IOM, the UN Migration Agency has opened the first Visa Service Centre for Chile (CAVC) in Haiti, to help Haitian migrants find legal pathways to the South American country. The CAVC opened its doors in the IOM mission compound in Port-au-Prince on Monday, 20 August 2018.

As a result of increased immigration which reached nearly one million foreigners in 2017, the Chilean government instituted new migratory policies in 2018. Through the establishment of new visa categories which include Family Reunification Visas, Haitians can now travel safely and legally to Chile.

Earlier this month, IOM signed an agreement with the Government of Chile to provide administrative support services to assist Haitians wishing to join their families in Chile through the Family Reunification Visa. The CAVC opening is the direct result of this agreement.

“Safe migration is essential and ensures that migrants have legal avenues to seek employment and social services and enables them to better integrate into their host country,” said Shauna Martin, Programme Manager for Migration Management, IOM Haiti.

The Family Reunification Visa was announced in April and became effective this month. The Chilean Chancellor Roberto Ampuero confirmed that as of 2 July 2018, Haitians in Chile with legal status can apply for a 12-month visa for family reunification with IOM’s support.

"The importance of this document is to allow children to not be separated from their families, as well as to give them protection, dignity and well-being," said Ampuero, in quotes carried by El Mercurio newspaper.

These changes in Chilean migratory policy were devised to find a solution to the wave of undocumented foreigners arriving in Chile over the last five years. Chile’s steady economic growth, political stability and relatively open job market has made it one of the more attractive destinations for regional immigrants in recent years. It’s evidenced by an influx of migrants, many from crisis-hit Venezuela, the Dominican Republic and Haiti.

“The community of Haitian citizens numbers around 120,000 and we believe that for practical purposes we have to help their children and spouses to come quickly and without obstacles to this country,” said Chilean Undersecretary of the Interior, Rodrigo Ubilla in quotes published by Inter Press Service News Agency.

By any measure, the influx of migrants to Chile has been significant. In 2014, there were fewer than 1,800 Haitian migrants in Chile. By April 2018, there were nearly 120,000, according to official figures. According to the Chilean judicial police, in the six months between 1 January and 26 July 2017, over 44,200 Haitians entered Chilean territory. It was a 75 per cent increase from the previous year and has shown no signs of slowing down without changes to the national migration policy.

Upon arrival, many Haitians find low-paid jobs in the labour market where Chileans are reluctant to work, particularly in construction, domestic service and agriculture.

In Port-au-Prince Haiti, IOM set up the visa processing centre’s facilities, systems, and human resources in under a week’s time. Processing capacity is up to 40 interviews a day or more, based on demand.

“Establishing safe pathways to migration is key. IOM established a dedicated website (https://haiti.iom.int/cavc/) with Frequently Asked Questions and set up a hotline for immediate assistance via the Chilean Visa Service Centre. Calls may be made to +509 2947 7746 or +509 2991 0362 from 7:30am to 4:00pm.  These mechanisms help to ensure that migrants make informed decisions and don’t fall victim to exploitation,” said IOM’s Martin.

Haitians looking to join their families in Chile can now register for an appointment through IOM’s online system, accessible through https://haiti.iom.int/cavc/rendez-vous.