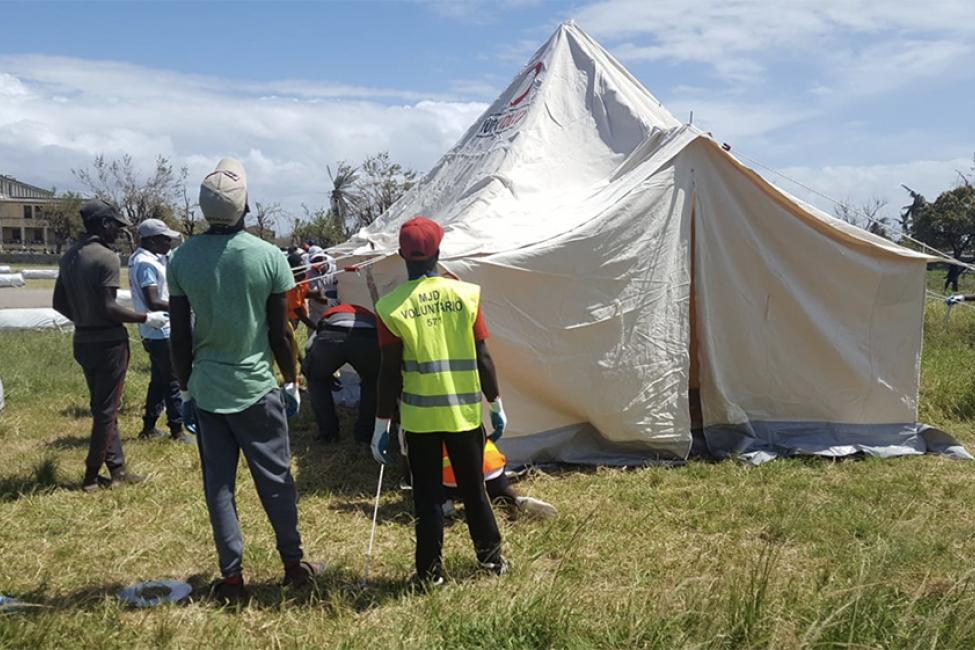 Beira — Work was nearly completed this week to allow displaced Mozambicans in this ravaged coastal city to shelter in two new sites. This work is being carried out thanks to assistance from the International Organization for Migration's (IOM) local and global partners — including government and humanitarian donors from Italy, Turkey and Brazil — under the leadership of the national disaster management authorities.

The two new sites will house nearly 2,000 men, women and children whose homes were destroyed on 14 March when Cyclone Idai made landfall across a vast swath of Mozambique, Zimbabwe and Malawi.

Yesterday (4 April) an IOM team supervised the final installation of 56 tents donated by the Italian Agency for International Development and Cooperation (AICS) on the outskirts of Beira at Sao Pedro Claver parish grounds, on land made available by Beira’s Catholic diocese. The site was graded with earth movers and tents were put up with the assistance of 25 firemen deployed by Brazil’s national army.

The Sao Pedro site is one of several consolidated sites on the outskirts of Beira being established to allow thousands of Mozambicans to vacate the public-school and hospital buildings where many displaced families sought safety after Cyclone Idai swept through the region three weeks ago. The government of Mozambique’s National Institute for Disaster Management (INGC) has asked IOM and other international humanitarian agencies to provide shelter and clean school grounds so classrooms can reopen for students and teachers beginning this week.

“We are very grateful for the many donors who have come on board, including African countries who have shown solidarity in providing in-kind assistance,” Abdiker said. “What is missing right now is financial support towards the appeal, which is currently only funded at 18 per cent for all agencies.”

So far, IOM and its humanitarian partners have provided shelter assistance to more than 38,000 people in Mozambique, but more support is needed to assist the more than 400,000 people whose houses were damaged or destroyed.

As of 4 April, the death toll in Mozambique from the natural disaster has reached 598, with as many as 130,000 now living in 129 temporary emergency sites across Sofala province where Beira is the largest city. The death toll is expected to rise as flood waters recede and search and rescue operations continue in the coming days.

Beira and surrounding areas have also been hit by an outbreak of cholera with 276 laboratory-confirmed cases. A weeklong vaccination campaign targeting 900,000 Mozambicans began on Wednesday (3 April) including at emergency sites established by IOM.

IOM is preparing a second temporary accommodation centre for displaced persons at the Samora Machel secondary school closer to Beira’s commercial centre. The site will shelter 1,400 Mozambicans thanks to a large donation of tents provided by Turkey’s Red Crescent. Student volunteers working with Mozambican soldiers supported setting up the tents.