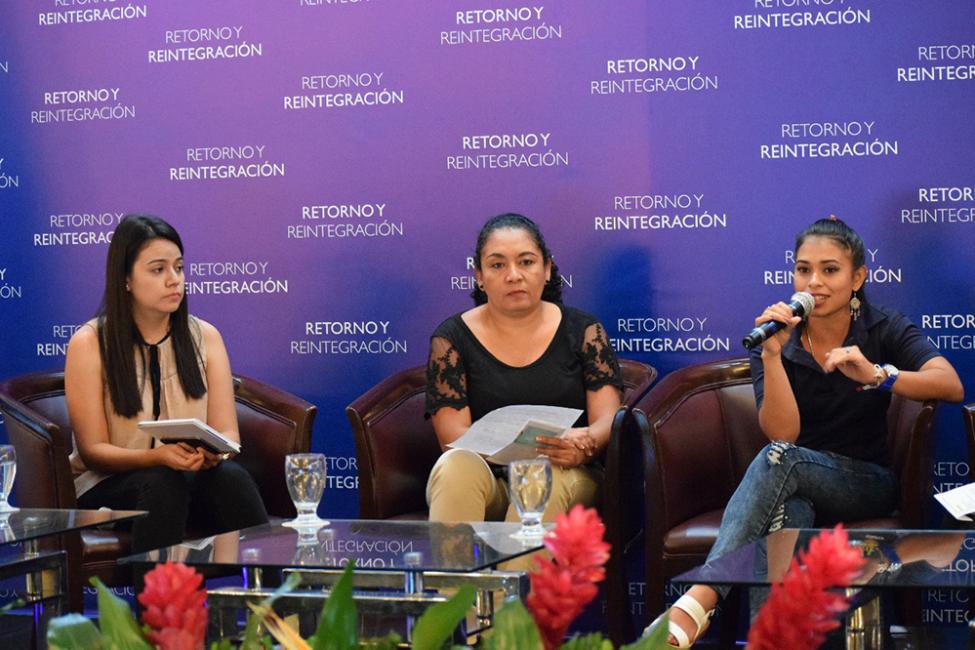 Nelsy, Lesbya and Angela (left to right) were among the more than 45,000 migrants who returned to El Salvador, Honduras and Guatemala from Mexico (54%) and the United States (46%) in the first three months of 2018. Photo: Miguel Gómez / IOM

The meeting took place within the framework of the Return and Reintegration project for the Central American Northern Triangle, implemented by the UN Migration Agency (IOM) with funds from USAID.

The Central American Northern Triangle (El Salvador, Honduras, and Guatemala) is one of the regions with the most significant experience in the reintegration of returned migrants. Only in the first three months of 2018, more than 45,000 migrants were returned to these three countries from Mexico (54%) and the United States (46%). Most of returned adults are men (84%), and 12 per cent of all returnees are children.

Returned migrants this year (January-March) increased by 20 per cent as compared to the same period last year, although they are less than the 54,000 returnees in the same period of 2015.

During the meeting, lectures, discussion panels, and working groups were held to analyse current migratory trends, reintegration strategies, challenges related to return migration and recommendations to strengthen laws and public policies, both on national and regional levels. They shall also serve to enhance existing programmes through the exchange of good practices and identify ideas for the generation of new response actions.

"One of the strategic approaches of IOM is to promote, facilitate and support regional and global debates and dialogues on migration. We aim to promote understanding about the opportunities and challenges that migration brings, as well as the identification and development of effective policies to address them. This also includes the fight against the stigmatization associated with returnees since, sometimes, it prevents their reintegration," said Jorge Peraza, IOM Chief of Missions for El Salvador, Honduras, and Guatemala.

"Every person in this room is dedicated to improving the lives of other people, and we are here to learn from their experience. Some of you have decades of work on issues of migration and reintegration of people. And as for the support of the United States in this area, we are one hundred per cent committed to finding solutions with you," said Jean Manes, Ambassador of the United States to the Government of El Salvador, at the meeting’s opening session.

The inauguration ceremony was headed by Jean Manes, Ambassador of the United States to the Republic of El Salvador; Bárbara Feinstein, Deputy Assistant Director of the USAID Office for Latin America and the Caribbean, and Jorge Peraza Breedy, IOM’s Chief of Mission for El Salvador, Guatemala, and Honduras. Representatives of other cooperation agencies and officials from Colombia, Ecuador, El Salvador, the United States, Guatemala, Honduras, Mexico, and Peru were also present.

Other activities implemented by this project are the National Survey on the well-being of children and young people, and the construction and suitability of public spaces that facilitate social cohesion, community development and incorporation processes of returnees to their home communities.