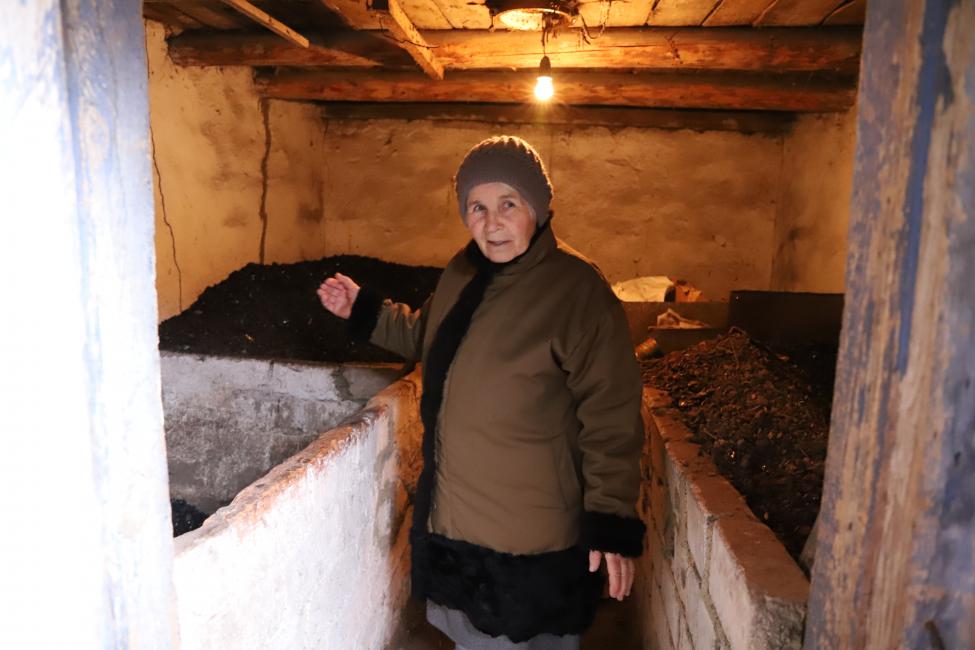 Lidiia is 80 years old and lives alone: her husband passed away ten years ago. Her son, who has a disability, now lives at a nursing home because Lidiia can no longer take care of him.

Her heart-rending story is similar to that of many others who have remained in Ukraine’s conflict area despite the shelling and lack of services, who continue to live off their small gardens and livestock.

And now they have a new challenge: COVID-19.

In the sixth year of conflict in eastern Ukraine about 3.4 million people are in dire need of humanitarian assistance and protection; 1.9 million of whom live in the non-government-controlled areas. “IOM is mobilizing resources to help those most affected by the long-lasting conflict and the latest health emergency caused by COVID-19, and to provide communities with solutions to help them through,” says Anh Nguyen, IOM Ukraine Chief of Mission.

Lidiia is one of 5,000 vulnerable residents of the non-government-controlled areas of Donetsk and Luhansk regions who stayed warm this winter thanks to three tons of coal provided to her by IOM with financial support from EU Humanitarian Aid.

She and hundreds like her – elderly residents of eastern Ukraine’s conflict area – are strong and amazingly resilient to the hardships caused by the hostilities which have endured since 2014.

Currently, they face even more isolation and ordeal, as movement limitations are imposed and provisions are hard to find, due to the health emergency caused by the COVID-19 pandemic.

“Last year, I had to invest all my savings in a new well as my old one could not be used anymore, and now I spend a significant part of my pension on medicines, so I had no money to buy coal myself,” says Lidiia.

With funding from the EU, IOM also provided 500 vulnerable families with electric heaters.

The project also ensured rehabilitation works at medical facilities, geriatric centres and centres for people with disabilities. Seventy per cent of patients seeking health care in the conflict-affected areas of eastern Ukraine are elderly. Even before COVID-19 visiting a doctor was an additional health risk for them because of the leaky roofs and draughty rooms in many clinics and hospitals. Underfunded long before the outbreak of the conflict in 2014, medical facilities in the area now face collateral damage due to shelling and aging infrastructure, while the locally available funds for refurbishment are scarce or non-existent.

In response, IOM and the EU have funded repairs to five medical institutions, located in non-government-controlled areas of the Donetsk Region. New windows, doors and roofs, boilers and upgraded heating systems have benefited 3,000 vulnerable people. “We had to put buckets everywhere to catch the rainwater leaking through the roof before, but this was not a solution. The support was critical for us,” says a hospital staff.

“Some people stay with us for days, others for months, and our job is to make it as bearable as possible,” shares the director of an understaffed and underfunded hospice for cancer patients. “We have to replace everything, often even the mattress, after each patient. The kits we received are much needed as they will make people with terminal cancer more comfortable,” the doctor says.