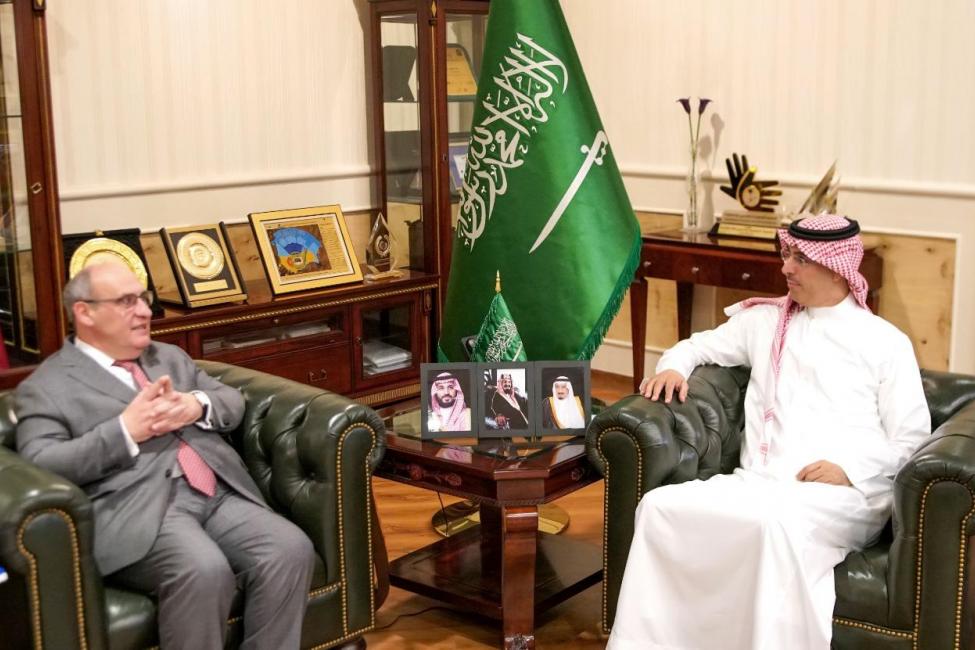 Riyadh – This week, the International Organization for Migration (IOM) joined the Kingdom of Saudi Arabia’s National Committee to Combat Human Trafficking (NCCHT) and the United Nations Office on Drugs and Crime (UNODC) in launching a National Referral Mechanism (NRM) which outlines best practices and pathways for handling cases of trafficking in persons.

“It works in harmony, simultaneously, with a leading UNODC programme focusing on partnership, prosecution, and data management. The collaboration is a welcome and timely step into international collaboration on the subject of trafficking.”

The mechanism is a collaborative framework that helps government officials to coordinate their efforts to better prevent trafficking in persons and protect victims or potential victims of human trafficking in the Kingdom and coordinates the investigation and prosecution of suspected perpetrators.

With an estimated 13 million foreign workers (38.3 per cent of an overall population of 34 million people), this move stands to dramatically improve protection measures for a significant number of people.

Men and women – primarily from South- and Southeast Asia and Africa – voluntarily migrate to Saudi Arabia to work in a variety of sectors, including construction and domestic service. Some workers can become vulnerable to forced labour and other forms of exploitation.

The launch of the NRM marks the Government of Saudi Arabia’s commitment to reaching and protecting the most vulnerable segments of society – including men, women, and children.

“Human trafficking is an affront to the dignity of all humanity,” said Dr. Awwad Alawwad, Chair of the NCCHT.

“It is our duty to eradicate this heinous practice and I am proud to report that the launch of the National Referral Mechanism is a major step to that end. The Mechanism will be complemented by additional human rights reforms which will further improve the quality of life of all citizens and residents of the Kingdom – barring none.”

The NCCHT, in collaboration with the UNODC and IOM, has begun to jointly train key members of the national anti-trafficking team in their respective roles, as well as skills in identification, referral and protection of potential victims.

In light of the ongoing COVID-19 pandemic, the government is working closely with all parties to ensure that this valuable training continues through the use of teleconferencing. Key staff, including labour inspectors, health professionals, and civil society representatives will learn a number of new skills depending on the roles mandated to them to help identify early warning signs of human trafficking and develop standard operating procedures to guide response staff.

“This ambitious training and capacity building programme led by NCCHT for the entire stakeholders nation-wide, and the fact that it continues even during the unfortunate pandemic, reflects only the level of commitment and determination KSA attached to improving national mechanisms and responses to trafficking in persons,” said Dr. Hatem Aly, UNODC Regional Representative for the Gulf countries.

The unveiling of the Mechanism coincides with the launch of an anonymous digital reporting service, embedded in the NCCHT website, for persons with information on possible human-trafficking violations in the Kingdom. The referral service will be expanded to include a 24/7 hotline and mobile application, both of which are currently under development.

IOM’s Mohamed El Zarkani explained: “The launch of the NRM is a key milestone in the fight to combat trafficking in persons in the Kingdom of Saudi Arabia. This move forward, along with a strong programme of training for frontline workers who will implement it, will lead to enhanced protection measures for the most vulnerable, bringing Saudi Arabia amongst the countries leading the fight against this transnational crime.”